S. Upendran
Hey, why are you reading this article, you dunce? Don’t you have anything better to do, you blockhead? Listen, if you don’t like what I’m saying, just turn the page, idiot. Did the words ‘dunce’, ‘idiot’ and ‘blockhead’ make you wince? It’s strange, isn’t it, that three words which we use liberally in our everyday conversation – especially, when the topic revolves around our students or administrators – should get us worked up when they are directed against us? Stranger still is the fact that when these words began to be used in the language, they didn’t have anything negative associated with them. The words ‘idiot’ and ‘blockhead’ were neutral words to begin with; ‘dunce’, on the other hand, was complimentary!Let’s take a ‘dekho’ at how the meanings of these words changed. 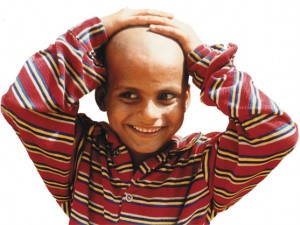 Let’s begin with something nobody likes to be called: ‘idiot’. The word comes from the Greek ‘idios’ meaning ‘peculiar’ or ‘private’, and in ancient Greece anyone who did not hold public office was considered a ‘private person’. Since only a small percentage of the population held public office, ancient Greece was teeming with idiots! Some of the well-known ‘idiots’ of the time were Plato, Aristotle and Socrates! With the passage of time, however, the meaning of ‘idios’ gradually changed. From a person who did not hold public office, it evolved to mean a person who was incapable of holding one. From this, the word came to mean ‘mentally deficient’.

You may be interested to know that the word ‘idiom’ is also derived from ‘idios’. Unlike ‘idiot’, the word ‘idiom’ retains its original meaning – ‘peculiar’. An idiom is very peculiar because there is no connection between the meanings of the words that make up the idiom and the meaning of the idiom itself. For example, when we say that someone has kicked the bucket, we don’t mean that the person has literally kicked a container used for storing water. We mean that he is dead.

Now let’s move on to the second neutral word on our list: ‘blockhead’. Man has found a cure for many things: malaria, chicken pox, polio, etc. One thing that he hasn’t yet found a cure for is baldness. What did kings and queens do when they were confronted with a receding hairline? They began sporting wigs. Julius Caesar is believed to have worn one to cover his bald pate. His ladylove Cleopatra sported wigs which were adorned with gold and silver. In 16th and 17th century Europe, wigs became a raging fashion; both men and women, irrespective of whether they were bald or not, began to wear wigs. The richer you were, the more wigs you had; and the higher your status, the bigger the wig – hence the expression ‘big wig’. When the wig wasn’t in use, it was placed on a block of wood shaped like the wig wearer’s head. This block of wood was called a ‘blockhead’! So the original meaning of blockhead was something you placed a wig on. Since the blockhead was shaped like the human head and had nothing inside it, it soon began to mean a person of very low intelligence. Charles Schulz, the creator of the Peanuts cartoon strip made this word very popular. Lucy, the girl with the big mouth, often refers to Charlie Brown as ‘blockhead’… and she is absolutely right! When you think about it, poor Charlie Brown’s head does look like a blockhead, doesn’t it?

If someone had called you a ‘dunce’ in the 14th and 15th century, you would have taken it as a compliment. The word comes from the name of John Duns Scotus, a priest who taught in Cambridge University in the 13th century. He was a scholar who wrote several books on philosophy and logic; the followers of his teachings were called ‘Dunces’ or ‘Duncemen’. Both, his books and the followers of his teachings were treated with great respect till the 16th century. It was the age of the Reformation and John Duns Scotus’ reputation took a beating as new thinkers attacked his teachings, and subjected them to ridicule. The people who remained loyal to the priest’s teachings were labelled ‘stupid’ or ‘ignorant’. In this way, the word ‘dunce’ slowly began to mean a ‘dull man’. The 17th century English poet, Alexander Pope, made fun of John Duns Scotus in his poem, ‘The Dunciad’, meaning, ‘the empire of dunces’.