The National Education Policy 2019 looks at 0-3 years as a critical period for the development of the infant. Specifically, it says that, “During the ages prior to three years, quality ECCE1 includes the health and nutrition of both the mother and the child, but also crucially includes cognitive and emotional stimulation of the infant through talking, playing, moving, listening to music and sounds, and stimulating all the other senses particularly sight and touch. Exposure to languages, numbers, and simple problem-solving is also considered important during this period.” (Pg. 46)

The question then arises, how can we as parents as well as teachers, provide a conducive environment for the child’s development in this stage? Which is also in the direction of providing exposure to pre-literacy and pre-numeracy skills, till the child starts going to pre-school? What are some of the ways to create a stimulating environment where the kids can explore, experience and in the process learn things, without stress, without burden and expectation. In this article, I share some of my experiences of how the combination of storybooks and play, have magically and fascinatingly, led my two-year-old into some pre-numeracy concepts.

Read-a-louds have formed a part of our daily routine, since the toddler was six months old. An unassuming, bilingual book called the ‘Line and Circle’ by Radhika Menon sparked his interest when he was about a year old. He continues to bring it back for reading time and again. It is illustrated by Trotsky Marudu and has served to be brilliantly effective in introducing him to the line and the circle. It’s a simple book which shows how the line and circle can be used together to form different things that we see everyday in our environment like a tree, bird, fruit, sun and so on. Folk toys inspire the illustrations in the book. The toddler enjoys looking at the big, full-page pictures and naming the objects. He also points out where the lines and/or the circles have been used in creating the pictures. 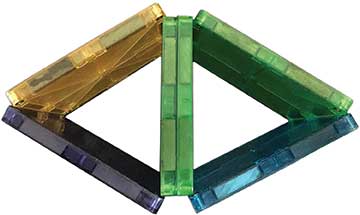 This has led him to explore circles and lines in many different ways including drawing, gestures, playing with clay, blocks and dough, to name a few. When given a chalk, he likes to make small and big and repeated circles. Sometimes he names them as circles but sometimes the circles are also symbolic of other objects like the balloon, the sun, a snake and so on. It is definitely a round but also some other object along with that! He also arranges his blocks, pillows, utensils or any other thing that he is playing with, in lines sometimes. The moldable nature of the play objects has led him to understand that the shapes are not static but are versatile and dynamic in nature. Shapes can be big, small, 2D, 3D, concentric, can represent multiple things and so on. Interestingly, while playing with moldable materials, the shapes don’t stop at the basic ones, the ones that we can name or a child is introduced to initially in a formal set-up. They go beyond the ones that we can name currently. The point is that starting with the book and going on to play with the blocks, clay or magnetiles2, have established as well as broadened the idea of shapes for the toddler. I think he understands that shapes can be anywhere and everywhere, in fact they are all around us! 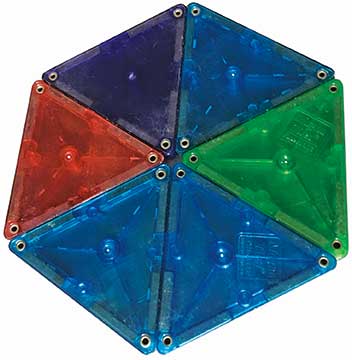 Starting from the illustrations in the book, the concept of the basic line and circle has expanded to a variety of things in his brain. These shapes are thus not disconnected to his life but instead are closely linked to his everyday experiences. While story-reading and play with different materials is magical in its own way, this unforced association of both has led to visible sprouts of introductory mathematics, such as pointing to circles and shapes on bedsheets, mats, clothes or counting vegetables and fruits when putting them inside the fridge and so on. This is absolutely delightful to see and experience. Contrast this to an introduction of making a standing line and a sleeping line while trying to learn writing the alphabet. Done in this playful and natural way, the lines and circles form whole words, sentences and experiences for the child. What a vast difference from the mechanical way of starting writing or learning about the beauty of shapes! 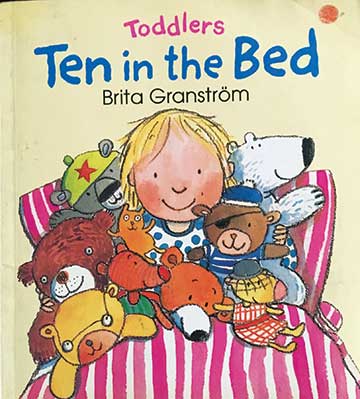 Similarly, an initiation to numbers has also happened through story books like ‘1,2,3 to the Zoo’ by Eric Carle, ‘One, two, tree!’ by Anushka Ravishankar, Sirish Rao, Durga Bai, ‘Ten in the Bed’ by Brita Granstrom, and ‘My very first number book’ by Angela Wilkes. In the book ‘One, Two, tree!’ and ‘1,2,3 to the Zoo’, the authors have used animals who are climbing up the tree and are going on the train to the zoo. Also, in two of these books namely ‘Ten in the Bed’ and ‘One, two, tree!’, the story is actually written like a poem. He has enjoyed these books but clearly what has captured his attention and is delightful for him are the pictures, the animal characters, the sounds, the rhythmic text, the familiar objects used and not the counting. However, in the process of repeated read-alouds, he has been introduced to the concept of numbers and has also picked up counting in sequence from 1-10. The natural extension has been trying to count whatever we come across during the day like dogs, trees, food items, body parts, stairs and so on. As of now, out of these ten numbers, the numbers 1, 2 and the idea of ‘many’ are completely understood by him. They are concrete now and no longer abstract. (For instance, 1 nose, 2 hands, many leaves …)

These read-alouds with my child have re-affirmed my belief that the idea is not to mechanically teach the toddlers about pre-numeracy concepts but to keep the joy of reading alive, along with providing them with meaningful extension activities, which are related to the toddler’s life and sense of purpose3. This broad-based approach fosters the child’s development in multiple dimensions along with the un-stressful and fascinating introduction into the beautiful world of math.

1. Early Childhood Care and Education.
2. Magnetiles are toys. See here: https://amzn.to/2qearY6.
3. These words have been used by great educationists like Vygotsky and Jane Sahi amongst others…

The author is fuelled by the desire to work meaningfully in education for the development sector. She has worked in fundraising, action-led research, program implementation as well as monitoring and evaluation in the last 7 years. She can be reached at [email protected].