They may be doing well generally in life and in vocations of their choosing, but my children make me truly happy when they are physically active.

Watch a person after he has done some hectic physical activity. He will look exhausted, but he will look calm too, unless of course that physical output has been in a competitive setting which gives you another benefit, but that’s for later. First, let me address physical activity of the kind that gets you to just run or walk, jump or dance. You don’t need to do exhaustive research on it because you will feel it, that happy feeling, the endorphins getting released in your body, the happy hormones changing your mood.

Nothing can anger or stress you out when you are in this state, you just react differently to the same ‘trigger.’ When you are all sweaty after an hour at the gym, you just handle stress better. 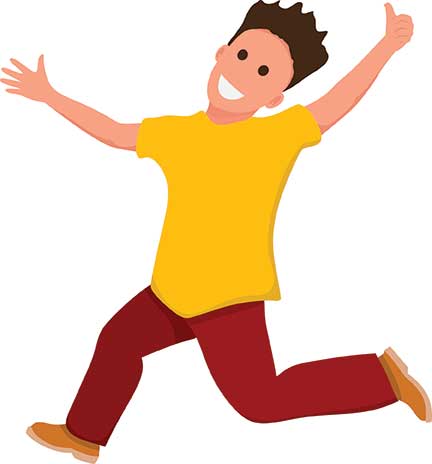 The thing is, our body is supposed to be active, it’s like a car that just rusts away when it’s lying idle. I just paid a bomb to get the brake lines of my car repaired, the mechanic said, “Sir, the brake line caught rust because your car was idle.” The interesting trait in us is that just like we can get used to good habits, we can also get used to the bad ones.

I have gone through phases in my life where I have got used to low activity days, but when I am in the phase of high activity and intense training, one easy day without exercise makes me feel rotten. So be careful, give it some time and you will easily fall into either of these traps – the two extremes, ‘full on’ activity one and the zero activity too.

I discovered I was getting less upset at home when I was in my active phase, I have three close members in my family and they are great at pushing my buttons, so ‘be active or perish’ is my motto when it comes to my wife and my two kids. Yes, they like me better when I am going to the gym five days a week.

Apart from a healthy mind, the fringe benefits of being active are that you start looking good too and who does not want to look good? People lie when they say they don’t care about how they look, what they are actually confessing too is that it’s just too hard to look good. I guess they just don’t want to put in that effort.

You are born with certain features, that’s god given, the uncontrollable, but to be fit and look healthy is in your hands. A fit person is an attractive person, and let’s face it, attractive people just get a better deal out of life.

If not anything, a fit and healthy person is saying that he is disciplined, and isn’t that what successful people keep saying? To be successful you have to be…yes, disciplined.

Now let me share with you the advantages of being involved in a competitive sporting setup like playing cricket, football, tennis or swimming, even if it’s for your school or college team.

Remember how the coaches keep saying that you have to give your 110 per cent no matter what, not to give an inch to the opposition. “No one remembers a loser,” he will bark in your ears in his motivational talks. And you go out and do exactly that and you still lose. Now what do you have to do when you lose? Yes, become humble the next instant, you drop the ‘win at all costs’ attitude, accept the fact that you came second best in the contest and shake hands with the opponent who just gave you a sound beating.

That’s what sport does; it forces you to experience and manage two polar opposite emotions in a matter of seconds. Fight like there is no tomorrow to win, and then in the next instant, accept defeat gracefully.

Imagine the kind of control you need over your mind. Sport trains you for this from an early age. It’s one of the greatest life gifts, even if you don’t become a serious high level sportsperson. Sport also makes you slightly thick skinned, helps you take things in your stride, be less sensitive as a person, invaluable qualities to have in an unforgiving, tough, outside world.

Teasing and banter within the team is a constant, it’s the lifeline of team sport and if you don’t like being teased, you will get teased even more!

Finally, you will always have more money than that other guy who is not as healthy. Less of chemist’s bills you see.

The author is a former international cricketer who represented his country in more than 100 matches. He is now a cricket commentator. He can be reached at twitter @sanjaymanjrekar.