In the last column (Teacher Plus, January 2012), I had written about a balance that could be constructed using drinking straws, pins, cups and other common objects. The design and template figures are taken from ‘Small-Scale Chemistry’ Laboratory Manual. The design looks elegant and easy to make. What follows now is an account of how the construction of the balance worked for me, with all the difficulties inherent in moving from a US context to an Indian one. 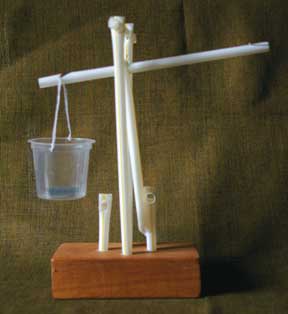 The base was made using a 6mm drill bit. The holes were too small and needed to be converted to 8mm. The next difficulty was to find a punch that punched holes of the right size. All the punches available made holes that were too small for the straw. Trying to get one straw to fit into another snugly took some thought, make a cross cut (+) and the inserted straw wobbles. You can snip a diamond shape (<>) with scissors, but again the fit is not snug. It is difficult to cut a circular shape. Will a heated nail be the answer? Finally, I found a punch of the right size. The next problem (challenge) was the insertion of the straws through the punched holes. The figures show the straws neatly nestled into each other but I found that they squashed and wouldn’t go through. Putting a pencil in the straw before pushing it in helped. Once these difficulties were sorted out, the balance was easy to assemble (photo). A wire tie was used to hang the cup from the notch.

The pointer shows that the beam is horizontal and also indicates the zero point.

The zero point is the point that shows that the beam is horizontal, i.e., balanced. If the balance is reliable, it should not move from one weighing to another.