Hey I am super excited to share some bad news from my life. Hope you too have loads of such news!

Bad news # 1 – My child is stuck to gadgets and electronics!
A 7-year-old is spending a lot of time with his Tab. There is no time limit to being with electronics – TV, mobiles, computers, and so on, He can keep playing all the time. He is driving trains of all kinds in his games. He does not like to read or write, he does not like to do other things around the house. He is sitting in one place all the time with his Tab!

There is good news here!

So, who am I to decide what the child wants to play with, what he should be interested in, to say that being a Loco pilot is no child’s play? 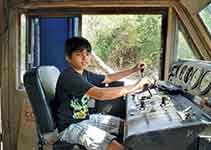 Bad news # 2 – My son does not want to learn how to swim, he says ‘NO’.
When my son was 4 years old, we sent him to a summer camp. Swimming was one of the activities in that camp. After the first day of the swimming class, he was crying and very anxious. He said that the ‘Uncle’ pushed him and he was going to die. He was very scared to go to the pool and did not want to swim.

The coach believed that if he was pushed into the water a couple more times, he would automatically learn how to swim. My son resisted and rejected the coach’s attempts and cried out louder. I told the coach that my child did not want to swim and to not force him.

All the other children in the camp are trying…playing in the water, some are swimming. My son is talking to his best friend who is a great swimmer. Wonderful!

It was the end of summer and the summer camp was over and we did not care about swimming anymore. The next summer, my son continued NOT to venture into the swimming pool.

Many times when the family went out to beaches, resorts, pools, someone was kind and enthusiastic about teaching Pranav how to swim. Every episode led to frustration in the adult and tears in Pranav. What are the adults learning here?

He is also compared with other children who can swim, and people tell him it’s so easy, you can also do it. He has been told by family members that swimming is a life saving skill, “Didn’t you see the movie, Life of Pi?”

It’s great that so many people are finding so many ways to get Pranav to swim.

All this is such good news to me because we have a great opportunity here!! The child is scared and the child does not want to get into the pool. Great!! He is learning about himself, his fears, people, motivation, what he wants to do, and definitely is learning to make his own decisions.

I think a child is capable of learning by himself. He can express his learning needs and find them when he is ready in the manner he wants. It’s not my job to motivate him to swim, to push him to swim, to advise him how to do it, to overcome his fears, or even tell him that he has to swim.

Bad news # 3 – My pre-school children are struggling with an activity
A pre-school activity was in progress. A group of 10-12 children in the age group of 2-3 years were at it. There was a cut-out of a tree put up on the wall and cut-outs of many mangoes were stuck on the tree. The mangoes had to be collected as part of an activity. Some were easy to pick, some were a little challenging to reach and one was placed high enough that no child in the class could reach it.

Good News! Some children were disappointed, some were upset, some gave up.

They put in efforts, in different ways, to reach the fruits. Some stood on their toes and used just two fingers, some jumped, some helped others reach by very gently lifting them up and others encouraged their friends to reach the fruits. One child found a stool, brought it near the tree, and used it to get the last fruit down. The whole group rejoiced at getting the last fruit down. A sense of achievement filled the air and lit up the faces of our determined pre-schoolers. 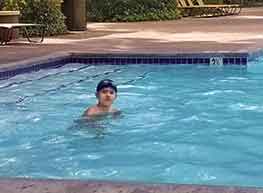 Bad news # 4 – My child did not win a medal in the race.
My child came fourth and lost his chance to win a medal in a running race. He came back with a droopy head and was sobbing that he did not win. We figured out that the next time he could run a race in his school was after two years. As there was no chance of another race for a long time, he could forget about winning one.

Wow!! This was such a great moment. My son was crying because he did not win the race. But really, this was a time of celebration! The runner began running, and from then on no one could stop him. He practised running in the breaks, during lunch time, called friends to race with him, found out who his competitors were, and began setting his own targets.

Not winning a race was his opportunity to explore his potential and experience what he could do. In the process, he developed perseverance, determination, persistence, learned strategy and how to set goals and so on. So, it clearly was a time to celebrate when he lost that race, wasn’t it?

Bad news # 5 – My fourth grader wants to get married.
We all have a dream about something we want to achieve sometime in life. My son is day dreaming, wondering whether the girls in his class like him. Trying to impress them, do things for them, behaving like a gentleman. His dream is to marry a smart girl!!

Some children tease him saying that he likes girls.
He even wants to kiss a girl.
Great opportunity!

He talks to me about how he feels about what one girl said or the other girl that he is attracted to. Isn’t he learning how to acknowledge his feelings?

We love to talk about girls, what looks good on them, how some hairstyles are cool, about fashionable dressing accessories that girls wear. Presentation is important, aren’t we taught that?

We think that he should invite more of his girl friends to come over and play with him. Shouldn’t they get an opportunity to interact more?

Girls like him because he can be very funny and he makes them laugh. Isn’t he putting efforts to realize his dream?

Many of the parents of his girl friends have told me that their daughters enjoy Pranav’s company. Wow!! I feel great as a mother.

Sometimes they talk over the phone with him for a long time too. Isn’t it nice that boys and girls can bond and have conversations?

I appreciate that my son feels, expresses, desires and shows his appreciation of style, beauty, and girls. Isn’t it important to encourage him?