A couple of months ago, I watched Angelina Jolie’s film ‘Salt’, a story about a CIA operative whose solution to any problem is to whip out a gun and shoot her way out of it. Like most thrillers, one had to suspend disbelief to enjoy the fast-paced action. As I sat enthralled, watching Ms. Jolie jumping from one speeding truck to another, I wondered if the heroine, one of the highest paid actors in Hollywood, was actually worth her salt. Do producers really end up making money by casting her in films like Salt? Googling the actor and film suggest that she most definitely is; according to various Hollywood sources, the movie made well over 300 million dollars at the box office, and there are already talks about a sequel.

Angelina Jolie as Evelyn Salt is definitely worth her salt, no question about her being worth her salary. Nowadays, potential grooms and brides are on the look out for a partner who has a five figure or six figure salary. Just imagine the amount of salt one could buy with that kind of money! In case you are wondering why I am fixated on the word ‘salt’, it is because the modern word ‘salary’ comes from the Latin ‘salarium’ meaning ‘salt allowance’. Yes, that’s right, the original salary was nothing more than a nominal sum given to someone to buy some salt – and that too, the non-iodized variety! 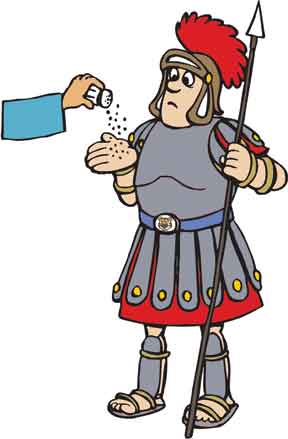 During the times of the Roman Empire, when supposedly all roads lead to Rome, soldiers used to receive their wages partly in cash, and partly in kind. They were given money and a packet of salt as part of their weekly/monthly allowance. This essential ingredient used in all forms of cooking was a rare and precious commodity at that time. All of Europe was importing salt from other countries because the cold and damp weather on the continent made it impossible for people to manufacture salt. This is why the Romans gave their soldiers salt as part of their wages; since the rise of the Roman Empire depended heavily on the disciplined soldiers, the Emperor ensured the soldiers ate well and enjoyed what they ate. Later, when salt became available in plenty, instead of giving them a packet of the ingredient, soldiers were given a special allowance with which they could buy salt. This special allowance was called ‘salarium’.

So the ‘salary’ that we so proudly bring home every month is nothing more than a ‘salt allowance’. Hard to swallow, isn’t it? Perhaps you are taking everything I have written so far with a pinch of salt. Ah, another idiom with ‘salt’. We know that when someone tells us something, and we take it with a ‘grain’ or ‘pinch’ of salt, we do not totally believe everything he has said. We have certain reservations; we are sceptical about some of the information that has been given. Now, this particular idiom which has been part of the English language since the mid 17th century is actually a translation of the Latin ‘cum grano salis’. According to some scholars, Pliny the Elder, in his book Naturalis Historia, wrote that Pompey (Julius Caesar’s son-in-law) had discovered that his enemy, Mathridates, had found the perfect antidote to poison. Pliny said that for this antidote to work effectively, it had to be taken with a pinch of salt! Readers however thought that the reference to salt was a tongue-in-cheek remark: something that was not to be taken seriously. Another theory which has been put forward is that the idiom comes from the world of dining: a sprinkling of salt from the cellar can give life to something that is insipid.

The humble salt cellar on the dining table was not only used to make food palatable, but also served as a marker of an individual’s status. For example, the idiom ‘sit below the salt’, a rather old-fashioned expression, is sometimes used to refer to a person of very low status: someone with little or no social standing; someone who is generally looked down upon by others. This rather quaint expression has been around for over four hundred years. In the past, when guests were invited to dinner, a relatively large salt shaker was placed in the middle of the long dining table. The most important people among the guests were always seated next to the host. These individuals who were seated at the host’s end of the table were considered to be ‘above the salt’ – in other words, they were people of very high social standing. Guests who were of a lower rank, sat at the lower end of the table; they sat ‘below the salt’.

I guess ‘sitting below the salt’ is something that Anjelina Jolie doesn’t have to worry about. Most hosts would give an arm and a leg to have her sit next to them. In case you are wondering when Salt II is being released, it all depends on when ‘Evelyn Salt’ returns to the salt mines!