S. Upendran explores the quirks of language and of teaching in this monthly column. 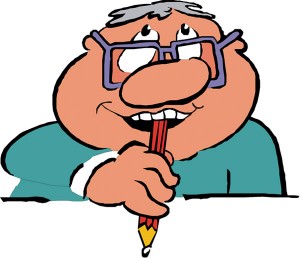 What is it that we have against left-handed people? Why is it when a student writes with his left hand, some teachers order him to use his right, instead? Why is it that we teach our children that the right hand must be used when we offer or receive things? What is so right about being right-handed and what is so wrong about being left-handed? Why the prejudice against the lefties? Are we persecuting them because they happen to be in the minority? (Research suggests that only 8 to 15 percent of the people in the world are left-handers.) In the case of English, this prejudice seems to be inbuilt into the language; let’s face it, as far as languages go, English is definitely ‘anti-left’!

The bias that people have against left-handers is neither local – it isn’t confined to India- nor is it of recent origin. People have always looked at lefthanders rather suspiciously. Europeans believed that Satan was left handed, and therefore all ‘southpaws’ were seen to be doing the Devil’s work! Lefties were often burnt at the stake for not mending their ways. One needs to only look at words and expressions associated with the word ‘left’ to note how biased the English language is against left-handers. Take for example, the word ‘sinister’ – not a word that anyone of us would like to be associated with since it carries with it the idea of being ‘evil’. The word comes from the Latin ‘sinister’ and means ‘left (handed/side)’. The French word ‘gauche’ which is currently used in English to mean ‘awkward’ or ‘clumsy’ originally meant ‘left’ or ‘left handed’; left-handers, in general, were believed to be clumsy or awkward. The Irish word ‘ciatog’ used to refer to left-handed people means ‘strange person’. When an American says that you are ‘out in left field’ what he means is that he finds you ‘weird’. The sense of evil/bad that the Europeans associate with the left side is reflected in their everyday practices as well. When Europeans wish to ward off evil, what is that they do? They throw salt over their left shoulder; this is to drive away the Devil who is believed to sit on an individual’s left shoulder. If your left palm itches, what does it indicate? It means you are going to lose money. Similarly, if there is a ringing in your left ear, someone is angry with you and is therefore cursing you. When someone wishes you to put your best foot forward, which foot is you supposed to move first? The right one, of course; moving the left is a no. When someone plays you a left-handed compliment, he’s not paying you a compliment at all. In fact, he’s insulting you inflatable elephant jumper.

In sharp contrast to this, all words associated with the ‘right side’ have a positive connotation. For example, a person who is highly skilled at doing something is usually referred to as being ‘dexterous’. The word comes from the Latin ‘dexter’ meaning ‘right handed’. Someone who can use both hands equally efficiently is called ‘ambidextrous’ – what you are implying is that the person has two right hands! Another word which has the same meaning as ‘dexterous’ is ‘adroit’; it is derived from the French ‘a droit’ which means ‘to the right’. Everyone wishes to be the top man’s right hand man and not his left! If your right palm itches, you are going to receive money, and if there is ringing in your right ear, someone is praising you.

So, if the right side is the ‘good’ side, then why is it that people wear the ring on their left hand when they get married? Perhaps they know that the good days are behind them! Just kidding.