The messages started flowing in on a Sunday afternoon in May. The WhatsApp group for Indians stranded in Mexico had been a mix of hope, despair and anger for weeks. Now, it was full of excited, giddy messages – Did you receive an email from the embassy? There is a flight tomorrow from Mexico City to Amsterdam, and then from Amsterdam to Mumbai! You have to respond to them by 7:15 today; don’t forget!

I was in the middle of lunch, which I had ordered from a new Indian restaurant I’d decided to try that day. After months of searching for good Indian food in Monterrey, I had been ecstatic to find it, but now, my first thought was, I wish I’d known I was leaving tomorrow; I would have ordered something Mexican. My second thought was just a haze of panic. My lesson plans were in no shape for my students to be able to work on their own, and also I hadn’t received any email yet from the Indian embassy. What if I wasn’t on their list?! And if I was on the list, what should I do with my five classes? 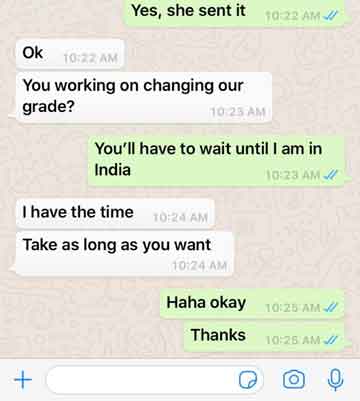 The next hour was spent in frantic phone calls to the Indian embassy, whose phone lines were jammed with calls for information and clarification. Once I managed to sort out the confusion and confirm that my name was on the list, I had only about 16 hours to get my entire apartment packed up. I knew I should focus on that first… but as I rushed around pulling clothes off hangers and shooting off text messages to the school principal and several colleagues, I couldn’t concentrate at all.

I was, of course, extremely relieved to be getting out of Mexico. I had been afraid for months that I would get stuck there, even nursing some dark fears that I would lose my new teaching job in Mumbai if I didn’t make it back in time. Having access to a repatriation flight when so many were stranded all over the world was a wonderful gift, but I was caught completely off guard by the short notice. Trying to pack up two years’ worth of clothes in one night wasn’t the biggest source of stress – it was my lesson plans for the final two weeks of school. It was the remediation week, and I had a handful of students at risk of failing English – how would they manage the work without me? I was hoping that I would be able to get back in contact and teach again once I began my institutional quarantine in Mumbai, but what if something happened; what if I couldn’t connect to the WiFi from my hotel room?

Realizing that I wouldn’t be able to concentrate if I didn’t figure this out first I abandoned my attempts at packing and spent the next three hours planning lessons for two weeks, sending emails to parents and colleagues about what students should do during class time, and making screencast videos to explain the tasks I had assigned. I even shared my WhatsApp number with each of my 124 students and their parents, something I usually avoid doing – but I was worried about what would happen if I ended up with a connectivity issue and WhatsApp was my only means of communication.

As soon as I sent off the emails, I was instantly flooded with emails and text messages from 6th graders and their parents wishing me well, telling me they would miss me, and even reminding me not to get coronavirus on the flight. A few of them did not bother with niceties, however, and were far more concerned about their grades than my travels – how would I grade them if I was leaving? When would I update the gradebook? What about handing the assignments in; where would they do that? And what if they had a question?

I answered their messages all evening while I opened drawers, made piles of things to discard, and threw things into suitcases. In the end, I managed to get everything done – just barely. After working all night, I ran out of time to finish the kitchen and empty the fridge, so I asked a friend to come over and take care of that and left.

Over the next few days and weeks, I would continually find myself juggling my unprecedented situation with my responsibilities as a teacher. When students got confused about a Google Meet which had been cancelled (Ms. Jindal, why aren’t you here, we are all waiting), I WhatsApped them a reminder that I had cancelled my classes for the week while I stood in line to check in for a flight. When a girl sent me a picture of a question she couldn’t understand, I responded in a voice note as I waited for the flight to take off. There were other things to worry about, of course – forms to fill out, overweight baggage fees, getting three extremely heavy suitcases across an airport which had no luggage trolleys available – but all of that played out against the backdrop of classes, assessments, and last-minute updates to the gradebook. 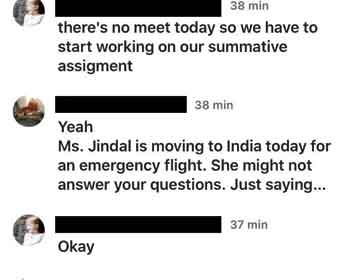 When I finally reached my hotel room in Mumbai 30 hours later, I gave myself a day to recuperate before I resumed teaching. My classes for the final days of school took place during my hotel quarantine from 7:30 pm – 1:00 am. During my first class back, my students greeted me with excitement, asked me if I was feeling like I had coronavirus, and demanded to see the view out of my hotel room window because they “wanted to look at India.” Unfortunately, since it was pitch dark outside, there was nothing to see. They had to content themselves with a picture of the view from my window and a virtual room tour.

The last few days of the quarantine was the only time when the stress truly began to get to me. First, my COVID-19 test results were delayed, which also delayed the length of the institutional quarantine from seven days to nine. Then, Cyclone Nisarga hit Mumbai at the worst possible moment, causing my flight to Bangalore to be cancelled. I was texting people on WhatsApp about flights while also trying to teach classes, and my students picked up on my distraction, with one girl gleefully catching me in the act and saying, “Ms. Jindal, are you texting someone on your phone right now? You shouldn’t have a phone in the middle of class!”

I even got stuck with Indigo Airlines’ customer care for 40 minutes trying to get a refund for my expensive flight while my students listened to the automated music with amusement and fascination, which played in the background as I took attendance and gave instructions.

When my final lessons drew to a close, I was profoundly relieved at the arrival of summer break, though mine was going to be a very short one this year. Still, even though I was ecstatic to be home, and to not have to teach at such strange hours, there was also sorrow about the way the year had ended. I couldn’t believe I had said goodbye to students and colleagues who I would probably never see again, over Google Meets! The year felt unfinished in a way that most school years do not, and I could tell that my students felt it too.

At the same time, I have many fond memories to carry with me – a YouTube video bidding me farewell made by my colleagues when they realized that I couldn’t attend the Farewell Zoom meeting, the outpouring of emails from students and parents wishing me well and saying goodbye, and the Flipgrid videos my Mexican students made with advice for my future students in India.

When all is said and done, the one thing that this experience has taught me is that despite how much the day-to-day of teaching may have changed, our jobs remain the same. It’s not the same as it is face to face, but with constant communication, it is possible to do this effectively and well, even if you’re in the middle of an airport, puzzling over a child’s grammatically horrific WhatsApp message, or trying to figure out the latest iteration of the e-pass on the Seva Sindhu while reminding your students about the importance of punctuation in the Google Meet that’s open on a separate tab.

The author is a writer and English teacher with eight years of experience working with middle and high school students. She currently works at Edubridge International School in Mumbai. She can be reached at [email protected].