For me, the word “teach” means to guide those in need of guidance. Knowledge comes in many forms. Most parents hope that their children will land “good” jobs once they pass all exams in their educational journey. In my 40 years of teaching experience, I have interacted with plenty of students. The sorry state of children today is that they are groomed for the rat race even before they get a chance to learn reflectively and develop themselves. Many children are able to manage the rat race and the competition and the stress that comes with it, while others struggle and are unable to strike a balance. My experience has told me that the following are the reasons for this:
• Unidentified learning disabilities
• No support or backing from parents
• Parents overlook problems faced by the child
• Peer pressure and neglect from peers and social groups
• Inability to cope with the stress associated with competition

I want to share an example of one such girl, who struggled during her school years, and she faced all the above listed situations. In 2001, I started coaching a batch of four six-year old girls. As time passed, I found that one of these girls, Neeta*, was behaving in an unusual manner. She was a slow learner and was unable to keep up with others in her batch. I dedicated more time to her. She was also an introvert and would not interact much with the others. Sometimes, the others in her batch would make fun of her, which I would strongly discourage. Interestingly, this mockery did not bother her and she would try to do all the assigned homework meticulously. But finally, when it came to performance in the exams, her report card would show poor grades. I always admired her qualities of orderliness, discipline and organization in everything she did. She maintained her books and was punctual with her work. 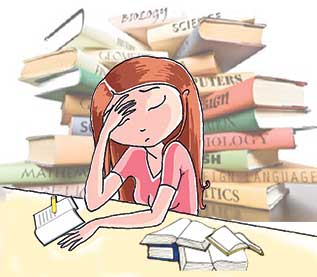 Over the years, I kept encouraging her, and year after year she passed without failing. In grade 10, she got first class. It was here that she faced the maximum pressure from her parents. They wanted her to take up science and engineering. This was despite her having scored only 40 per cent in the science in the board exams. She disliked science, and I, who had seen her studying all these years, knew she struggled with science more than with any other subject. She enjoyed math and performed well in it too. After a lot of conversations and struggle, Neeta’s parents finally agreed that she could do commerce in junior college. In grade 12, she passed with distinction. Again, at this point, her parents insisted that she go for Chartered Accountancy (CA). They spent lakhs for her CA coaching classes, despite her insisting on not wanting to do CA. After some time, they dropped that idea too and let her complete her B.Com peacefully which she graduated with a first class.

Today, she is 22, and has been selected by a reputed private bank where she will be undergoing training for three months, after which she will be absorbed in the same bank for a full-time job. She has successfully got a foothold in a career that she likes, and one which she felt suited her. She has become confident and vocal. Her parents too have now realized the potential of their child and are proud of the field in which she has excelled.

I now look back and think of all the tough times she faced owing to societal, parental and peer pressure and how she battled them all to emerge victorious. After seeing this transformation in her, I voice out my opinion to parents even more assertively now-a-days, advising them to let their child pursue their fields of interest.

The author majored in psychology and did B.Ed from Chennai. After teaching in schools for 4 years, she took up home tutoring and has been doing this for the last 36 years. She can be reached at revathim1958@gmail.com.