The diplomatic sail of Model United Nations (MUN) conferences in schools began in the 1920s and reached India in 1996 when The Cathedral and John Connon School organized their very own MUN in Mumbai. Since then this stimulating debating adventure has flagged prestigious platforms. With a participation strength of 3000 students, Indian International Model United Nations (IIMUN) is Asia’s largest MUN conference and will host its 2016 chapter at New York, the location for the United Nations headquarters. Harvard Model United Nations – India (HMUN) that organized its first Model League of Nations in 1927 and its first Model United Nations in 1953 showcased its Indian dais in 2011. Besides the forerunners, many schools of repute in the country are also converting their enterprising young leaders into in-house MUN chairs and organizers. Trends and statistics beckon compelling questions – What is this maze called MUN? What are the rewards for its myriad mazerunners? 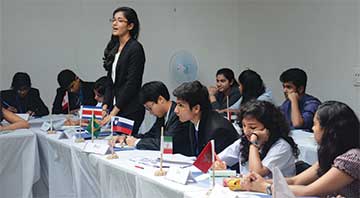 Part of the UN educational initiative called Global Classrooms aimed at bridging the gap between classroom learning and real life global-political issues, Model United Nations is an authentic simulation of various UN committees wherein students role play as delegates from different countries and debate over specific and current political conflict or humanitarian issues, to eventually arrive at and pass concrete draft resolutions. For example, one of the committees at CMUN 2015 was the Social, Cultural and Humanitarian Committee (SOCHUM), which debated on the selected agenda of Corporate Human Rights Agendas in order to uphold the UN Guiding Principles on Business and Human Rights approved in 2011. To accelerate the dynamism of the committees, the Chairs plan specific crisis – breaking news about the death of migrant Sri Lankan workers in a factory explosion in Belgium would be an example – and thereby compel the participating delegates to think on their feet for news analysis and configure possible solutions.

From research about country’s demographics and foreign currencies to MUN procedures, from strategies for alliance formation to structuring position papers and draft resolutions… one can never be too prepared for a MUN. Schools have not only recognized this need but are also creating a sub-culture of debating and MUNing through on-campus MUN Clubs and exclusive training sessions. Ms. Michelle Rego, Facilitator, History and Global Perspectives, Aditya Birla World Academy (ABWA), Mumbai informs, “When we first started, it was the teachers who would provide the training. Now I am proud to say that every year, I have my Senior MUN club students who prepare the students for a month before a local/national/international MUN. The teacher has to pass on the responsibility to the students and begin to act more as a guide and a mentor.” Ms. Rego has been running the MUN Club and in-house MUN conference for the past few years and has been the Faculty Advisor for several international MUNs.

If participating in a MUN is a desirable opportunity, organizing one promises unparalleled pride and privilege for the student community. Jash Vatsaraj, currently pursuing a Bachelor of Financial Markets had the experience of chairing the Food and Agriculture Organization committee at IIMUN 2015 held at Indore. Sharing his experience, he explains, “It is very tricky to prepare as a chairperson, as you must be well versed with the agenda and any loopholes and any scope of discussion. It was an intense few days, and the organizing was coordinating efficiently and constantly with the Executive Board. Also, managing the expectations of the Secretary General, and the committee itself was challenging but an invaluable learning experience.” Vatsraj who had also donned the role of President for the International Youth Conference 2014 organized by Jamnabai Narsee International School, Mumbai, claims that that experience moulded him into the leader figure he is today. The MUN student organization team has its own complex structure with clearly defined positions and chalked out roles and responsibilities. These comprise the Secretary General, the Chairs, Executive Board, Press and Marketing Team, Logistics and Technical Team, Finance and Accounting Team as well as an Arts and Design team. While being a delegate or Chair for a MUN committee, one is required to have a sharp academic grounding in subjects like History, Politics and Economics; the Organizing Committee of a MUN is more inclusive in its ensemble of talents and specialized skills. Schools should realize this key difference and create this vista of backstage management for its students.

What is exciting for a teacher is the scope to design teaching strategies and build a classroom atmosphere, which can act as pseudo-training for cultivating fundamental skills like critical thinking, perceptive analysis of data and information and persuasive oral and written communication, essential for successful MUNners. When asked which academic subject allowed him to transfer the skills acquired in the classroom into the MUN committee rooms, Yash Upadhaya said, “Primarily, subjects like history, political science and economics are of a major help. If we talk about high school MUNs, one can clearly see the difference between delegates who have studied a particular topic as part of their curriculum and those who haven’t. This is especially observed in economic committees. This is also a major reason why many delegates shy away from committees like ECOSOC or rather ECOFIN.

Teachers that promote research work, drafting, and public speaking end up holding the most productive classroom experiences as far as MUNs are concerned.” In addition to subject knowledge, MUNners also need to be adept at structuring and writing draft resolutions that are aptly and persuasively worded. Structuring and writing skills from the language lessons are fruitfully employed in this respect.

Contemporary leaders and visionaries like Dr. Rajendra Pachauri, Chairperson for Nobel peace Prize winning IPCC, actor and social activist Nandita Das and RBI Governor Raghuram Rajan have graced the MUN opening ceremonies as keynote speakers. Increasingly held at 3-star and 5-star hotels, these MUN conferences are beginning to mirror corporate meets and conferences and metamorphosing into ripe grounds for intellectual discussion and healthy inter-cultural exchange for students from across states and countries share the dais and evening social gatherings. Having said that, it might be a worthwhile question to consider that in a highly competitive school environment, do niche and exclusive competitions like MUNs create a further schism between achievers and non-achievers? For, the amalgamation of public speaking, debate, research and strong written communication can be a tall order to achieve. Ms. Marianne Hamon, Secondary School French teacher at Oberoi International School, Mumbai opines, “I do not think that MUN creates such a schism. I actually often noticed that the students who chose to participate in a MUN conference were not necessarily the obvious academic achievers.” Ms. Hamon who has been the Faculty Advisor for Mercedes Benz MUN and Singapore International School MUN further adds, “For example, a student who might not be normally very thorough in the research of a topic but who is a comfortable public speaker, seems to strive to acquire more knowledge and content in the preparation phase, in order to be able to showcase his/her public speaking skills in his/her MUN committee.” What is also important to acknowledge is that MUNs may not be the definitive fit for all good public speakers for it requires a genuine interest in world politics and current events. Mrs. Nisha Manilal, parent of a Grade XI IBDP student shares her perspective, “My child is a strong public speaker and has taken elocution classes throughout her childhood and enjoys arguing and making her point. However, certain events don’t suit all people despite them displaying the qualities for it. She had taken part in MUN a year or two ago, where she felt confident at first when giving opening speeches and conversing amongst peers and fellow delegates. But, slowly as hours passed, she wasn’t too happy and comfortable despite her leadership and public speaking qualities.”

The periphery and potential of MUNs also expand to reach the home environment as well. For MUNs cannot be a one-time event but rather an inculcated attitude and an induced culture. Dr. Usha Balakrishnan, Historian and Arts Consultant who actively supported her son’s participation in international MUNs advises, “Parents can provide encouragement, support, research inputs and above all engage in discussions and debates with their own child to hone these skills. Parents should recognize and acknowledge that their children are intelligent intellectual beings – and therefore conversations at home should encompass world issues, politics, and social sciences. Encouraging your child to read the newspaper every day and watch national and international news on the television will go a long way in preparing them for such competitions.”

One can clearly discern that its complex structure and intricate fabric of functions can make MUNs an extremely exclusive affair. This is seen by the fact that a large majority of students very often do not speak a single word in their committee sessions at their first MUN. For, that is the amount of time and observation one might require before the MUN mystery is completely unravelled in your head. More MUN experience alone breeds more confidence. Schools tend to have a high priority on their candidates winning the trophies and special mentions at these events and thereby are likely to choose the more experienced students for key MUNs. This increases the probability of an exclusive league of MUNners who give a repeat performance and climb up the MUN hierarchy while many others stay as delegates or non-participants altogether. Like myriad other school level competitions, MUNs also have the potential to not only create distinct categories of participants and non-participants but also pronounce the difference between leaders and non-leaders.

It is paramount to understand that MUN is not a one-time event but a continuously living and evolving culture. Adopting it is a conscious decision and an enormous commitment…for students, parents, teachers, and schools alike.

The author has been engaged with the IGCSE and IBDP curriculum as an English Literature facilitator for seven years and also loves writing on educational issues. She can be reached at ps.solus16@gmail.com.