There are a number of leaders of education who have left a deep impression on me. This is my opportunity to analyze what they did that impressed me.

One of the first, is Kabir Jaithirtha of Centre For Learning (CFL), Bangalore. Kabir passed away on September 18, 2018. He lives on in the hearts and minds of all his students, colleagues and us fellow travellers. Truly a free human, thanks to his interest in Jiddu Krishnamurti’s questioning of all things that people take for granted, Kabir lived a life unfettered by the need to compromise and fall in line. He bravely explored the meaning of life with his students, delving into the conversation with questions that had no answers but led to further questions. He engaged students in their own learning, and in his own unique way, developed what today we call 21st century learning – critical thinking, research, debate and discussion along with compassion, silence and reflection.

Some people would remember that the much sought after CFL was started on the terrace of a building in August 1990 by a group of educators including Kabir. They believed a smaller school would be more amenable to “explore the nature of learning and its relationship to challenges facing all of us today”. Thereafter, the school moved to an ashram on the outskirts of Bangalore and finally to a farmland, quite a distance from the city. The school is a community of adults, youth and children, learning together. This attitude to knowledge is reflected in its use of the city’s facilities, the environment and a host of resource persons who contribute willingly to extending the boundaries of knowledge of all the members of CFL.

Pedagogically, the school is structured to facilitate the curriculum that the teachers have decided is important – one in which the students carry out activities that require “exploration and investigation”. When I visited it in the 90s, CFL was fast gaining a formidable reputation. In the happy, buzzing space, interspersed with many moments of reflection, school ‘work’ included explorations of the students’ relationship with themselves, their family, society and their feelings. In Kabir’s classes, mathematics was presented as a way of looking at the world which the student could creatively comprehend or make sense of by actively discussing and dissecting it. The mathematical ‘problem’ was real, not numerical. In the class I attended, the language of mathematics became an enquiry that deepened thinking about constructs.

I attended Kabir’s mathematics class. He sat on the floor mat surrounded by students who, as it so happened, were mostly girls, aged 11 to 13, animatedly discussing a problem in three-dimensional measurement. The students suggested different ways of looking at the three-dimensional figure. Kabir would accept the suggestions and discuss them further. Often, it would appear as if the students had forgotten his presence as they mulled over the different possibilities. At no point did he give the feeling that he did not know the solution or even the best way to approach the solution – but it was apparent that he would not hand it over on a platter. He often agreed with a question that a student asked, saying, ‘Yes, we have to look at that. How do we find that out?’ The feeling in the class was one of interest, thoughtfulness, at times excitement and at all times keen attentiveness. The enquiry was shared, the solving of it a collaborative process in which the student and the teacher thought together and Kabir was content to let the student arrive at the solution by using their own thought processes, making mistakes, going along blind alleys and retracing their footsteps. Later he told me that their math ability was far beyond that of students of the same age, in other schools where he had taught. To me it was evident that their ability was a result of the way he enabled them to think.

Unlike the regimented life that most schools offer, Kabir and other founders decided that students have to be provided with unstructured time. They believed students must have the opportunity to decide for themselves how to utilize their time. Further, students were expected to discuss, lay down and question the validity of school rules themselves. For instance, while travelling from their homes to the school in the school van, the students determined a rule for themselves (and any teacher or visitor in the bus) – that there would be absolute silence while passing a large pond that had migratory birds. The students would voluntarily cease their conversation and get a good look at the birds everyday. I discovered this rule because I was politely asked to “be quiet” by the students themselves, who, later, kindly explained why! This “law”, I understood, would be maintained as long as it was meaningful to the students and die out when the attention to the birds was no longer of any meaning to them. This ability to make rules work for their own benefit is what is ‘learned’ by the students. It is a discipline that emerges from the students’ own desire to engage, and is supported by attentive teachers like Kabir. 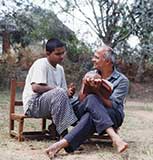 Parents too are invited into the dialoguing and exploration. As Usha points out, “We make it clear that you can’t just give us your children and forget about them – we all have to work together”. CFL made a conscious decision to admit children whose parents desire an alternative education for their children, one that did not work through pressure and grades but through recognizing and supporting the innate curiosity of the student. The child and adult in the school space were partners in the process of teaching and learning. This decision gave the school an identity and a clear direction for operational functioning.

Kabir, Usha, Venu, Viju, Yasmin, Richard, Kamala, and Vandana, as the founders, created CFL as a space where no one needed to be designated as a leader. In Kabir’s words, “There are certain functional skills people have and the work gets allocated according to these functional skills. Venu, for example, is good at accounting and finance and so on, so very naturally he takes on much of the burden of finance of the school. Richard is good with his hands, so much of the building activities go to him. Usha, by common consent, has been found very good at co-ordinating, working out details, and ensuring the overall direction. Often without being told, or specifying, she would be found doing that activity. So each of us to some extent, takes on certain roles which we are suited for, and work that comes up is allocated during the meetings. The meetings are open-ended, and there is enough time for people to express their opinions, explore alternatives, raise questions that they might have in their minds and even chitchat; spend a little time joking about things. Differences are put across as questions. An individual at any particular point in time may be biased, may be prejudiced or may have a certain fixed viewpoint. When you speak in the group however, there may be people distanced from the problem, who may be able to raise other facets of the problem and in the process we come upon a solution that addresses the real problem rather than my idea of what the problem is. Everyone may not talk the same amount, but sometimes one sentence from a particular person, may be more effective than ten sentences from me. We find out how to dialogue with each other, how to work with disagreements and how to find a solution.”

We talk about schools being the heart of the community. Kabir contributed to the creation of a culture of learning and discovery that has outlived him. Few people are as lucky.

The author is the Founder Director of Adhyayan, an organization that supports school leaders and owners to systemically improve the learning experience of their students (see www.adhyayan.asia and www.adhyayanfoundation.org). She can be reached at [email protected].