What prevents us from wanting to excel in sports?

“I’ve missed more than 9000 shots in my career. I’ve lost almost 300 games. 26 times, I’ve been trusted to take the game winning shot and missed. I’ve failed over and over and over again in my life. And that is why I succeed.” – Michael Jordan

The quote above from one of the greatest basketball players there has ever been, exemplifies how sport is such a great analogy for life. It tells us how every small and big failure in our lives is a stepping stone to something greater and critical for success. Any professionally successful athlete will tell us that there is no shortcut to success in sport, like in life and perhaps will also tell us how winning is not everything and even where it is, it takes a whole lot of practice, preparation and perseverance before one gets there. Nothing could be a greater analogy to life than the pursuit of sports, which imparts some of the greatest life lessons that there are to learn. Lessons of belief, effort, and perseverance, all of which make us who we are. It is a pity therefore that despite such an overwhelming need and scope for contribution of sport to the psychological and physical development of a child, which impacts everything else including learning outcomes in the classrooms, and helping in the conceptualisation of self, sport finds such less emphasis in the school curriculum that is followed in our classrooms. Even when it does, the mention is cosmetic and doesn’t really provide any incentive to the learner to want to excel, like there is for other academic subjects.

Perplexed and disillusioned by this reality, and the reluctance of the majority of schools to integrate physical education and sport into the main focus area of the curriculum, I set out to find why such reluctance exists in the first place. I interviewed some school leaders, teachers and physical educators across different kinds of schools and found a gamut of different responses and approaches to, what should be the role of sport in a student’s life? Also of interest to me were their views on what are the possible hurdles to integrating a broad based sports curriculum to the main curriculum. My significant question therefore was that despite such overwhelming research based evidence on how a healthy presence of sports in the school curriculum is beneficial to children not just in terms of physical and emotional growth but also cognitive development, why is it that the majority of our schools choose to ignore them?

Almost all of my interviewees were from English medium schools concentrated in the urban areas, so the following points should be viewed in the light of that fact, though the situation in smaller towns and villages may not be very different, if not worse in certain contexts. Some of the school leaders from the English medium schools, mostly private, that were catering to children from the lower classes to the lower middle classes told me that the school infrastructure they have doesn’t support sporting facilities. Most of them do not have a playground attached to the school and many among them do not have an annual sports day. Some of those schools which had an annual sports day had to transport the students to a playground far away from the school’s physical location that needed spending on logistics and coordination, not just for the annual day but also for rehearsals and qualifying events. The overwhelming majority of them did not have a dedicated physical educator, while most of them had a subject teacher doubling up as sport instructor when they could squeeze out enough time for such pursuits.

When I asked them why they ignore such an obvious choice of investing time, money and infrastructural planning into having some sports time and facilities for their students, the majority of them said that they have limited resources – both infrastructural and financial. And since sports or physical education is not seen by parents as a priority area, those with limited resources would prioritise academics for their children over schools that has a healthy balance of sports and academics. Such a conception is part of a much larger discourse and understanding of what is the real contribution of sports to a child’s mental and cognitive development. For a lot of these parents who cannot afford to send their children to more expensive elite schools, they look at physical education and sports as a luxury, as something that doesn’t affect academic or learning outcomes and possible future career outcomes.

One of the physical educators that I interviewed from a reasonably well established school in Kolkata, told me that he doesn’t really have the same recognition among other subjects and class teachers, by virtue of a discourse that looks at physical education as a luxury or a wasteful exercise that doesn’t add any value to the child’s mental development and doesn’t impact future career prospects. He also told me that children were reluctant to take part in activities under the sun and preferred the comfortable environment of the classroom. He would frequently hear requests for some indoor games from the children who would consider them to be more fun filled and exciting than physical drills, running around or playing team games, especially under the hot sun in the playground. This seemed quite surprising from my school days where we loved to go out in the sun and play football, kabaddi and other games that allowed us some relief from sitting in the classrooms and listening to lectures.

One school leader from an elite private school in Bangalore, which advertises its infrastructural facilities for sports, told me that a lot of the affluent parents who are able to afford such schools are attracted by expensive sporting facilities like golf courses, swimming pools and horse riding over more traditional sporting pursuits like football and athletics. For the school management, such facilities were important selling points to get affluent children, and not necessarily due to an awareness of the role sports play in building character and physical endurance of children in their formative years. I interviewed the physical instructor from the same school who rued the fact that children today are not as excited about team sports as they used to be in his generation. For those that are interested in sports, they were found to be more interested in individual sports over team sports, if at all, even though team sports, in his opinion, imparts values of teamwork, empathy and sportsmanship. He was also of the opinion that for the children and parents to take sports and outdoor games seriously, the curriculum needs to necessarily put adequate weightage and emphasis on such activities, like there is for other academic subjects. 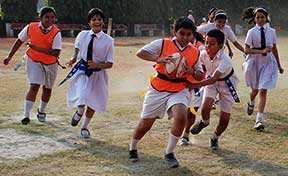 In an interview with a physical educator from a missionary school of repute in Mumbai, I was made to understand the reluctance with which children now have been found to approach outdoor games and sports. He regrets the fact that there has been a cultural shift in approaching outdoor sports. According to him there is a belief among some of the younger school going generation that outdoor sports, especially team events are not as much fun, as the penetration of virtual reality through video games, play stations and other gadgetry is found to be substituting the need for engaging in healthy physical competition that outdoor sports historically offered. It is also considered to be more convenient than playing under the sun and in the mud and getting bruises by the children today. He says, for things to change, there has to be a cultural shift in how parents and in turn children view sport, and that is what will create the demand for healthy outdoor competitions at the school, inter-school and district level.

Through my conversations with the multitude of physical educators, school leaders and educators, the overwhelming conclusion that I am invariably tempted to draw is that the hurdles to having a sports culture in our nation’s schools are two-fold, one which is about the hard facts of the absence of playgrounds, enough physical educators and other related staff, the other being softer realities that are concerned with how the desirability of playing sports or outdoor games is perceived by all the stakeholders.

I also realized from these interactions that until and unless the school curriculum categorically makes sports and physical education a focus area and something of paramount importance in the life and development of a child, schools will not be nudged or influenced to change their stance on the desirability of putting an emphasis on sports and physical education. Also for parents to take an active interest in their children pursuing some outdoor sporting enterprise, they need to see the curriculum incentivising sporting performance and accomplishments through marks or other ways of recognizing effort and accomplishment that is seen to be at par with academic achievement.

The primary need of the hour though also includes the school management counselling teachers, so that they can in turn counsel the parents and the children to understand how it is imperative to have a healthy balance of physical and mental pursuits throughout a child’s school life. It is only through inculcating a culture for physical fitness and sporting exuberance, at an elementary and primary level of schooling that we can improve the standard of fitness and sporting performance of our countrymen in the long run, especially improve our dismal shows at international events that have always perplexed policy makers who desire better sporting performance by our countrymen.

An exciting initiative, that aims to popularize sports at a school level, through the Marks for Sport Campaign by NDTV, can be accessed at http://www.ndtv.com/micro/marksforsports.

The author is an educator and freelance writer on education and holds an advanced PG diploma in Public Policy. He co-founded ‘Fill in the Blanks’, which aims to conduct workshops for teachers and students to supplement regular classroom interactions. He can be reached at [email protected].