“You can outdistance what is beside you but not what is within you”, (Rwandan proverb)

An intrapersonal conflict is within us. It demands recognition, acceptance and resolution. Each of these is interlinked for unless we recognize the existence of a conflict, resolution cannot happen.

A discussion at our learning centre once focused on the dwindling number of enrollments, and the reasons for an increasing number of students being rendered unsuccessful at the board exams. The reasons given by the staff for the latter ranged from de-motivated students, lack of support at home, to poor organization, poor handwriting and so on. While debating the most effective ways to tackle these, a member of the staff said that perhaps we were not doing enough to make the students exam ready. By this, she meant, that the school failed in its duty to ensure that the students memorized the answers, were able to reproduce them when asked and that the time devoted to other activities in the daily schedule , could be better utilized by ‘drilling’ the students for the exams. Examples of other learning centres and schools were cited, where drilling the students continuously for 6 to 8 hours, ensured not just passing, but in many cases, good marks; she also mentioned that all parents primarily want their children to pass exams. Perhaps fewer students approached us for admission because we did not ‘guarantee’ success in the board examinations was another opinion shared.

These opinions were greeted with mixed reactions with most agreeing. Initially taken aback, those of us who disagreed found ourselves on the defensive, trying to explain that success in exams was no guarantee to success in life. The statement however sounded hollow as if it was said without conviction.

The meeting and the debate dominated my thoughts for I had realized earlier, though not admitted openly, that parents looked forward to a tangible achievement from their children, and success in examinations was a tangible one. We often explained to parents when they approached us for admissions that, as a centre catering to children with special educational needs, the NIOS was just one of the options at school. What mattered more, we emphasized, was all round development which would happen when the students participated in all the extra and co-curricular activities we offered. The parents wholeheartedly endorsed our approach to education and were initially happy as many positive changes were visible in their children: less anger, more independence, better social communication, progress in the 3 Rs, to name a few. But their aspirations and ideas about the future of their children changed over the years and all parents wanted their children to pass the NIOS, urging us to recommend a scribe in case their child was repeatedly unsuccessful. Despite our stress on and adherence to the idea that learning needs, in fact demands understanding and can take place in all situations and activities, in and outside the classroom, parents were urging us to devote more time to academics especially when their children registered for the NIOS examinations. Even ardent supporters of our educational philosophy, experienced a subtle shift in their thinking about education, when their child was around 15/16 years old and the pressure to study, attend tuitions etc began. 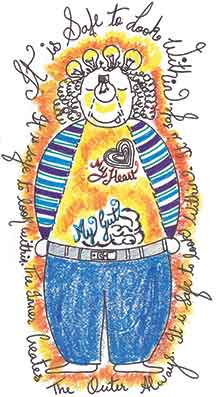 The chasm between our own ideas of education and parental expectation was an intrapersonal conflict that needed to be resolved. Personally, I felt that the very essence of the school was being challenged. A major question that arose was: As the Head of the institution, was it not my duty and moral obligation to cherish the values intrinsic to us? But to counter this, there was also the matter of collective responsibility, of the institution towards its stakeholders, in this case the students and the parents. The question then arose, should we abandon our ideas to satisfy parental desires or continue to stand firm by our beliefs and instruct the parents to look elsewhere if all they were interested in was the X Std certificate? If the parents did look elsewhere, how would the institution continue to function?

The parents perhaps also experienced a conflict in this situation. Should the possibilities of a better life in the future be overlooked for a recognizable achievement today? Who makes a judgment about the better prospect and how is such a judgment to be made? Parents also have the unenviable task of trying to make an objective decision about their child, always a difficult proposition.

What of the student, torn between the school and the parent, experiencing guilt at the possibility of having to lie about attending tuitions? How does an adolescent attempt to reconcile the difference in the approach? Was he/she foolish to miss out on the field trip or camp, by feigning an illness because such activities in the IX or X were a waste of time?

It would be dangerous to dismiss these questions arising in the minds of what can be termed partners in the education process as mere rhetoric. To do that would be to run the risk of changing an intrapersonal conflict into an inter-personal one for quite often, conflicts involve various parties in the organization (parents, students, management and staff in an educational setting) and these can be best addressed by making the effort to resolve the conflict within each one of those mentioned before attempting to resolve the conflict involving two or more parties.

In fact, at our centre, signs of the interpersonal conflict were slowly evident. Discussions with parents on what was right, turned into debates and sometimes into arguments. More and more, we found ourselves defending our policies. Signs of a communication gap were increasingly visible. We decided that we could not continue to evade the issue and in order to remedy the situation, we:

These were just some of the steps we took to avoid the degeneration of our mutual relationship. We needed to recognize that we could be wrong and that as professionals, we did not have all the answers. It was also necessary for the parents to remember that their child would be better enabled to reach his/her true potential if they partnered with us. The student was definitely benefited as there were fewer conflicting messages from school/home.

This may not be the only or even the best method of resolving a conflict. In an ideal situation, conflicts, intra or interpersonal, may not even arise. However, that would be a pity for conflicts are necessary as they play an important role in helping individuals and institutions evolve. When we begin to question ourselves, question each other or the organizations we work for, we are setting in motion a process of, hopefully positive change. To that end, it is imperative that we introspect and effectively communicate in order to recognize, accept, diffuse and resolve conflicts in case we are unable to avert them. Then perhaps, we may be able to outdistance what is within us as well.

The author is Head, Little Angels’ Sapling, a centre for alternative education in Sion, Mumbai. She can be reached at jaya_ranga@yahoo.com.

The disruptive child
Breaking it right
Barriers within build barriers without
Identify, listen and empathise
Responding to conflict