I have been working in Dantewada, Chhattisgarh, for about two years now and my colleagues and I have observed a kind of pattern in students’ absenteeism and them dropping out from school. One reason is that the students themselves are not interested in attending school. Obviously, we can’t blame the students alone for this disinterest; schools are responsible for creating this disinterest in them. Another reason is that parents don’t want to send their children to school because they don’t find any relevance of education in their lives. So, instead of sending their children to schools parents get them to help in daily chores such as collecting timber, seasonal fruits and vegetables from the forest and selling them in the market or doing other activities to earn a livelihood.

I would like to narrate here three instances of child absenteeism and related issues I was personally involved in. My experiences made me realize how helpless and defeated you can feel in such cases. Despite my best efforts I was unable to help the children involved. 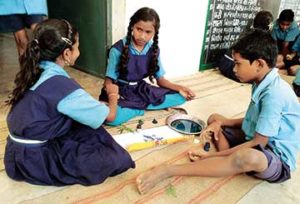 Pramesh studied in class 6 in one of the schools I work with. He hadn’t been coming to school for a long time. Teachers from the school made several visits to his house to find out why. It was only after threatening his mother that she won’t get her monthly ration if she didn’t send her son to school that Pramesh resumed coming to school. I found him to be very active and involved in classroom tasks. I was, therefore, keen to find out the reason for his absenteeism.

With this purpose I talked to him and learnt that he had to go to graze his cow and that’s why he was not able to attend school. His father had expired. So if Pramesh was coming to school now, I asked him who was grazing the cow. He said that duty was taken over by his younger brother who had now stopped coming to school. This was a problem that needed an innovative solution. I suggested that Pramesh could come to school three days in a week and his younger brother the other three days. Pramesh agreed to what seemed like an ideal solution to this peculiar problem. However, when I was discussing Pramesh’s problem with his teachers, they asked me, “Madam would it be alright if we ate food for three days and remained hungry for rest of the days?”

I, however, was of the opinion that this way both Pramesh and his brother could attend school three times a week; learning something was better than not learning at all. But the school refused to accept this solution and with Pramesh regularly missing school, they cut his name from the school. I felt bad that I couldn’t do anything. 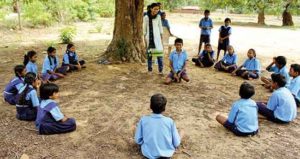 Another case is that of Rannu – a boy who studied in a school I work with. Rannu is the eldest in his family. Last year when he was in the 8th standard his father expired. After that he used to come to school only occasionally. Somehow he passed the 8th standard and went on to the 9th. But recently when I met him and asked if he was attending school he told me that due to family responsibilities he stopped going to school. Now he is involved in agricultural activities.

A third case is that of Mangal. Mangal had been absent from school for many days. The headmaster of that school told me that Mangal’s mother married someone else leaving him and his two younger brothers alone. Now, he lives with his grandfather who is always drunk and takes no responsibility of his grandsons. When I went to meet him I saw him riding a bicycle with his youngest brother in tow. He told me he was going back home after dropping his other brother to school. When I asked him why he wasn’t coming to school, he told me a strange and unbelievable story. According to his story whenever he tried to go to school he was possessed by a goddess who took control of his body and demanded money and after a hysterical few minutes of this Mangal would faint. Either Mangal had a psychological disorder or he made the story up to avoid being nagged about coming to school as he knew that it was practically impossible for him to attend school leaving his youngest brother behind.

All these experiences that I have shared have many things in common – all students have single parents, all of them want to study but unfortunate situations have forced them to stop going to school, and finally all of them are ensuring that their younger brothers are able to attend school at the cost of their own education. In the case of both Pramesh and Rannu maybe if their mothers knew the value of education, there was still a possibility of their being in school.

The reason I deeply felt about this is that there must be many more students like Pramesh, Mangal and Rannu in similar kinds of situations. How can we resolve such issues? Can our schools accommodate these students in a way that they are able to fulfill their responsibilities too?

The author is working with Bachpan Banao organization in Dantewada, Chhattisgarh. She has done her MA in Education from Azim Premji University. She is passionate about working with children especially in the interior areas. She can be reached at snaazknp@gmail.com..