I have a special affinity for quiet, open spaces abundant with trees, therefore it was difficult to keep myself from visiting Santiniketan when I was in Kolkata this December. It sounded so dreamy and magical from what I had heard that I wanted to see it for myself. ‘Santi’ means ‘peace’, and ‘niketan’ means ‘abode’, so the name literally stands for ‘abode of peace’. To be honest, I could feel that peaceful vibe inside and around me when I visited.

The train ride from Howrah station in Kolkata to Bolpur station in Birbhum took roughly three hours, and I found myself happily breathing in the idyllic air of Santiniketan, a legendary institution devoted to the visual and performing arts, and an education that aims to nourish the spirit as much as the intellect and the physique. The other presence that was quite prominent was that of Nobel laureate Rabindranath Tagore who expanded the place into its present avatar as a university town though his father Debendranath was the one who laid its foundations.

It is embarrassing to confess that I studied literature in college and at university but did not explore the work of Tagore in depth. I could say that my courses did not require me to read much of him but that is just an unimaginative excuse. Being at Santiniketan helped me develop a profound appreciation for his many talents as poet, educator, philosopher, novelist, musician, and advocate of cross-cultural dialogue. I wonder he managed to keep up his prolific creative output because his life was full of suffering. His mother died when he was a child. His wife, children, father, and sister-in-law also died within his lifetime. 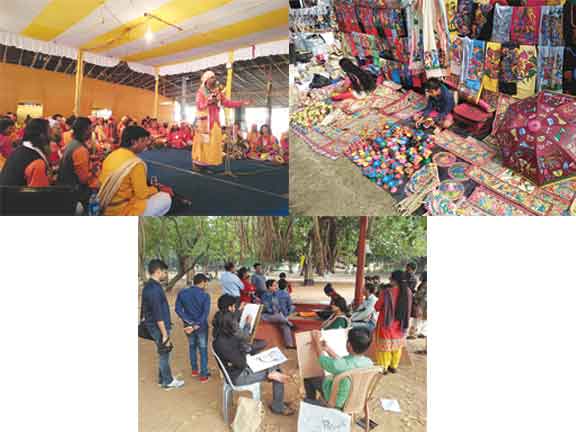 I reached Santiniketan with minimal planning. I put my most essential things into a bag, and set off, hoping that everything would work out just fine. A friend’s friend who studies at Kala Bhavana, the fine arts institute at Santiniketan, offered to host me in his hostel room. This lovely soul, whom I had never met, was travelling over the weekend but spoke to his roommate and other friends about my arrival so that I would be comfortable. It was a pleasure getting to know them over meals and long conversations that stretched late into the night. On the flip side, the walls of Kala Bhavana were adorned with the murals of so many great artists who have studied and taught at Santiniketan but hardly any effort was being made to preserve them. It was heartbreaking to see them covered with cobwebs, moss and mould.

I used to wake up early to enjoy the fresh air and chirping of birds, and walk around the campus in search of a hot cup of tea and some breakfast. The environment was an absolute contrast to my life in Mumbai, where one wakes up to the noise of honking vehicles. It was thrilling to imagine what it would have been like to study at Patha Bhavana, the school Tagore started. I would have, undoubtedly, learnt how to climb trees, pick my own fruit, and establish a much closer bond with the earth.

My visit coincided with the Poush Mela, the annual arts and crafts fair at Santiniketan, which attracts visitors from all over Bengal and beyond. A variety of colourful stalls were set up in large grounds to accommodate the throngs of people streaming in to buy saris, dhotis, musical instruments, footwear, kitchen utensils, paintings, bags, idols, and so many other things. I bought a few hand-painted paperweights, a clay image of Tagore, and some delicious seasonal sweets that were too mouth-watering to resist.

What I loved most was the central performance space used by the Bauls to share their spell-binding devotional music and dance. They are the inheritors of an old mystical tradition that combines elements of Vaishnavism, Tantra, Sufi Islam and Buddhism. Tagore, it is said, was deeply influenced by them. One can run into the Bauls in West Bengal as well as in Bangladesh. Watching and listening to them live in action was quite different from streaming a YouTube video. I had gooseflesh, and my eyes misted over.

The author is an educator, writer and peacebuilder. He has an M.Phil. In English Language Education. He can be reached at chintan.backups@gmail.com. He tweets @chintan_connect.