Some 34 years ago I joined an undergraduate college as a lecturer in physics. Prior to that, I had worked in a science museum. At the beginning of my teaching career, I had one wish in my mind. I wanted my students to avoid learning by rote and inculcate a scientific temper. Looking back now it seems I was a little too ambitious.

At the science museum, part of my responsibility was to explain the working of the exhibits and the scientific principles behind those exhibits to the visitors. That probably cannot be called science teaching but it was certainly a form of science communication. Later when I joined formal teaching, I missed those visuals and exhibits because in the class, the mode was chalk and talk.

I have always believed that building models and doing experiments (demonstrations included) with one’s hands is important in a culture like ours where the products of pure intellectual exercise have traditionally been accorded a higher place than products of manual labour even when the labourer is a highly skilled artisan. This has worked as an impediment to the scientific and [especially] technological progress of our society.1 Besides, it is well-known that the hand-brain interaction plays a very important role in the evolution of the human brain.2 Even today a child, in its early years, learns mostly by physically interacting with real objects in its surroundings. The capacity for abstract thinking and reasoning comes much later.3 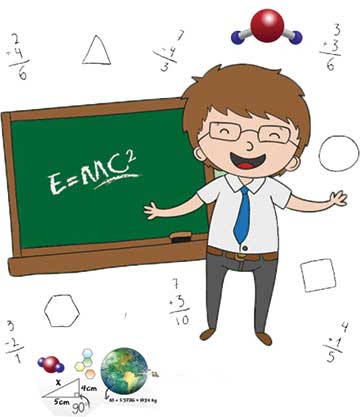 While such activities are encouraged to a certain extent at the school level, it all but disappears at the college level. Please remember that none of the high-voltage JEEs test anything other than theoretical abilities of the students. At the (general stream) undergraduate level of course, there are experiments to be done in the practical classes. But they are standardized and everyone is supposed to get the same result. That has been the case during our student life as well. This is qualitatively not different from learning by rote. But my experience in the science museum taught me that “experimentation” was much more fun and students themselves enjoyed open-ended experiments. Within the existing framework of formal education there was hardly any scope of open experimentation. The anxiety to complete the syllabus in time and prepare the students for the examination took priority. This was a dilemma I faced during my career as a teacher and I have still not been able to resolve it completely.

I would like to mention one more problem regarding laboratory classes that troubled us very much. Every year we used to encounter students who were inexplicably inept in handling even the simplest of instruments. I was shocked to discover (and this was verified over the years) that they came from (mostly suburban) schools which did not have any lab to speak of at the plus-two level. The pressure of sheer numbers seemed to have elevated these schools from class X to class XII levels! Even with additional assistance from the teachers, students found it difficult to cope. I suspect similar problems may exist in other parts of our country as well.

Another lacuna was the lack of demonstration experiments in formal teaching. It has been my experience that a section of high IQ physicists and physics teachers look down upon demonstration experiments. Unless something is measured, some of them say, it is not an experiment. One only has to recall Galileo’s dropping of balls from the tower of Pisa or its equivalent – the feather and coin experiment on the surface of the moon – to realize that a demonstration can also establish a fundamental principle.

Opportunity for that kind of ‘teaching through experiments’ had to be sought outside the institutions of formal education – sometimes in the science museums, sometimes on TV programs like Quest and Country Wide Classroom; at other times by participating in the activities of NGOs which popularize science. I will discuss a few of those activities in some detail below.

An opportunity presented itself in the form of a TV program “QUEST”. It was the first science quiz program televised nationwide in India. It was telecast on Doordarshan, once a month, for five years (1983-1988). I was one of the two hosts for about a year and a half of that tenure. QUEST became popular with the viewers and also won a UNESCO award.

Unlike the usual recall-from-memory type of quiz programmes, QUEST consisted of questions based on experiments done on the spot. Those questions tested the analytical ability and conceptual grasp of the participants, and not the power of memorizing. In most cases simple low-cost experiments were devised and participants as well as viewers were encouraged to do them. This hands-on experience was its hallmark.

Some questions asked the participants to perform a task physically. For example, in one case, they were asked to lift two cubes of ice with a piece of string without tying a knot. The trick is to press the cubes against each other with one end of the thread placed in between. Owing to ‘regelation’ the cubes will stick together when the pressure is released and can be lifted by pulling the string. 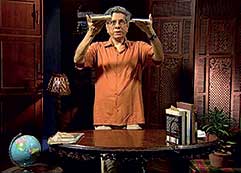 Simple experiments sometimes produced unexpected results and the understanding and eventual explanation often evolved with the participation of the viewers. This happened in the case of the following experiment:

If one bends (and partially breaks) a matchstick in such a way that the two halves do not come apart but form a “V”, and then a drop of water is added to the tip of the “V”, the stick straightens up. We could not figure out WHY and said so to the viewers. They responded by sending several answers, some of which seemed plausible and were discussed in a subsequent session. Through such experiences we learnt how difficult it can be to find an adequate scientific explanation to even an apparently simple phenomenon. This could never have been possible in a quiz program of the usual type where “the correct” answer is what is written on the cards held in the hands of the quiz master and there is no scope for discussion or revision.

In this context, I would like to add a small rejoinder about the positive fallout of QUEST on classroom teaching. Bernoulli’s principle and Torricelli’s theorem were part of the syllabus (Honours level) of my university but there were no experiments on them. To compensate for that, in my class, I used to demonstrate one or two experiments, borrowed from QUEST, with sheets of paper, books, and a plastic bottle filled with water. These were highly appreciated by the students.

In QUEST, the central place was accorded to scientific objectivity and content of the deliberations; hype about winning or losing was not there. In fact, participants of different schools were mixed up and then divided into two teams – the Bose team and the Einstein team. And members of a particular team were encouraged to discuss the answers among themselves during the allowed time. There were no tears, unlike the present day reality shows! Still there was no dearth of viewers; which goes to prove that good science programmes on TV do have takers in India. As compared to one or two channels of Doordrshan in those days, now there are hundreds of channels – but, alas, there is not a single Indian channel devoted exclusively to science.

That brings us to the topic of educational TV in India. Mainly through government initiatives there have been a number of attempts to use TV for educational purposes. Programmes produced by the UGC through its network of Media Research Centres and later by the Indira Gandhi National Open University used to be telecast by Doordarshan on a regular basis. UGC used to have its “Country Wide Classroom” around noon time. From my personal experience [as an occasional participant] I can say that it was watched by a reasonably large number people and many of them were not students. The Educational Media Research Centre at Kolkata used to receive so many queries regarding the content of their telecasts that they had to start a new programme – Question Time – to answer some of them. But with the advent of cable TV and commercialization, DD pushed those programmes to such time slots that they were hardly ever viewed. Now, of course, there is a dedicated satellite channel – Gyandarshan – which accommodates all such educational programmes. But it seems its viewership is nowhere near that of the Discovery or National Geographic channel. Producers of educational TV programmes in India must find a way to reach a wider section of the viewers to do justice to the huge effort that goes into the making of these programmes. Virtual classrooms are a different proposition altogether. They too are not immune to syllabus driven rote learning.

The National Council of Science and Technology Communication (NCSTC) is another organization of the Government of India, which initiates and supports communication of science and technology through various NGOs. They aspire to work outside the realm of formal education and support activities which can be broadly categorized as popularization of S&T, which include production of films, books, dramas on S&T, and organization of events like the Children’s Science Congress. They certainly contribute a lot in that field but are limited by the strait jacket of a government department.

A physics student – or a teacher for that matter – is not trained to write short memoirs. I hope this article does not create an impression that I have only negative criticism for the job I did. There certainly were moments of dissatisfaction. But I have shared innumerable happy and stimulating moments with my students as well as the audience beyond the classroom. I consider myself fortunate in that.

To conclude this brief story of a teacher who tried to communicate science both in and outside the classroom, let us ponder over what are the lessons learned. One is certainly that the grip of rote learning in the formal sector is very tight and the general climate is not conducive to questioning and thinking out of the box – as so successfully portrayed in the film Three Idiots. Second, for physics students especially, DOING things with their hands must be encouraged at all stages. Unexpected revelations may come through simple experiments. Last but not the least, a sincere and sustained effort must be made to imbibe the spirit of science [which we are compelled to learn through mostly dry textbooks] into one’s world view. Science is not just a collection of facts and laws. It is a way of thinking.

The author is an Associate Professor of Physics (Retd), City College Kolkata. He can be reached at pbandyo@gmail.com.