Benjamin Franklin once said that there are only two certainties in life – death and income tax. If the man of many inventions had been working as a teacher in India, he would have added one more unfortunate certainty to his short list – election duty! Come election time, when dubious characters of questionable integrity make a run for Parliament or the Assembly, teachers remain quivering in their shoes as they wait for the dreaded polling duty list to be released. When I was green, I used to wail much like the woman in Coleridge’s poem ‘Kubla Khan’ whenever I found my name on the list. But now that I’m mature, I realize that performing this task every five years is one way of expiating all the sins that I have committed in that period. One needn’t go to Kasi or Benaras anymore.

For the general elections in 2004, I received a letter informing me that I had been made a Presiding Officer and that it was mandatory to undergo a two-day training course. When I entered the room, the lady IAS officer who had the unenviable task of training us was at the mike welcoming the reluctant participants. The importance of election duty is not a topic that is likely to enthuse those who have been arm-twisted into doing it; such tasks should be assigned to individuals who are capable of galvanizing a crowd – especially an inert mass like ours. Unfortunately, the woman in charge lacked both the communication skills and the enthusiasm to do this. Her apology of a presentation combined with the April heat succeeded in putting us to sleep.

A week after the training session, another letter followed; this time it was to inform me that I had been posted in Zaheerabad and that I was to report for duty two days prior to the elections. Spending two days at the polling station was bad enough, but three? I decided that I would do no such thing. When I reached Zaheerabad a day before the elections, I found pandemonium reigned in the Junior College that I was asked to report. The man who had taken an adhesive attitude to the mike was screaming his head off, and like me there were many others who were reporting for duty a day late. When I handed in my order, the man asked me why I hadn’t reported a day earlier. I told him that since I had undergone training in Hyderabad I didn’t think it a necessity to come two days in advance. He shook his head sagely and gave me my polling station number. Before meeting the rest of the members of my group, I decided that I needed to relieve myself and so asked a zonal officer where the bathroom was. He pointed to a distant compound wall, smiled and said, “Outside, sir”. Since I was in no mood to water the plants or the trees, I went ahead and met the rest of the members of the group who had all arrived the day before. I asked them what happened. Rajender, the Assistant Presiding Officer summed it up in one word, “nothing”. Apparently the Zonal Officers made them sit under the shamiana all day long informing them that they would receive training. But nothing happened. 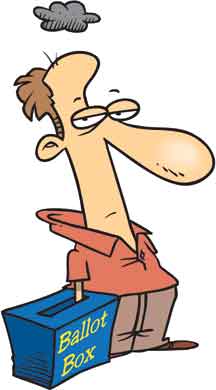 After picking up our electronic voting machines and various other forms and envelopes, we sat together under the shamiana. The constant announcements on the mike gave me a headache. I was assured by my assitant that the school that we had been assigned was a good one. I had visions of a Hyderabad Public School, but when we finally reached our destination in a jeep, I found that the school consisted of three or four small rooms inside a temple. The classroom that we had been given had no fan and no lights. We were asked to spend the day in the temple hall and get ready for the following day. The rest of the day was spent in filling out the various forms and in the setting up of the polling station. We realized that the authorities hadn’t provided us with the sticks required to set up the voting booths; instead of waiting for the authorities, we bought the sticks ourselves. As I went to bed that night, I kept reminding myself that the following day at 5: 00 p.m, I would be a free man.

The next day began early. Since there were no lights, I used my nose to find the bathroom. Unlike the other rooms, the bathroom was air conditioned – the top half of the door was completely missing. As I sat there, I was reminded of Shakespeare’s line from Macbeth: “not all the perfumes of Arabia can wash the stains off my hand”. Except in this case, the second half of the line would have been replaced with “can remove the stink from this bathroom”.

There were moments of amusement as well. On the day of elections, at 7 a.m, when the polling was all set to commence, the Polling Officer from the adjacent polling station came running and wanted help in sealing the electronic machine. As I stepped out to help him, the voters standing in line asked, “kya saab chai pine ja rahen hai kya?” Another replied, “nahin, saab abhi training ke liye ja rahen hai kya”?