A society of first-generation-learners goes through experiences most strange and unimaginable to the members of a society which crossed that stage many decades ago. Even if the latter had gone through similar experiences several generations before, these memories hardly survive as societies evolve. So much so, an educationally advanced society is often insensitive to the struggles and peculiar hardships experienced by first-generation-learners in another part of the country. Unfortunately, at times, they do not get noticed even by a government, rulers or the schooling system. However, a pro-active administration may to some extent, try to compensate or support such a struggling society, by initiating innovative measures. In the midst of all these, many incidents occur, some memorable, some inspiring, some sad and some ‘a slip between the cup and the lip’.

Arunachal Pradesh, at the eastern end of the Himalayas, known at the time of Independence as NEFA (North East Frontier Tract), was a state that had several first-generation learning societies, living in remote locations. Free India’s administrators tried several unconventional measures to bring up a generation of educated Arunachalis in the 1960s and 70s. One such initiative was to take a few select Arunachali children from different districts to other parts of the country and provide them an all round but free school education. Batches of students were also taken periodically for ‘Bharat Darshan’, giving them opportunities to interact with national leaders.

R. K. Khrimey, a pro-active former Education Minister and MP from the state, was one of the earliest well-educated Arunachalis. He once narrated this incident from his school days.

Young Khrimey was once selected to be in a group of Arunachali students taken by the Education Department on an excursion to New Delhi. The party was being escorted by a non-Arunachali teacher, whose son was also a student-member of the group.

Reaching Delhi, the party enjoyed going around historical venues and visiting large markets. They were also glad to learn that they were to have an audience with the (then) President of India, Dr. Radhakrishnan. Explaining the great significance of the visit to the students and the etiquette to be observed, the NEFA officials in charge of the visit, got the team to thoroughly prepare to answer questions that the President might ask them. 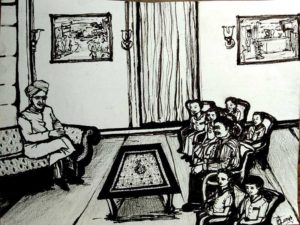 The Arunachal group arrived punctually at Rashtrapati Bhavan and were taken to the reception hall and asked to wait for the President. Dr. Radhakrishnan welcomed them warmly after which the team members were introduced to His Excellency. Starting with a few simple questions to the students, a pleased President then asked them to sing a song. Khrimey stopped his story and looked all around. We looked at him eagerly.

He continued: ‘The Arunachali students were silent for a moment, mentally getting ready to start. As the teacher was looking around, suddenly the teacher’s son stood up and started immediately, “Jana Gana Mana…”. It came as a shock to the President! He jumped up and stood stiff, followed in a hurry by the teacher and all the other members of the team.

As the boy concluded the national anthem, Dr. Radhakrishnan turned to the escorts and said that as the meeting has been formally concluded (with the singing of the national anthem), he would not be able to remain there and must leave! However he instructed his staff to feed the students well.

Khrimey said to us that he and his friends just did not know what suddenly prompted the teacher’s son to stand up and sing the national anthem. “We never got a satisfactory answer from the boy,” he said.

“All my life, it shall remain a mystery”, he concluded.

Truly a slip between the cup and the lip….!

The writer is an educational activist living with Arunachali youth for nearly four decades and coordinator of the Lohit Youth Library Network. He can be reached at lohit.libraries@gmail.com.