The readers of this column know that I work at the English and Foreign Languages University, Hyderabad and many readers, I suspect, have also worked out that I live on campus. Just outside my window is a small children’s park with a slide, a see-saw, a couple of swings and a small roundabout. Earlier in this column I have written about the children who play in this park. I have to pass the park every morning and evening and it is very interesting to watch the children interact, play, squabble, and also make up.

One Saturday evening, the usual motley group of children was playing on the slide and the swings, with the usual ‘battle’ for the swings in full swing. A middle-aged lady walked into the park with her little granddaughter (who was not more than 5 or 6 years old) and helped the girl climb the steps and get to the top of the slide. This lady does not live on campus; she must have come to visit someone; she was also not someone who was very comfortable with the slide, but her face showed that the idea of getting her granddaughter to slide down was something she wanted. So, up the child went, with a little help, and sat on top of the slide. Behind her, other children also climbed up and of course, wanted to experience the joy of sliding down, but they could not for the little child refused to slide down. She sat there, right on top, holding on to the two sides of the slide, and began crying loudly. The poor grandmother was flummoxed. She tried reaching up to bring her granddaughter down, but that little tyke would have none of it. She held on even more tightly and screamed even more loudly. There was mayhem! The kids on the slide steps were yelling; the other adults tried telling this little one in Telugu to come down and even offered to carry her down. Nothing worked. The little one held on with all her might, wouldn’t let go and kept crying. The grandmother was too old to climb up and bring her down; none of us parents or caregivers knew this child and so did not want to forcefully prise her hands off the slide! We really didn’t know what to do. And then, suddenly, from behind, Mudabir, a young boy, around 12, who lives nearby, got the other children who were on the steps of the slide to give him some space and climbed up to the top of the slide. He didn’t say a word to this little child who was actually petrified. He just acted. Very carefully, he sat behind her, and put one arm round her waist. Then he gently brought his two legs on either side of her so that she was actually sitting in front of him; holding on to her with one arm, he used the other hand to carefully remove her hands off the sides of the slide. This little one, who had refused to let go and had been screaming, quietened down and let Mudabir do what he wanted. Once he got her to let go of the sides, he gently began moving down with her. 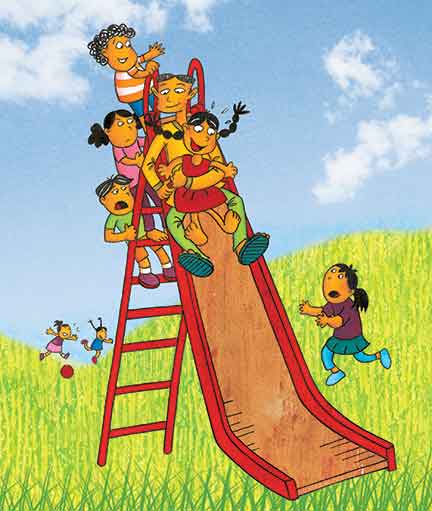 I don’t think I will ever forget the expression on that child’s face. It was transformed. The crying had disappeared and the face was alight with joy. At that point I realized that most probably, this child had never been on top of a slide before. She was used to climbing stairs and so, with help, had climbed up. But looking down from that height is quite daunting for a little kid who is expected to let go and slide down. Frightened, she refused to let go, but did not know how to explain this. At the same time, having seen other children climb up and slide down, wanted to experience the joy of sliding and so did not want to be taken off the slide either.

None of us adults (all teachers at the University) had been able to understand this! It took a ‘nearly-into-his-teens’ young man to grasp this and he did it in a flash. What was even more interesting was that the other children who had all been yelling, ‘go down, go down fast’ in Hindi, Telugu, and English, and refused to move from the slide steps, did not have to be told that Mudabir was not ‘competing’ with them. They instinctively knew that he was there to help; these other kids were not old enough to do what Mudabir did; they were not able to act as the more abled peer but they understood and gave him right of way.

The little kid had her first slide ride, ably assisted by Mudabir and then play time continued.

I went home and then asked myself: What made Mudabir ‘know’ what to do? Why did we as adults, who have all studied and who espouse learner-centredness not understand the plight of the child? It is not because we did not want to. All of us tried talking to the child but that did not help. We may not have been able to climb up and do what the young man did but that is not what bothered me. It bothered me that such an option never occurred to me.

We seem to have forgotten human-centredness in our teaching; the probability of different world views and most importantly, the presence and absence of different experiences. It never occurred to us that this kid was holding on and screaming out of fear and at the same time, refusing to let go because of her own expectations.

Mudabir understood and so he acted or rather reacted in an appropriate manner. Will he make an excellent teacher someday? I sincerely hope so.

Quite often, in our classes, we have students who refuse to ‘slide down’ as it were; who don’t read the texts prescribed or do the assignments given. Could this be because of fear of performance? If we tried to see these students through Mudabirian eyes, will it help? Probably yes! Are there pedagogic equivalents of scaffolded sliding down? I am sure there are but the ‘problems’ if we can use such a term, and the solutions will be as different as the varied human beings in this world.