Most of the ideas in this article have come from Seymour Papert, the main proponent of constructionism. Papert passed away in 2016 after meeting with a near fatal accident a few years ago. We use parables and ideas from Papert and our experience with children, computers and constructionism to make arguments in this article.

A few years ago after a talk which exemplified the use of computers in novel ways, one of the authors (Amit Dhakulkar) was asked this question (not verbatim, but close):
“So, considering that the activity that you have designed requires a computer and expEYES (an indigenous hardware for collecting data), how can you scale it up to schools which have millions of children?”

The author was expecting this question and the short answer to that was: “You give a million computers to a million children!”

Some people thought, this was a rhetorical answer to a rhetorical question, which incidentally was also humorous, as it generated a lot of laughter, but that was not the case. In this article we elaborate on that short response.

Computers as media and tools for learning 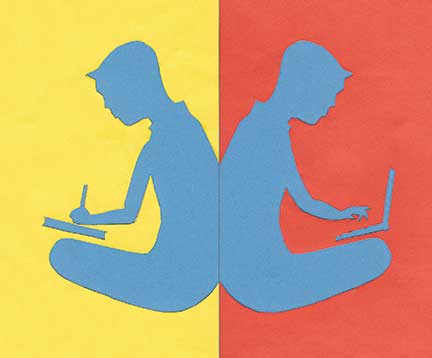 We primarily tend to think of computers as computing devices, especially computers in the hands of children. This was perhaps the case a few decades ago, but today’s computers are more than computing devices. Computers are now capable of scaffolding learners in ways that were earlier unimaginable. The most important aspect of computers and learning is that they give children access to knowledge which helps them become more knowledgeable. The connected computers form a part of our lives and connect us to the rest of the world. In this era, a computer in the hands of every child is equivalent to a notebook or slate. We have come to a stage where the role of a slate or paper notebook can be replaced and enhanced by a computer. The learning that ensues is not a difference only in degree, but in kind. Just as it is considered natural for a child to have a slate or a paper notebook in school, we argue that a computer (used properly) in the current age is no different. But this change will radically alter many ideas about education that are deeply rooted and cherished, by challenging the foundational assumptions of our educational system. We discuss one such assumption about writing with hand as being mandatory for any school learning.

A parable from Papert
Consider a classroom of 50 years ago. Though there were computers they were something to be wondered about, something like expensive toys. The computers were not mature enough that children could handle them. In the classroom, only available technological artifacts were used. The technology in the classroom was the pencil and the printed book and notebook to write in; of course there was also the blackboard. Imagine if someone had done a study about the efficacy of pencils and notebooks in a class the way studies are done for computers these days. We give children pencils for one hour each day to write with, and one pencil has to be shared amongst three or more students. What kind of results would you expect at the end of, let’s say, two months? This is what interventions and studies with computers are trying to do. They let children touch the computer for a minimal mandated time and expect that just because they are using computers, the results will be fantastic.

The image of writing with a pencil on paper is so deeply embedded in our psyche that we define it as the normal for our learners to be able to use it, and do not consider this as technology. The entire edifice of our educational system rests on it. For example, one’s educational achievement is more or less based on how much one can “write” in a limited time, mostly based on one’s memory. The written text seems to have a hold over our intellectual activities. The text formed the basis of our discourse and analysis of the world ever since the invention of printing.

The only reason we ask children to write “A” 500 times in a notebook is because it comes from an era when there was no other technology to write. And these are the same learners who can converse well and answer questions, yet we need them to write using their hands, no matter how difficult it is for some of them. Most of us still think this is the only method for learning. Let us consider the amount of time a child spends on mastering the strokes of a pencil for legible handwriting and mastering the sentence and thought construction? Four to five school years, or even more for some. Would such an ability develop if the child was given access to the writing technology of pencil and paper only for an hour per week, that too when shared with his/her peers?

In contrast, typing on a computer provides us, and especially young learners, with cognitive offloading of the task of holding a writing instrument and shaping an alphabet, a word, a sentence out of it. How easy it is to create “A” by typing a key, as compared to using a pencil? This might be trivial for adults who have years of practice in doing so, and might have forgotten their own struggles when they were children. Children learn to type much faster (even in Indic scripts) than they learn to write with a pencil. For example, under the One Laptop Per Child (OLPC) pilot project running in Khairat, near Mumbai, primary school children can type fluently in Marathi. By the time they can write the alphabet legibly with a pencil, they are already typing sentences on a computer. This was made possible by their having access to computers even in their homes. This example provides us with a definite contrast between the two technologies, one providing accelerated learning while the other following a long and tedious path to the same goal.

And what is even more important is that the written text is in electronic form, which can be revised and shared with peers and teachers. Just like this article was revised, shared and improved many times. In a handwritten text, there is no question of revision, creating the original takes too much time and effort to produce, so there is no question of revising it. And this is needed more by children than adults, who are just learning to express their thoughts in written sentences.

A relic from the past?
Considering the amount of cognitive load the child has to experience to produce decipherable letters, words and sentences in order to “write” something she can narrate orally quite well, one wonders if the results are worth the effort. Yet, this method is used everywhere without exception and we accept it meekly without any challenge because this is how it was done in the past, and someone in the past must have had a good reason to do it. Now consider how we adults are using the computer for the same purpose. The computer has become the medium of writing text for all adults, and it has changed our writing habits. We use the computer to write, because we find it useful to edit, reshape and revise the text, which would be very difficult, if not impossible, with handwritten text. Yet we want to deny this to our children, who are already challenged cognitively, by not allowing them to use computers as tools for learning and forcing them to write with the pencil.

Papert calls this the “QWERTY Phenomena”. Some things just get culturally embedded because they suited a bygone era. Such practices are like relics in the current era, which do not have any logical or technological relevance today, but only historical. We argue that writing with pencil and paper is just another phenomenon in this category. And perhaps, in a couple of decades, even typing using a keyboard on computer might be.

Now, we reconsider the question that was asked at the beginning of the article. We replace the computer with a pencil. The question then becomes:
“So, considering that the activity that you have designed requires a pencil and a notebook. How can you scale it up to schools which have millions of children?”

Suddenly the question seems rather bizarre and trivial at the same time.
“Of course you need millions of pencils and books for millions of children. And we do have them in our schools.”

One might say that the pencil and notebook are so much cheaper than the computer. Yes, indeed they are. But consider that a well-designed computer like OLPC can serve a learner for 5-6 years and can remain with them through the schooling years. Our pilot project with a tribal school in Khairat has showed that laptops can serve for more than six years in rural conditions in the hands of children. Calculations show the investment that we seek over the time period (six years) is rather modest, considering the gains. There are cases where governments have given computers to all the students, Peru is one such example.

In general when something becomes more common, it also becomes cheaper. Mobile phones provide an excellent proof for this argument. Now, if some sociologist would have done a study regarding the usefulness of mobile phones, perhaps 20 years earlier, he/she might have had some statistics to show, but the critics would have said, “but the cost is too prohibitive; do you seriously think all (or most) of the people can have this; and people who cannot read and write will be able to use this; people do not have electricity and food to eat and you want to give them mobile phones?”

But look at where we are, because people have found contextual and personal value in using a mobile, it has become their personal assistant in communicating with others. With proliferation of mobile phones, the cost of the hardware has come down, the cost of tariffs has reduced and almost everyone can afford a mobile phone now.

Continuing with mobile phones, we point to another “experience” that many of us might have had. The smartphone is a complex technological artifact and operating it requires considerable expertise. Even though adults find it difficult to operate such a device, a child when given access to such a phone, deciphers the working in almost no time. How is this possible? Have they been trained to use a mobile? This leads us to claim that the most important thing to make meaningful use of technology for learning is to provide access to the technology. Limiting access also means limiting the radical ideas that can fundamentally redefine the way our children learn.

Further reading
Many ideas and parables are from Seymour Papert’s books: Mindstorms: Children, Computers and Powerful Ideas and Children’s Machine: Rethinking School in the Age of the Computer. Also many of his articles can be found at www.papert.org.

Acknowledgements
We are grateful to Prof. Nagarjuna G. for his valuable comments.

Amit Dhakulkar is with the Centre for Education, Innovation and Action Research, Tata Institute of Social Sciences, Mumbai. He can be reached at amit.dhakulkar@tiss.edu

Rafikh Shaikh is with the Gnowledge Lab, Homi Bhabha Centre for Science Education, Tata Institute of Fundamental Research, Mumbai. He can be reached at rafikh@gnowledge.org.