Pushpa stood dismayed in the middle of her class – she was at a total loss to understand how she would manage the class today. In the MG Government School where she had been working several years, she was considered a senior teacher. Hence on days when the others were absent, or as was often the case, when vacancies were not filled, she was expected to handle over 40 kids. This would not be as much a challenge as she was used to handling these numbers and more – but on these days, kids from all other classes would be bunched together – ranging from pre-primary to middle school – giving her what the technical experts called a multi-grade classroom. She needed new methodology to handle these classes. Such classes existed even earlier, but in those days it was sufficient if she just “minded” the children – kept them quiet – it was not so important to ensure learning. But now with new educational policies and parents getting more aware, it was important to ensure that the students also learnt. She was really in a fix as to how she could teach children of different age groups together and yet make sure that all of them learnt something. 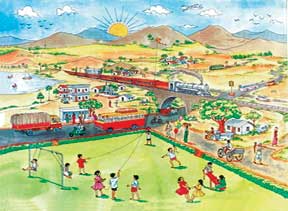 Today she had already planned some English work for the Grade 5 students and some math work on fractions. She needed to keep the younger ones in the loop too. This is what she decided.

English: The concept that she was handling for the older students was adverbs. She now modified her original plan and decided to do the same thing but in a slightly different way.

She got out a chart with a comprehensive picture of the environment somewhat on the lines of the one given below.

She asked the Grade 1 and II students to carefully look at the picture and draw pictures of the things in the picture that they also saw near their home or school. For instance, if there was park near their home or school, the children had to draw a park. She made them sit together in a semi-circle so that she could see them all and the children could also see the picture clearly. She also gave them permission to colour the pictures that they had drawn. There were some in the group who were quicker and so she told them that they could write the names of the things they drew beside their picture. While they settled down and turned busy, she gathered the Grade 3 and 4 students.

The author is a partner at Edcraft, Hyderabad, a firm engaged in making teaching-learning materials, conducting workshops and providing consultancy services. She can be reached at sheela.ramakrishnan@gmail.com.