‘Knowledge is power’ has been a popular and universally accepted adage over generations and across different time periods and one would argue quite rightly so. However, what is not universally acknowledged is the extent to which schools which serve such a critical function in society can be spaces that accommodate many different types of power struggles, all of which impact the nature and quality of the educational outcome. In a utopian world, schools can be characterized as spaces with unlimited academic freedom, where unbridled creativity is encouraged and where exchange of ideas, information, and knowledge happen freely and seamlessly without restrictions.

However, like any public space, our schools are far from perfect, even though they mostly operate under assumptions of the highest ideals of academic freedom and creativity. Despite the desirability of these assumptions, it is important to take a critical look at the power struggles in our schools to reflect on how they operate and what their implications are for the nature and quality of the educational outcome, in order to realize how far from perfect the reality can be. This allows us to know how best to move towards perfection, despite how elusive it might appear. Towards this end, let us attempt to explore the different kinds of power struggles that our schools are a context for. Towards this objective, this article has divided the common manifestation of power struggle into two categories, which for ease of comprehension can be labelled as ‘horizontal power’ and ‘vertical power’. ‘Horizontal power’ refers to conflicts, which typically involves power struggle between different teachers and members of staff, and also with the school management. Vertical power struggle on the other hand refers to power struggles between the teacher and the student.

Horizontal power struggle – Is there really a power conflict in school administration and interpersonal relationships between teachers?
Every professional work environment has its own internal dynamics, which determine the interpersonal relationship between various individuals who are part of the professional workspace. Therefore, how much ever we would like the workspace for teachers to be free of politics and interpersonal conflicts, the reality is that it is not entirely so. In many ways, teachers in our schools compete for recognition from the administration and better leverage within the institutional structure of the school. Also, the dynamics between teachers depend on many different factors, playing themselves out in different contexts. For instance, the school leadership often treats different teachers differently; based on the number of years in service, the subjects they teach, and the disciplinary background they come from, as well as sometimes much more implicitly, their socio-economic background. Research on issues of classroom instruction and pedagogy has suggested that one of the primary determinants of the quality of classroom instruction in our schools is decided by how the teachers are treated in the school, how their work is valued by the administration and the school management, as well as the interpersonal relationship between teachers and other office staff.

What is important however is to note that since the school administration decides the value, recognition and allocation of work to be given to each teacher, power equations between different teachers and the school management, which often refers to decision-making power by the principal or other similarly placed people, are critical in shaping the kind of experience every teacher will have. At a broader level, this could be regular office politics, but at a narrower level, it is the manifestation of how seniority and background of different teachers impact the quality of their experiences in the school, which often manifests itself in their instructional processes and interaction with students. 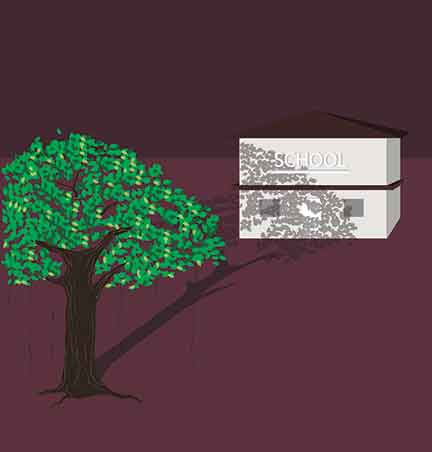 In such a scenario, the role of a school leader or a principal becomes vitally important. It is the principal or a school leader who decides the nature of interpersonal relationships within the community of teachers. This is critical for teacher motivation, and consequently, an important determinant of the quality of instructional delivery. A principal or school leader can, through the regulation of such relationships, have an impact on educational outcomes. If the school leader and principal is involved in allocation of classes and makes an effort to oversee that it happens fairly, in addition to providing equal opportunities to different teachers, irrespective of seniority or other factors, the interpersonal relationships between teachers can improve tremendously, thereby ensuring that teachers remain motivated for classroom interaction.

What is important to appreciate in this context though is that the nature of the school’s funding and management impacts the interpersonal relationships and power equations among different teachers. If the school is a public school, the nature of politics or power dynamics at play is slightly different from those at private schools, where classroom performance in terms of students performance under a certain teacher may be used to offer recognition and more autonomy and power to certain teachers over others. Since private schools are more driven by academic performance of its students in sometimes extremely competitive environments with other schools, than many of the public schools with some notable exceptions, they are more likely to reward or give greater political space in school-level decision-making to certain highly performing teachers, in their subjective opinion. In public schools however, there may be a greater propensity to use discretion by the school management and the principal, in the allotment of responsibility or in rewards and recognition for its teachers, which gives scope for power equations impacting interpersonal relationships between teachers and members of the management and other staff.

Vertical power relations – Are teacher-student relationships changing?
One of the most obvious assumptions of pedagogy and classroom instruction is that the most important factor that influences educational outcome from the teaching and learning process, refers to the nature of relationship between the teacher and student. Across generations and different time periods, this relationship has meant different things, and the nature of relationship keeps evolving, based on the way society evolves and the way society perceives the role of the teacher in relation to that of a student. Most of Indian mythology and historical accounts of education delivery in India suggests that the relationship between a teacher and student has been thought to be one of the most sacred associations, in many cases rivalling in importance the relationship with parents.

With colonization and subsequent westernization of Indian educational systems, the Victorian values of a strong hierarchical relationship between students and teachers became a vital ingredient of the nature of the student-teacher relationship in Indian classrooms. In the Indian schools therefore, the dynamics of this relationship and the ensuing power relation between a student and teacher changed in terms of the power equations between the student and the teacher. Strong authoritarian control of the students and their behaviour has been the norm in our nation’s classrooms, for the major part of India’s independent history. The authoritarian style of teaching and learning through one-way instructional flow, may have its benefits in terms of greater compliance, and which some may argue, makes students work harder and better, but it also meant that majorly, the relationship between a teacher and student was characterized by a huge power imbalance.

This however, has slowly begun to change with private schools in India becoming more of a norm than an exception, and the expectation from most stakeholders, which includes parents and students, as well as the government on many occasions, is that they do and would guarantee a better quality of instruction and education. Whether this assumption is correct or not, is another question, but an interesting dimension of this change is manifested in the fact that in the relationship between teachers and students, departing from the authoritarian model of Victorian style school education, with increasing capital flowing into schools, and with education being treated as just another service category, school teachers are increasingly being conceptualized as service providers where the parents and students are consumers of such a service. This change is also accompanied by a greater awareness of the undesirability of a highly hierarchic pedagogic model.

Moreover, these changes have had significant ramifications in how the power dynamics between teachers and students have been evolving and changing over the last decade and a half. This situation has meant that analogous to how any service provider attempts to offer the consumers what they most want to pay for, private schools have been offering school and classroom education in a manner that the consumer, represented by the student and his or her parent, most wants or demands from schools. While this might be a good thing in as much as there is an incentive for teachers to ensure that students get the best education that they deserve, what it essentially pre-supposes is that the student or learner, also sometimes represented by their parent knows best how exactly classroom processes should run.

This therefore means that the teacher also loses all ‘agency’ that any pedagogue should ideally have through experience and training, to know how best to manage and organize the classroom. Therefore, the power relations between a teacher and a student have been shifting due to a re-defined understanding of the teachers’ role from that of performing a sacred function in pre-colonial India, and then that of post-colonial India which inherited Victorian educational and academic values, to contemporary educational values that increasingly sees the school teacher as a service provider. The authority, agency and control that the teacher enjoyed in the classroom has therefore been slowly diminishing in the last few decades. This process has been accentuated by the integration of technology into the classrooms, where the teacher’s authority to knowledge can be easily challenged and questioned with the help of technology. Therefore, even though democratization of the classroom with increasing power re-distribution from the teacher to the student may be a good thing, a complete disempowerment of the teacher’s position in the class is a development in the wrong direction.

What then is the way forward?
The first step is for all stakeholders in school education, especially the school leaders to acknowledge that power relations exist in schools as much as it exists in any other professional space, with some similarities and some differences from other professions. Therefore, even though politics is an unavoidable reality in any institutional setup, school leaders and those that work with educational policy have to be aware of how it operates, so that they know how best to regulate it in a manner such that the ultimate purpose of school education does not get affected by institutional and inter and intra stakeholder conflicts. School leaders should therefore attempt to make staff rooms and spaces for the teachers free and democratic, as well as be aware of how, in the rapidly changing paradigm of educational policy and practice, teachers shouldn’t lose their autonomy over the classroom by pressure from students, technology, and/or other stakeholders.

The author is currently a Graduate Scholar towards the degree of Masters of Public Policy, with the Centre for Social Exclusion and Inclusive Policy, at the National Law School of India University. His research areas include among other things, Educational Policies and Pedagogy. He can be reached at mouniklahiri@nls.ac.in.