The Fifth Space is a concept that has been coined to refer to a space that impacts and brings together the four important spaces in a young person’s life – career, family, friends, leisure. It takes into account young people’s needs and offers them opportunities to fulfill these. It motivates them to explore their desire for personal transformation in a way that also helps them contribute to societal transformation without guilt-tripping them under the garb of ‘giving back’.

The Fifth Space recognizes the potential of young people in making positive contributions to their communities by channelizing their energies through projects that are personally meaningful and enriching. This concept was developed by Pravah with support from ComMutiny – The Youth Collective and Oxfam-India.

Over the next few issues of Teacher Plus, we will feature stories of young people making a difference in the field of education by engaging with processes that are at the heart of the Fifth Space formulation. These will be authored by Chintan Girish Modi, who has been awarded a Media Projects Fellowship by ComMutiny in collaboration with the Youth and Civil Society Initiative of Sir Ratan Tata Trust and DKA-Austria.

Ankit Chadha is a Delhi-based writer and performance artiste who quit his job as a Digital Marketing Manager with a corporate start-up to pursue his love of telling stories. Making a living by churning out content on demand seemed like a disservice to his own talent, so he decided to bank on his experience in the Delhi University theatre circuit and began working closely since 2010 with Mahmood Farooqui, renowned for reviving Dastangoi – the art of Urdu storytelling. Ankit’s story is a brilliant illustration of the Fifth Space’s thrust on individuals recognizing and pursuing their passions instead of professions.

Was it easy to make the switch? “My mother constantly kept telling me that she was worried. She wanted to know what I wanted to do with my life, if I was aware of my responsibilities, and such.” These thoughts were stitched into a new dastan he wrote about Kabir, the 15th century weaver-poet, titled ‘Dastan Dhaai Aakhar Kee’. While doing his research for this script, Ankit came across a book which mentioned that the Guru Granth Sahib contains an anecdote about how Kabir’s mother was unhappy with him because he was not pursuing the family’s traditional occupation and was singing songs instead. This did not seem too remote for Ankit, whose brother is ‘settled’ in the conventionally accepted Indian sense of being married and having career stability while Ankit self-admittedly continues to be ‘unsettled’. He has no regrets though. The joy he derives from his work is, in his view, not worth trading for a lucrative corporate job. “Quitting my job was the best decision of my life,” he says. Anybody who has watched Ankit perform to a spellbound audience will vouch for this. 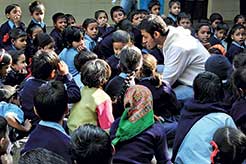 While Ankit likes to tell stories to all kinds of audiences, what he enjoys the most is interacting with children. “The choices we make define who we are. However, our schools take pride in making choices on behalf of children. Stories are my weapons to break through this situation. All I do is keep a few tales in front of kids, staying away from defining the truth. Let’s trust their imagination and purity to decide, for themselves, what they find meaningful.” Ankit is experimenting with history curriculum, hoping to make dull chapters come alive through exciting storytelling sessions. Recognizing his innovative approach, the international peace building organization, Seeds of Peace, has invited him to the United States to participate in a two-week Educators Program called ‘Making History’.

His first experience of working with children was while he was still in college. Leap Years Foundation, an organization of culturists and educationists, got him on board to design the theatre curriculum of a summer workshop for kids aged 4-13. After having performed for children at the leading schools in Delhi including Sardar Patel, Mother’s International, Delhi Public School and Cambridge, he is now a regular speaker at children’s literature festivals like Bookaroo.

Ankit also conducts workshops for teachers on how they can use storytelling to enrich the classroom experience for children. Last year, SCERT appointed him as the Resource Person for storytelling at Bal Bhawan, Delhi, to train pre-service teachers. He also collaborates with non-profit organizations, radio stations, authors, illustrators, education consultants and publishing houses to develop reading programmes, workshops, performances, events and fun activities for children.

To give this a more organized form, he has started a company called Heptullha. The Heptullha website reveals an interesting anecdote: “Once, we went to conduct a session and the Principal scolded us for not being in the uniform. Another time, the students tried to bully us. What has given us the strength to continue doing what we want to despite these ordeals is the flip side of who we are, for children – one among them. They can talk to us and share their stories. And when somebody calls you bhaiya or didi rather than Sir or Ma’am, you learn that there’s more to it than what appears.”

While there is certainly a lot of appreciation for his work, the use of storytelling as a primary tool in education is still considered too audacious an idea by many of those he approaches. What makes Ankit tick perhaps is his unafraid attitude to life. He says, “One thing I learnt in my college years was to be shameless. If you can be shameless, nothing can stop you.” The Aga Khan Trust of Culture has commissioned him as a consultant for scripting a Dastangoi presentation on the life and works of Amir Khusrau. The project also involves training of heritage volunteers from the Hazrat Nizamuddin Basti in Delhi in the art form of Dastangoi. He is now toying with the idea of introducing Khusrau, Kabir, and Gandhi to children by spinning fresh yarns. He hopes that his love of storytelling will rub off on to others as well if he continues to just work passionately. He wants to conclude with a quote he picked up from Gandhi: “What barrier is there that love cannot break?”

The author is a freelance researcher, writer, educator and traveller. He can be reached at chintan.backups@gmail.com. To know more about the Fifth space, visit: http://www.youtube.com/user/the5thspace