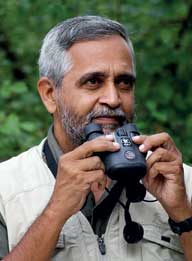 I was once given a beautiful set of videos sourced from the United States for my biology class. The well produced series on physiology convinced me to look for more of such resources. In the 1990s, the easily available wildlife videos were generally produced by the National Geographic or BBC. But I wanted wildlife series that depicted something of the diversity of India. My search led me to the discovery of some excellent documentary films on Nature made by professional photographers and filmmakers from India. One of them was Suresh Elamon. Writer, Naturalist, Wildlife Photographer, Wildlife Film maker, Suresh’s film documentaries and writings about the biodiversity of southern Western Ghats are a valuable resource for teachers.

His latest production ‘HOME our garden of Eden’ is the recipient of two awards, both in the Children’s film category. It has won the award for the Best Children’s film at CMS Vatavaran 2011 and the Golden Beaver Award for the best film at the recently concluded National Science Congress at Bhubhaneswar. This is a video that educational institutions must have in their collection.

This video is about a father’s gentle chiding when his children clamour to explore Periyar Tiger Reserve. He tells them that the first place to observe wildlife is in their garden. With his assistance, the video captures the discoveries of two children as they set out to see what their garden has on offer, before embarking on a study of wildlife in any forest. To their joy, they discover that there is plenty on offer, even finding a new species of spider in the backyard of their home! This is the underlying message of this film. A timely reminder that the forests are not the only place for wildlife and that there are more fascinating creatures to watch than the tiger and the elephant.

What a world unfolds when they begin to look around their garden! We take the squirrel in our garden for granted, but the video tells you more about their nest building than what meets the eye. Suresh shows and responds to his children’s enthusiasm by providing settings to invite creatures to share their garden. The simple techniques – nailing a coconut on a tree, keeping a water bath, making a feeding table, providing nesting pots – are tips for teachers who want to design field studies for their class. Studying biodiversity for an environment science or biology class can then take on a whole different hue! Cockroaches and frogs, the traditional biology class specimens can easily make way for squirrels, wasps, butterflies and birds. 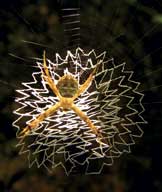 This film is a treasure trove of information for teachers. It helps identify many of the commonly seen creatures in our gardens and outdoor places. The photographer in Suresh ably captures poignant moments in the life histories of several creatures. Besides the sheer delight of watching the animals, these will help an interested amateur naturalist learn how and where to look for specific details. There are several life histories covered in the film. The mud wasp gathering clay and converting it into a soft squishy medium for its nest or the paper wasp Ropalidia and its pupa; the orb spider’s egg cases and emergence of the young; Red Pierrot butterfly’s life history; magpie robins and their chicks and many such events that are both a source of joy and education.’I have only covered 1/4th of what can be seen in my garden’ remarks Suresh. From fruit bats to moths, water striders to lizards, ants to treepies, commander butterflies to barbets – if all these constitute only one fourth, imagine how much we choose to ignore or remain oblivious of!

Unlike documentaries that have professional voices commenting on the events, a child’s voice describing her discovery adds a certain charm to the video, despite the dialogues sounding rehearsed. The professional photographer that Suresh is, he has used his skill ably to show more than what the eye can see. His camera brings certain private moments that we may otherwise miss. The first few shots of this video taken at the Periyar Tiger Reserve instantly capture one’s attention.

I suggest that schools screen this video for parents. There is a lot that parents can contribute to their children’s knowledge. This will be an eye opener for them to know how there is more to studying biology than biotechnology and medicine. Their children might be inspired to discover new technology by observing wildlife. It was after all an observation of spider’s web that led to research and discovery – of the web material having potential to produce bullet proof vests. Time shared with children in observing wildlife at home will be quality time for bonding and this video provides lots of useful ideas for the same.

Suresh Elamon has produced several documentary films on diverse life forms that have won him awards for his camera work and direction. ‘In quest of the frogmouth’s nest’ was a film of 13 minutes duration on the nesting of the rare Sri Lanka Frogmouth. It entered as a finalist in the BBC Wild screen 2002 Wildlife Film Festival. Many of his films have won him awards. Flora of Kerala (SIET), 2006 and Butterflies (SIET), 2007 were given the National award for Best direction and film respectively; Birds, our winged friends (SIET) in 2006,Flowering plants of Kerala (SIET) in 2007 for Best Camera; Angels in Tigerland (Butterflies of Periyar Tiger Reserve) for best cinematography from CMS Vatavaran in 2009.’ Home our garden of Eden’ is the latest addition to the award list. 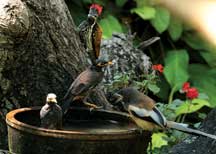 As the film is of 30 minutes’ duration it can easily be used in a traditionally structured class. Almost all of his videos are of a similar duration and can serve as a resource for teachers. A full list of his videos with their prices can be obtained by writing to him at [email protected].