I was standing at the bus stop the other day, hoping to find an auto-driver willing to brave the rush hour in the rain. The lady ahead of me stopped an auto, and as she climbed in, told the driver to switch off the music. The next auto came by a minute later, and here too music was playing. The driver asked me if I mind the music and though the rain and traffic were creating enough noise, I told him that I didn’t mind, though I did ask him to turn down the volume a bit. He actually turned around to thank me. He’d just gotten some new songs and hadn’t had a chance to listen to them all day because all his customers had asked to have it turned off. I thought about it, and I realized that I usually do that too. The only reason I hadn’t, that day, was because I’d seen the face of the earlier driver fall, when the lady had asked that of him. Auto drivers spend hours driving from place to place, away from family and friends and conversations only with others during the chai-breaks. Wouldn’t listening to soft music make their day more enjoyable so long as the passengers were not at risk? 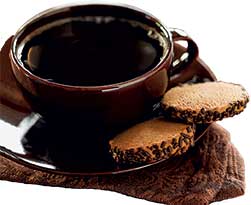 I’m reminded of the ad on television where a woman out shopping smiles when the vegetable vendor adds another vegetable to the basket tipping the scales over by just a bit. I remember feeling the same way when I went out for a cup of coffee and was given a cookie to go with it.

We all like being given a little extra every now and then, whether it is a cookie or some encouragement… anything for that matter that acknowledges us, our needs, and our efforts. You have to admit there is something special about having someone come up to you and appreciate something you’ve done, when you hadn’t even realized that they knew about it!

When I was younger, my sister and I used to spend Saturday afternoons at an animal shelter. We’d walk the older dogs and cuddle the younger ones. It wasn’t all fun… we also had to clean out the smelly cages and feel helpless when there was nothing that could be done about the ones who were very ill. But now years later, the memories of the puppies scrambling over each other to touch my outstretched hand are still strong, I having been at the receiving end of their unconditional love.

Whether you write a note, give a gift, or spend time with someone, these actions show that you care. With the “Joy of giving week” being celebrated this month (October 2-8) you can do these simple gestures and much more too!

You can’t help everyone or give all your time away but you can take time to make a few people or animals feel special. Do you remember how it felt when someone went out of their way to help you? Pass that on! It’s the extra that we’ve all come to appreciate, and by doing the “unexpected” we can certainly bring a wag to someone’s tail or a smile to someone’s face… not to mention our own!