“Welcome to APNE Library!” A group of bright-eyed school girls greet us inside a small building in Wakro, a town in the Lohit district of Arunachal Pradesh. It is a cosy room with a yellow door and neatly arranged books on wooden racks. Strings with magazines clipped on them are tied in each corner. Colourful posters adorn the walls and a little girl reads out a poem she has written. I ask who her favourite authors are and pat comes the reply, “Ruskin Bond and Dr. Seuss!” 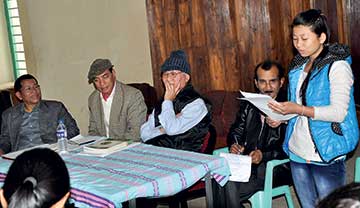 The students are all village girls studying in a nearby school and they visit the library after school hours. They fluently read out stories from Mary Ann Hoberman’s popular book You Read to Me I Read to You. We are impressed! Who could have possibly encouraged these kids to read so well? We soon realize that it is none other than our friend, Satyanarayanan Mundayoor also known as Uncle Moosa, a thin bird-like man with a relentless supply of energy and good humour!

Joy of reading
In fact, it was this relentless fervour that made Uncle Moosa start 13 libraries across the hilly region of eastern Arunachal Pradesh. He mobilized young volunteers to run these libraries and this year marks the 10th anniversary of the Lohit Youth Library Network known for its ‘Joy of Reading’ programme. Uncle Moosa’s initiative to promote literacy amongst the youth has created a large pool of volunteers or ‘reader-activists’ as they call themselves.

Considering the impact these activists and libraries have had on readers, it would be useful to trace their journey by getting to know the stories behind the struggle. Stories both real and in books that have given the youngsters of Arunachal Pradesh a love of reading and a vision of a better future. 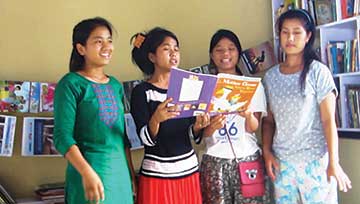 “I realized that most children in villages did not profit from the time they spent in class and lacked basic resources to improve literacy,” he said. “School libraries were and still are non-existent or most often shut. The students had no access to books more so during their holidays and this sad situation made me determined to get books over to them even though it meant crossing swollen rivers or rugged mountains.”

In fact, this is exactly what Uncle Moosa did! In the early years, public transport was erratic and roads were broken. With cartons full of books, uncle trudged long miles to display them in villages and read out stories to children. Also, students of the Vivekananda Kendra Vidyalayas where Uncle Moosa had initially worked were given bagful of books to take home during their vacations to run home libraries themselves. These tentative efforts of drawing children to interesting reading material were the modest beginnings of the ‘mini library’ movement back in 1992.

The first libraries
The first people’s library however was started in Etalin, a small town in the remote Upper Dibang Valley in 1999. It was run by a Mishmi teenager called Rupi Meya who encouraged the village children to visit the library during weekends. Although a school dropout herself, Rupi also helped Uncle Moosa conduct adult education classes for rural women in the evenings thereby improving her own knowledge of English. Even though the library shut after a year, the experience convinced Uncle Moosa that with the support of enthusiastic youngsters, nothing was impossible and sure enough a strong library network emerged in 2007 thanks to his perseverance and that of his volunteers.

Bamboosa library
A bright, young girl and two of her companions impress us with a freshly improvised skit on deforestation based on a poem they have just read. They use mime, voice modulation and appropriate body language to make the audience aware of how illegal logging affects the environment. The performers then help readers choose the right books and read out stories to them – peer learning at its best. But where do all these activities take place? In Bamboosa, the headquarters of the Lohit Library Network of course!

The name ‘Bamboosa’ is derived from the bamboo plant commonly found in the northeast but the library is far from being ordinary! It was started in 2007 with the support of the Association of Writers and Illustrator’s for Children (AWIC), the Om Prakash Foundation of the US, the Vivekananda Trust in Mysore and a host of well-wishers led by a dynamic IAS administrator called Prashant Lokhande. Today, the Bamboosa Library is housed in a brand new building and is supported by a dynamic women’s group called the VKV Tafrogam Alumni Education Society (ViTAES).

It was in Bamboosa that an enthusiastic young volunteer called Etalo Mega joined Uncle Moosa in 2007. His aim was to make libraries dynamic centres and not just ‘silent reading rooms’. When asked what exactly he had learned about library management, Etalo modestly replied, “Uncle Moosa had a completely different idea of how a library should function. He told me that books have to reach children so that they become interested. We soon began visiting remote village schools, taking them books and organizing events like recitations and book readings.”

Several children have been trained by Etalo on how to develop good reading habits and even though Etalo now works in faraway Itanagar, volunteers keep in touch with him and consult him especially during reading campaigns.

Uncle Moosa meanwhile acts as a coordinator and continues to visit libraries. He interacts with readers and guides them in storytelling activities, skits, quizzes, songs and games. A recent innovation is a set of stories read out and recorded by volunteers themselves, which is then shared on WhatsApp to make reading more engaging!

Totochan and Calsom libraries
In the Calsom School in Tezu again, there is a single room with books neatly arranged on shelves or in cupboards and this is the school library that children love to visit. Although small, it is run by a dynamic librarian called Sukre Tamang who is joined by Rejum Potom, a teacher.

Teachers getting involved in library activities is a boon because they can motivate students to read by using ‘out of the textbook’ methods that also improve the proficiency levels of teachers as Rejum confidently states, “My reading fluency improved due to the variety of books I read in the library and my discussions with uncle also helped me speak better. The book ‘Totochan, the Little Girl at the Window’ taught me to treat students with compassion and not force them into rote learning or scold them harshly by showing the stick.”

The Totochan library in Hawai, as the breezy headquarters of the Anjaw District is named, (as we have just read), after the famous character from a Japanese storybook. It was started in 2008 by social activist and book lover, Bajai Pul and thanks to his initiative, the library is functioning well!

A group of high school girls, passionate about sports regularly visit the Totochan library. It is therefore not surprising to see them leaf through sports magazines or comics after a tiring game of volleyball. When asked what their favourite books are they chirpily reply, “Sportstar and Amar Chitra Katha!” 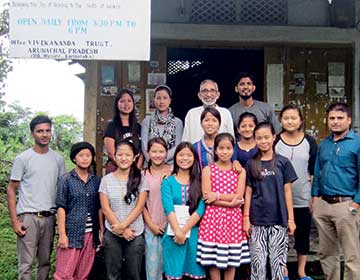 The APNE Library was set up in Wakro in 2008. In such a small town where attractions are few it is heartening to see groups of enthusiastic students of a residential school run by the Anu Shiksha Seva Trust (ASSET) making their way to the library after study hours and getting lost in books. Two dedicated teachers, Vijay Limbu and Kamlesh Raut are in charge of the library and when asked how books impact young readers, this is what they say:
“The children are happy and safe in this library. We’re impressed at the way they read books and interact with one another. These young girls are doing much better in school than others who never visit the library.”
“Books are magical!” exclaims another teacher from a nearby school who is also an enthusiastic volunteer.

The existing libraries are currently spread over four districts of Arunachal Pradesh – Lohit, Namsai, Anjaw and the Lower Dibang Valley and are headed by an advisory board. They attract a large number of visitors from India and abroad. Book lovers and experts from diverse fields such as puppetry, theatre and wildlife conduct workshops for youngsters to connect them to various other domains. The press plays an important role here by covering these events in newspapers and television.

Aim and ownership
Why did Uncle Moosa start these libraries? It was to create an enduring reading culture in Arunachal Pradesh but Uncle Moosa wants communities to take up ownership in many more places. If this happens then the libraries will survive and the number of readers will steadily rise.

“I tell people they will have to make the effort to keep the libraries going. They have to take interest and do the work. I can at best provide advice and support.” A wonderful aim that is yielding positive results as some former volunteers come forward to express their views.

Impact on readers
Jeenamsi Ngadong was in standard 3 of the Kasturba School in Wakro but did not know how to read a single word in English until she met Uncle Moosa. “Samai (daughter in Mishmi language), why don’t you come to the library to read books?” he asked her and Jeenamsi began visiting the APNE Library regularly to look at funny pictures and laugh. However, by the time she was in class 5 she was reading fluently with Uncle Moosa’s support and wanted to read more and more.

“Uncle let me leaf through books without forcing me to read and this is what encouraged me. Thanks to his support, I’m reading books by Ruskin Bond and Uncle Seuss!” says Jeenamsi who is currently studying English in a college in Coimbatore.

Ashish Mishra and Abhinav Dwivedi, two good friends, had joined the Bamboosa Library in Tezu when they were just 10. Today, Ashish is studying Marine Engineering in Chennai and Abhinav is doing his MBBS in Kolkata. Both boys feel grateful for the time they spent in the library with Uncle Moosa.

“The library not only provided us with a platform to read good books but also to enact skits and feel confident to perform in front of an audience. We often accompanied Uncle Moosa on his reading campaigns and encouraged other children to read – an experience we will always cherish!” said Abhinav.

Beyond the hills
The Lohit Youth Library Network, initiated by Uncle Moosa a decade ago, is fostering ties of friendship and education amongst the Arunachali people, especially at a time when political instability, drug abuse, alcoholism, unemployment and tribal conflicts are affecting their society. Interestingly, this very movement which was quietly born in an inconspicuous corner of the northeast is now poised to take the ‘Joy of Reading’ campaign across the hills to other parts of the country. Thanks to this initiative, reading could finally become not just a pastime for youngsters but an essential part of their lives as well!

The author is a teacher, a teacher educator and writer of children’s stories and poems. She can be reached at deshmukh.nitu@gmail.com.