I hail from Goiliang, a remote village of the Miju Mishmi tribe in the upper regions of the Lohit valley in Arunachal Pradesh. I led a carefree life until I was 5 years old. There were no anganwadis or schools, so as children we had entire days to ourselves with our dogs, chasing piglets, birds and butterflies, and picking the odd wild fruit and flowers. Our parents too were busy farming on the hill-slopes and taking care of domestic animals – pigs, fowls, mithuns, and so on. We didn’t even have to bother with our dressing. We simply wore langotis in the typical tribal Mishmi style.

One day, an uncle visited my father and told him of a new residential school for tribal boys near Hayuliang, where education was free. Father immediately decided that I would join that school and told me that we would start the next day. For someone who had never been out of the village, this was exciting news. 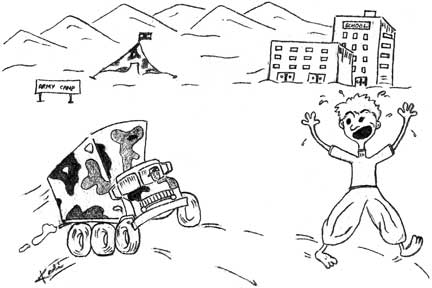 The next morning, uncle, father, and I started walking to Hayuliang, as there was no public transport available. I was in my langoti and my Mishmi coat. En route, my father stopped at a stream and gave me a thorough wash – we were going to school! At the town market, he bought me two pairs of shorts.

Just as we were reaching Hayuliang, I suddenly stopped to look at a large footprint on the muddy road. Something I’d never seen before. I asked what animal could make such a large footprint. “Its not an animal, it’s the tyre mark of a jeep,” Uncle remarked. Just as I was wondering what a jeep looked like, I was stunned by a huge roar and a terrible scream coming from behind me. A huge greenish black monster was roaring towards us! I fled to the edge of the road; my uncle laughed and said that it was an army truck and that it would do no harm. He then held my hand to reassure me till we reached the town. The next morning we walked to the school, which was about 10 kms from Hayuliang. For quite a few days, I remember I used to be struck with a sudden fright when I heard the screaming horn of the army trucks!

As we entered the school, I saw several men talking in a strange language. I was relieved to see that there were also about 30 young Mishmi boys standing in khaki shorts and blue t-shirts. As I talked to them, the older boys told me that we have to learn to speak in English and Hindi in the school. (Our language, Mishmi, has no script and all schools in Arunachal use English as the medium of instruction.) I soon settled down in my new school.

Our teachers taught us with a lot of patience (and some with impatience too..!), not just the academics but also the ways of life – washing ourselves, brushing our teeth, dressing up, and eating in organized groups. We also learnt to do exercises daily and play games. At nights, our teachers sat with us, under kerosene lamps, telling us stories of kings, animals, gods, and freedom fighters.

Today, my children, living with modern gadgets, cannot believe these stories. I owe a lot to my teachers, who in their young age, gave their best to build an educated society. I salute them.

The author, the first graduate from his village, works in the ICDS Department at Walong in Anajw District of Arunachal Pradesh.