As a mathematics teacher I have met many children who have had a peculiar dislike for the subject. These children have been the stars in my career because it was they who demanded a lot from me both professionally and personally. This article is about a student I met in my first year as a teacher; he made me realize the importance of emotions in our lives.

A teacher cannot only teach; she has to immerse herself fully into doing her ‘job’. So what was my job as a teacher? My job was to teach mathematics, which I did. But there was a child in my class who refused to play by the rules. He showed many signs of opposing authority; he disliked being told anything, even suggestions were not welcomed by him. There was one class in which Saurab (name changed) argued a lot about why he had been assessed wrongly in an exam. He argued at length even when he could not prove his point. I could see fear in his eyes and that was the day I decided I had to find out more about him.

Saurab was in class 5 when I first met him. He had big eyes that always seemed to be searching for something. During our conversation about how he had been marked wrongly, he said, “Your atrocities will create a hideous environment at my home and you must amend them.” These were the exact words he used! I was delighted to see the range of vocabulary for a class 5 child, but these words also revealed hidden anger. I waited for the monthly parent-teacher meeting. Saurab’s mother told me that she and her husband were ‘very worried’ about Saurab’s marks in his mathematics exam. She started fretting about how she had no hopes from a child who could not do mathematics in class 5. He was good with all the other subjects, the problem was with mathematics. I gathered that the child’s parents put a high value on mathematics. 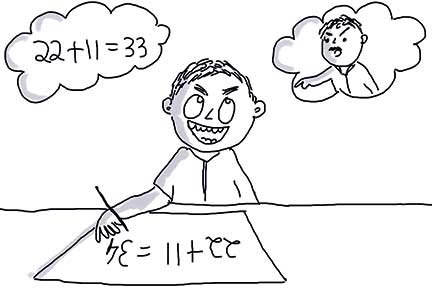 I was curious to know more about this child who was good in all the other subjects. I asked the English teacher, she told me that Saurab had the highest marks in the class in English. He had good vocabulary and speaking skills. He could formulate long complex sentences and he had read all the Harry Potter books. Wow! Then what was holding him back in mathematics? I asked the other teachers as well and they all had only good things to say. Saurab’s case got more and more mysterious.

Why was a very intelligent student struggling in mathematics? Mathematics disability was ruled out because he did not show any of the signs. His mistakes in the exams were haphazard. In the class he did fairly well but in the exams he made ‘careless’ mistakes. I felt that this child liked to show-off his mathematical skills in class. His responses to questions posed were quite assertive and I saw him correct other students many times as if he were an authority. All this made me feel that the child needed attention. I asked him casually if he would like to come for some remedial sessions after school hours. Saurab did not seem interested but he remarked, “Oh! You should ask my parents. They would really like this idea.” This statement reinforced my belief that the family’s orientations towards mathematics had some connection with Saurab’s situation.

I arranged a meeting with the parents; again the mother came alone. I requested her to send Saurab for extra classes after school hours. The mother was very happy as according to her Saurab ‘needed help’. When I started working with Saurab, I started with teaching him mathematics. I was surprised to see that Saurab interrupted me every time and completed my sentences with mathematical content. He was at par with the subject according to his class level. He talked to me like he was my teacher. Why then was Saurab not able to do well in mathematics exams? I realized that the child was always trying to find points of discussion outside of mathematics during our one hour remedial sessions. I had observed that he had a lot of interest in history, especially the Egyptian civilization. He said if he had it his way he would be an archaeologist. “What is happening?” I thought to myself. The child feels helpless in deciding a career for himself. Was someone or something pushing him?

I requested Saurab’s mother to meet me every week on Saturdays so that I could appraise her of her son’s progress on a regular basis. I told her everything about our sessions and how Saurab was doing very well. The mother told me that she knew Saurab knows the subject well enough but for some reason he wasn’t performing well in his math exam. She also told me that it was because of the marks that his father was always worried and upset with Saurabh. It was then that I asked, “Do you have any specific ambition for the child in your mind?” She said, “In our family everyone has to be a doctor or engineer and if a boy does not grow up to be one, it is a waste of time.” I now understood why the mother had said that she had ‘no hopes’ from Saurab because of his low marks in mathematics. I started having long conversations with Saurab after this meeting and his feelings are the reason I am writing this article today.

Saurab had a cracking sense of humour; he once compared the flapping wings of a butterfly to the nostrils of his father when he was angry. The child made the comparison with such little emotion that I felt sad about how far away he had gone. He told me that his father had a ‘crisp’ hand and that Saurab’s mathematics marks were enough to ‘topple his balance’. Again, those were his exact words. Saurab once confided in me that he felt so angry for being pushed about maths that he sometimes made mistakes deliberately to anger his father. I could now complete the picture; Saurab knew that his performance in mathematics mattered a lot to his parents and he used that to hurt them. He liked to see them disturbed. But why? Had the parents been doing something to him? Well these questions are never easy to answer, but I had found the lock and the key too. Now I had to ease the child’s situation for the sake of his innocence and future. 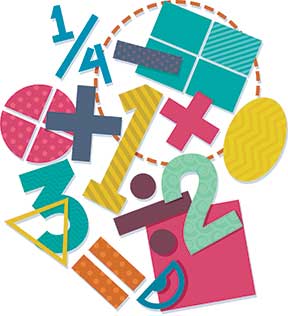 I began by talking to the mother, I shared with her everything and told her not to share these details with the child’s father. Thankfully, the mother was sensitive enough to understand the complexity of the situation. She said, “If he gets good marks, his father will be least bothered.” So I suggested that she hire a good home tutor as well and see to it that the child and the father did not discuss mathematics at home at least for some time. I wanted the child to have a home tutor so that a person could ‘take care’ of mathematics even when I was not the mathematics teacher for Saurab and in no case the father would be required to teach him. This helped a lot. Saurab stopped coming for remedial teaching and his mathematics marks improved substantially. During the next year I saw that his resistance in class had eased and I saw him busy in his own things, sometimes reading, sometimes talking and sometimes dreaming.

The emotions that Saurab experienced ranged from helplessness and inadequacy to revenge. This child was very vocal; he called attention to the problem by showing some signs but many children do not. The problem that he was facing was rooted in the ‘halo effect’ around the subject and ironically it manifested itself through his performance in mathematics. I have met several such students. The point I am trying to make is that due to the hierarchical structure of the subject, we find that it has the maximum number of casualties. Leaving out the learning disabled individuals in mathematics and languages, have we heard of people who cannot understand science, history, languages, etc.? A lot of pressure to perform in mathematics comes from the ‘high premium’ associated with the subject. People who can do mathematics are considered superior to those who cannot. Why? Maybe, because of the fact that mathematics finds utility in most higher education courses. But, in a world that has understood, adapted and implemented the concept of Multiple Intelligences, our obsession with mathematics for judging cognitive ability is highly uncalled for. Mathematical intelligence is just one among nine that we are said to have. A person can score well in school and college, earn and do well in life without higher mathematics. A more pressing argument I am trying to make is that we should help children realize that mathematics is all around us, we should leave scope for individual expression and allow them to experiment with mathematical ideas before we jump to formal abstract mathematics.

We humans have invented mathematics in order to make sense of the world. It is actually a cultural practice that requires people to be slowly inducted into while having many opportunities for failure and success. We as teachers and parents need to allow that space so that children feel welcome instead of feeling suffocated. Surely, our budding mathematicians can be helped to do a lot better mathematically.

The author is a Ph.D scholar with the University of Delhi. She has been a mathematics teacher and teacher educator for many years. She can be reached at poojakeshavan@yahoo.com.