It was one of those rare occasions when I was spending time with my horde of nieces and nephews – Koel, Parth, Pooria, Khoj and Nayantara – in number just five, but, God knows, that lot is a horde! I decided to occupy them with art and craft, and we began to fold sheets of paper to make ‘cameras’. The precocious five-year-old was the first to begin ‘clicking’ pictures…And then deciding that she had to show me the photographs too, she very quickly tore a page into small rectangles, and began to draw: she and her aunt, and then she and her mother, then her sibling, and even a ‘photo’ of her “whole fam-ly”, the little rectangle filled from end to end with figures! 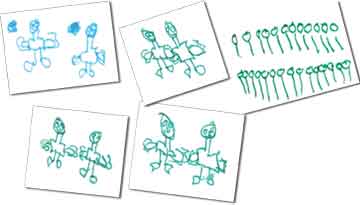 These pictures show, as you can see, not only her idea of family, but an understanding of the concept of number, as well as of space. There is the idea of herself with one other person (two), and then a whole group (many), and how size and shape is to be manipulated to fit a space. Here’s a series of ideas around the concept of “family” that one can use in different classrooms, at different levels.

The old order changeth…
In Nayantara’s conception of ‘family’ were included not only her own immediate family of parents and sibling, but the larger household consisting of the extended family of grandparents, uncles, aunts, cousins, and even friends. This extended or joint family is one that is rooted in our culture, although it is being slowly eroded in our times. Families once used to be large and rambling, with several generations of people living together in the same house. Sharing spaces and things was a way of life; the set-up made for a rubbing away of corners and offered a support network that gave one the strength to confront difficulties easily. Interdependence was the order of the day.

This of course meant that there was limited private space for the individual. Today’s families are smaller and rather more individualistic, especially in urban settings. This is reflected in the EVS books at primary school, where one is introduced to the concept of the family as a nuclear unit of parents and children, and perhaps, the child’s grandparents. The extended family is considered outdated, even in our textbooks.

The author is a freelance editor, writer and teacher trainer. She can be reached at [email protected].