When you are writing do you ever hesitate over using dependent or dependant? Do you write hoard when you mean horde? If you do then you are with much of the English-speaking world because these are among the most commonly misspelt and misunderstood words in the English language. The second book in Prof. Upendran’s series called Know your English Vol. 2 – Words Frequently Confused aims to list and explain errors such as these and many more.

It is heartening to see that the book contains illustrations that are relevant and easily understood in the Indian context. In the very first entry which explains the use of few, a few and quite a few Prof. Upendran chooses to use the idea of a bundh to make his point. Later on whilst bringing out the difference between blunder and faux pas he uses the example of walking into a puja room with shoes on. These are examples that are close to every Indian’s heart and that most Indians would understand quickly and easily.

The author’s wry sense of humour is evident in his explanation of the difference between a spare and a stepney and the Indian connotation attached to the word stepney. When he suggests at one point that the reader try telling his “significant other” that he likes her odour, one can almost hear him chuckling at the outcome. He points out that tiffin and timings are both Indian words that do not exist in the native British tongue. 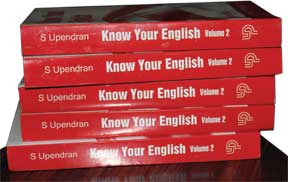 Indian speakers of English, particularly first generation learners, are generally at sea when confronted with the many differences that exist between British and American English. As a result many might vacillate between the two using one or the other. It is common to find one speaker of English use the word curd , curds, and yoghurt at different points in time without getting the subtle difference between the correct usage of the term curds, the use of the singular before a noun as in curd rice and of course the all-American yoghurt. Similarly, it is interesting to note the subtle difference between have to and must and the more American have got to. Whether one fills in a form or fills out a form depends on whether you are speaking British or American English, the author will have you know.

The book is also informative and useful as it covers the use of phrasal verbs in terms such as call at, call in, muddle along, muddle around, etc. Differences in spelling like centre and center are also dealt with.

Idiomatic phrases such as ‘to show someone the door’ are juxtaposed with the literal to show someone to the door. Subtle differences in pronunciation are explained in detail; etymology is touched upon where it is relevant and required. The distinction between the noun and verb in words such as prophecy and prophesy is clearly stated and explained. The author thoughtfully illustrates the use of the right salutation and ending in a formal letter thus covering a large portion of grammar and its common usage.

My favourite entries in the book are those that deal with newfangled words of more recent origin. The author brings into his compilation a wide variety of modern words in use, the more interesting ones being metrosexual, netizen, and fax potato. It is certainly an eye opener to note that the term father in laws is now accepted.

Know Your English certainly makes for an interesting read. Prof Upendran brings to this book not just his profound knowledge of the subject but also his understanding of the difficulties faced by the ordinary speaker of English in India. And he does this in inimitable style bringing lucidity to the hesitant speaker and writer of English.

The reviewer is a teacher in Vidyaranya school, Hyderabad. She can be reached at ninoojoe@yahoo.com.