An enthusiastic teacher shows how history can be brought home to students through a collaborative project that opens up boundaries, ideas, and imagination. 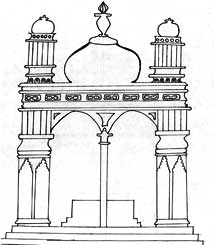 History wasn’t my major in college. Nor had I ever formally taught it at the high school level. Therefore, teaching history to Class 8 ICSE students threw up many unexpected challenges. True, some of them stemmed from my own ambitious designs. I had made an initial promise that I would strive to bring history alive for them in the class. Also, that if I were to ever paint any historical character all black or all white, they could cry a halt. What is more, I vowed to incorporate people’s history into the predominantly political history prescribed in the text. To add to the problem, “Anubhūti”, as the name suggests, is wedded to the ideal of “experiential” learning. Is it possible to “experientialize” the teaching of history, given the constraints of time and syllabus? How much of it would be too much?

That was indeed what prompted me to experiment with alternative ways of teaching – relying on “para” history, taking the help of period films, drawing heavily from poetry/painting and using theatre. But it was while discussing the arrival of Europeans in India that the idea of looking at the history of a city occurred to me. Can we study the history of an (representative) Indian city and try to extrapolate the larger Indian history of a certain period? I did not know of any precedent in this direction and hence was very apprehensive of its outcome.

This is perhaps the moment to share another concern as well, which has been weighing me down – democratization of the classroom. Do students get to have a say on the methods of learning? I, therefore, suggested to them that I had such a plan and that if they would agree to it in principle, we could thrash out the details. As expected, it was welcomed enthusiastically. Now, the question was – “which city?” Calicut to Arcot (!) and Kolkatta to Chennai figured in the suggestions. For logistic reasons, these choices were hard to accept. I had indeed shortlisted three cities – Pune, Aurangabad, and Surat. But unless thrown up from among the students, I had decided not to go in for any one of them. It was then that I heard the lone voice of Rishabh Baffna calling out “Surat”. I latched on to it! There were four students from Surat in the class and I had secretly hoped that they would jump at the proposition. But that was not to be; they were not really in favour. Still,Surat was voted in by a slender majority.

The author is a literary critic by profession and an aspirant teacher trying to integrate interdisciplinary knowledge and pedagogy. He can be reached at b.krishnakumar@jains.com.