The ‘neighbourhood criteria’ has environmental, economic and social ramifications

Admission to the nursery classes in most schools in Delhi has been a controversial issue. Added to this, the B K Ganguly Committee Report on nursery admissions has also caused a huge uproar. The committee was formed on the recommendation of the Delhi High Court to review a petition1 against interviewing parents at the time of admissions to nursery school. The private school fraternity and many parents are not happy about it. But there is at least one important point in the report which will make environmentalists/educationists happy. 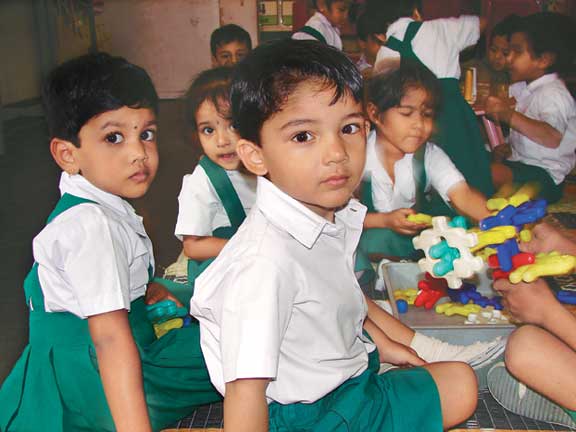 A section of the report has to do with a child’s residence near the school as a criterion for admission – ‘the neighbourhood criterion’. Initially, the report mentioned 3 km as the radius that the school should consider. After protests from parents and schools this radius was increased. Nevertheless, this condition makes a lot of sense, environmentally.

Every school invariably finds itself surrounded by vehicles both the school transport and private vehicles twice daily – when the school opens and when it closes. The reason – most students commuting to school use either the school bus or their private vehicles. With the ‘blue line fiasco’2, failure of public transport and increasing affluence among people, the number of parents dropping their kids to school has increased. The result is an increase in the number of traffic jams outside schools.

As transport planners have been saying, more people should use public transport. A bus can carry more passengers than a car and occupies less space. This means that there will be less traffic and congestion on the roads. Not bad advice at all! More children need to use public or school buses rather than create traffic jams by using their own cars.

But this is not merely a traffic problem. A study by the Central Institute of Road Transport, Pune, finds that a car consumes nearly six times more energy per passenger per km than an average bus. Hence, public transport makes sense even from the point of view of saving fuel.

These days children travel enormous distances to reach their schools and get back home. Not only does the fuel spent impact the environment through emissions, there are many limitations unaccounted for. The time taken to travel eats into a child’s time to play. The child when he comes back home only has enough time to finish homework. This is stressful and has a negative impact on the child in general. And this is where the Ganguly committee’s suggestion will hold good.

If only those children staying close to the school are given admission, perhaps most children would walk/cycle to school and there would be no need for any other vehicle. The children would also have enough time to play. Even the Delhi Transportation Corporation buses used to ferry children can be used by those who need them more. Thus, the ‘neighbourhood criteria’ of admission to school makes a lot of sense.

There have been questions asked like “What will I do if there is no good school in my neighbourhood? I want good education for my kids.” There is only one answer to such questions. A school is made by its students. So, if good students (your children) study in the neighbourhood school, the school will automatically become good.

The Ganguly Committee’s recommendation of the neighbourhood criterion might initially be a bitter pill. There may be problems for some time. But this pill will surely cure the city of unwanted traffic and emissions.

The Ganguly committee had assigned 20 points to ‘neighbourhood criteria’ in its 100 point formula. The Delhi government rejected the 100 point formula and asked the schools to develop their own weightages for each criteria like neighbourhood, sibling, alumni, etc. It’s up to the school to give it a value of 10, 20 or 30.

As we sweat it out in the age of global warming and climate change, the ball is clearly in the schools’ court to take a decision, whether they want to value this important factor or not – not only in Delhi but across India and the world. It’s high time that schools realise the environmental, economic and social ramifications of the ‘neighbourhood criteria’.
__________________________________________________________________________________
1. The petition was put forth by an NGO called Social Jurist and in particular Mr Ashok Agarwal, a prominent lawyer. The court issued a directive to stop interviews of parents during school admission and made a committee under the chairmanship of Mr BK Ganguly, then chariman CBSE Board to make guidelines for nursery admissions. It turned out that some of the guidelines forwarded by the Committee didn’t suit people.
2. The public buses in Delhi operated by private individuals are called Blue Line buses referring to the colour of the buses. Blue line fiasco refers to the increase in the number of pedestrians killed by these buses in accidents – rash driving by private drivers.

The author is a development professional working on issues of education for sustainable development with Educomp, New Delhi. He can be reached at smusafir@gmail.com.