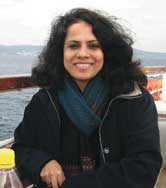 Once when author Anushka Ravishankar was travelling by train, a young man sharing the compartment was curious about what she did for a living. “I write for children,” she said. Surprised at this, the young man blurted, “Oh, textbooks!” No, she said. “Storybooks?” No, not quite there yet. “I write nonsense,” she told him. The puzzled look on the young man’s face is worth imagining.

The author of much-adored books like Catch That Crocodile!, Tiger On A Tree, Today Is My Day, Wish You Were Here, and many others, likes to write “books that kids can just have fun with, play with.” I met Anushka in November 2010 at Damroo!, a workshop for creating content for children, hosted by the Industrial Design Centre at IIT Bombay. Her approach comes like a breath of fresh air in a scenario where parents are either trying to dissuade their children from looking beyond their textbooks or stuffing their children with moral tales that hope to fortify their young souls against the big bad world. “Books that start off with educational intent tend to be less exciting for children. I tend to react strongly against didactic books for children. Their purpose is to simply inform or improve the child, not to let him or her simply enjoy reading. Fun books aren’t necessarily irresponsible. They too have a world view,” she remarks.

I am reminded of another storyteller, another train journey, another man. HH Munro’s short story, The Storyteller, is set in a railway carriage occupied by three children, their aunt, and a bachelor who is travelling alone. In order to keep the children from making noise, the aunt tells them a story about a little girl who was good, was liked by everyone because she was good, and was rescued from a mad bull by a number of people who admired her moral character. At this point, one of the children suspects that the people would have saved the girl even if she hadn’t been good. The aunt offers an unconvincing reply saying that the rescuers wouldn’t have run as fast to help the girl if they hadn’t liked her a lot. The children are little inclined to buy this; they find the story absolutely stupid.

At this point, the bachelor begins telling a story hoping to keep the children engaged. This one is about a little girl called Bertha, who was “extraordinarily good.” Allergic to the very mention of goodness, the children begin to lose interest, suspecting another variant of their aunt’s tale. Munro tells us that there is “a wave of reaction” when he speaks of Bertha as “horribly good.” The children find this oddly surprising, but they are hooked. Bertha is awarded medals for obedience, punctuality, and good behaviour – and the privilege to walk in the Prince’s park, which is out of bounds for other children. The park is infested with pigs that have eaten up all the flowers in the garden. One day, a wolf comes to the park to see if it can catch a pig or two. Bertha scampers for her life, and finds shelter among a few bushes. In her moment of fear, she says, “If I had not been so extraordinarily good I should have been safe in the town at this moment.” With all the anxious trembling, her medals clink against one another, and the wolf dashes into the bush, drags her out and gobbles her up. We are told that “All that was left of her were her shoes, bits of clothing, and the three medals for goodness.”

All our ideas about children as sweet, innocent angels are shattered. The children listening to the story are thrilled; they even call it beautiful. The aunt, like many adults, who want to protect children from violence and expose them only to models of virtue, is shocked. She yells at the bachelor, “A most improper story to tell young children! You have undermined the effect of years of careful teaching.” He, of course, is rather smug. “At any rate,” he says, picking up his things before leaving the carriage, “I kept them quiet for ten minutes, which was more than you were able to do.”

I wonder what Anushka thinks of Munro’s story, but it is clear here that what children are excited by is not necessarily congruent with adult perceptions about what is good for them; what they must read, watch or be exposed to. This is not to say that we must give up the idea of sharing stories that we feel our children could learn from; rather we should perhaps begin to wear our anxieties a bit lightly. If something is imposed, there’s bound to be resistance.

“Sometimes when I visit schools, I ask children how many of them don’t like to read. Many of them say that it’s because the books at home are all picked up by their parents, and they find those books boring. They don’t have a choice in what they read. Also, I think some children will never love books, and that’s okay. They can go play in the park, or do something else that they enjoy,” she says.

There’s too much pressure on children. Even in the case of parents who encourage their children to read, there is often an impulse to push them into reading seemingly more complex books; for instance, to move beyond picture books, and to read ‘real’ books packed with text. Says Anushka “Children relate to pictures in a very different way than adults. For many adults, the concern is how to keep them occupied instead of thinking about what the children will engage with and enjoy.” So how does she manage to figure out what a child will enjoy? “I don’t think of a reader out there. You have to tap into the child in yourself and write for that.”

The author works with the Kabir Project, Bangalore, and runs an online group called People in Education. He may be reached at chintan.backups@gmail.com.