My fascination with fairy tales began from the time I learnt to read. Having spent many hours as a child in the company of such delightful characters, I was completely besotted with this world of magic and miracles and dreamt of having a fairy godmother of my own. Gradually, as I grew up, I started dipping into other genres of fiction, but the allure of the fairy world remained with me.

On completing my post graduation in English, an army school offered me the job of a teacher, but the idea did not appeal much to me. With such a vast spectrum of careers to choose from, I thought I could be something different. So I coaxed myself into accepting this job till the time I found something more exciting.inflatable birthday cake for sale

The plunge that I had reluctantly made went on to become a full-time profession. I moved on to teaching in a prestigious public school, enjoying the opportunity and power to influence and inspire a future generation. I have to admit that the seven years I spent teaching has proved to be an amazing voyage of discoveries. In the company of children, I discovered how a mundane day could be celebrated with a smile, how simple things in life could be turned into seeds of daily joy, and the essence of love that comes straight from the little hearts with no strings attached. 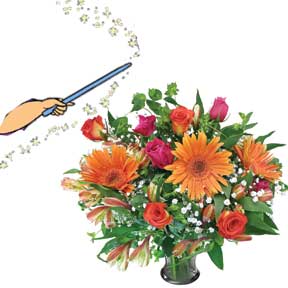 With time, I also discovered that teaching was no bed of roses. My little angels could turn into little devils in no time, seeming to delight in making my life a living hell. If offered an inch, they would seize a mile. It was here, in the classroom that those vivid memories of fairytales came tumbling back. When temper tantrums were on the rise, I wished I could implore Beauty to come down the steps of the Beast’s castle and kiss these naughty little brats so that they turned into compliant students. When the impulsive lot intruded upon a lesson with irrelevant questions, I wished I could thrust them into the rabbit hole that Alice went down, so that they could unlock all their curiosities in Wonderland. When two students were caught in a nasty squabble, each blaming the other with equal innocence, I longed for the Pinocchio miracle to happen, and the culprit’s nose to turn long and give him away. When the class resembled a bedlam, I yearned to summon the fairy godmother so that she could turn a rotund pumpkin into a magical coach, in which I could make hasty escape to whenever I willed. The most trying task was to select the best student in class at the end of every year for the customary awards. How does one choose the most beautiful star when one knows that each has lent its glory whole-heartedly, to make the night sky the spectacle that it is! I truly wished I could steal the magical mirror from SnowWhite’s stepmother and ask it, “Mirror mirror on the wall, who is the best student of all?”

These were the sweet challenges, I faced from day to day and learned to tackle. Teaching, indeed, seemed to be my true calling.

Then a year ago, I began experiencing major problems with my vocal cords. I struggled to complete my lessons. There was a noticeable loss in the volume and pitch of my voice and the students at the back would complain that I wasn’t audible enough. Medicines and herbal concoctions helped me carry on for a few more months. Finally, on the doctor’s advice, I was forced to quit my job. But, by now I realized that teaching was something that I wanted to do. So I opened a communication centre for kids. I decided to have small groups, keeping my voice constraints in mind. It felt good to be back in the company of kids. Days and months passed, till it was time to usher in another birthday. I couldn’t help looking into the rear view mirror for a quick introspection on the course my life had taken. Was I living in the shadows of who I could really be? Did I need to redefine my dreams and goals? With these nagging thoughts in mind, I proceeded for a morning session with the kids. As I was busy teaching, I heard a familiar voice asking for ‘Shweta Ma’am’. Instantly, I peeped out of the class. To my joyous disbelief, I found Sonakshi standing there with the most heart-warming bouquet in her hands, to wish me. Sonakshi Agarwal was an old student of mine. I had been her class teacher as well as the English teacher, in grade 6, before I quit school. She was an outstanding performer, very graceful and respectful, and was involved in a number of school activities.

I thanked her for the bouquet and told her that she had made my day. Somewhere I knew, she had also made my years to come. This little girl had restored my faith in what I was doing. She left me with plenty to think about and enough to look forward to. I had never imagined that in today’s times, when children, after school hours, prefer to remain immersed in the virtual world of social networking, one of them would actually invest their efforts in coming to meet their teacher. It made all the difference.

The bouquet of miracles sat pretty on my study table for a long time reminding me how lucky I was to be a teacher! It still sits pretty in my heart whispering into my ears that miracles don’t need sparkling fairies, wicked witches, lumpy bumpy pumpkins, or magical mirrors. They just need to be unravelled in the most simple and warm gestures of love and kindness.

The author runs ‘Spell & Sparkle’, English Language Centre for children in Ahmedabad. She can be reached at shwetawrite@yahoo.com.