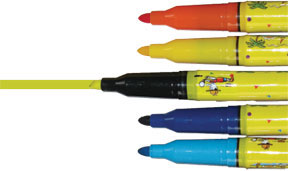 His life comprised mostly of begging in long distance trains until one day he arrived at the shelter home for boys at Jabalpur. What distinguished him from the rest of the boys was his pronounced stuttering and the resultant reluctance to talk about his experiences in the group. My ‘icebreaker’ moment with him happened with very few words, amid paper, colours and pencils. During a workshop that I was conducting, I had asked all the children to visualize a place of safety and then depict it on paper. He chose fluorescent green as the dominant colour in the drawing of a “safe space” he visualized for himself. The human figure he called gudda (doll) and the house he drew, gudde ka ghar, were coloured in bright green with a spattering of other colours.

Having completed his task he got up to hand over his pencil and eraser saying, “This has to be returned”. I asked him to deposit it with the staff in charge. After a few minutes he approached me once more seeking permission to go to the toilet. I nodded in between my conversations with another child not noticing that he was clutching the fluorescent green felt pen even as he left the room to go to the toilet. I called out to him to him to leave the pen behind as there was no need to carry it to the toilet. He did not stop on hearing me call out to him. On the contrary I noticed him scurry away. And then it struck me!

He wanted to “safeguard” his fluorescent felt pen. Considering it was a colour that had caught his fancy, he wanted to ensure that it did not fall into the hands of the other 19 kids. Everything at the shelter for the boys is shared and there is naturally a tendency to hoard, to protect and to ensure one gets the maximum of what is available. No wonder he did not return the felt pen to the staff when he gave back the eraser and pencil. He wanted to go to the toilet, but he knew he could not leave the felt pen lying around for fear of not fi nding it there again. On returning from the toilet, he picked up his drawing and continued filling it in with the colour.

Later, when I asked the kids to to draw a scene from the railway platform, this boy seemed to be at a loss. He sat with a blank page which he fi nally brought to me. He said, “I cannot do it”. I remembered a simple and easy thought put forth by Devi Prasad in his book, Art, the basis of Education. In the book, the author had stressed on the merits of an easy conversation with the child about what he or she might want to see, can see, could possibly draw and how this could act as a diving board, for a child, from which to dive into a sea of ideas and imaginations especially when he or she is feeling a tad stuck. I volunteered to draw a simple train coach for him! He observed and imitated drawing three more bogies and connecting all of them to form a train. I then drew the first two lines of a railway track and he finished the rest. After this he volunteered to draw signboards on the platform that read “Jabalpur”. From saying “I cannot do it”, to fi nally, triumphantly, displaying his “platform” drawing to his friends, someone had certainly come a long way!

Smiling with him through this process of creation, watching his imagination materialize on paper and being witness to his small yet signifi cant triumph was a cherished moment, one that led me to experience expressions of the less prosaic kind.

The author paints, dances, experiments with puppets and shares stories with adults and children to create spaces of healing and resilience. She is a trainer/facilitator with Railway Children, a UK based NGO working with street children. She can be reached at jamunashukla@gmail.com. or visit her blog www.artyeast.blogspot.com.