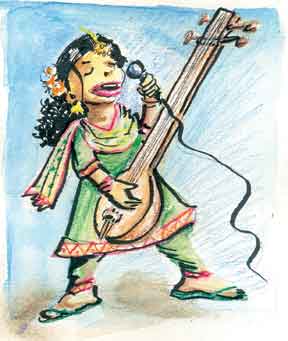 I began using songs in the English language classroom over twenty years ago, and I have found them useful not only in teaching the four skills of language – reading, writing, speaking and listening – but also grammar; a subject that is often loathed by both students and teachers alike! I must confess that the idea of using songs was not something that suddenly dawned on me. Though as a child growing up, I did learn a lot of English by listening to songs, I never considered using them as a tool that could be used in the classroom. My curiosity was aroused when I came across a few articles advocating the use of songs. The articles seemed to suggest that songs were a fun way of learning English, and that students, whether they were adults or children, always welcomed them with a great deal of enthusiasm.

The first time I used songs was when the university I was working in ran a proficiency level course for students who had completed their Bachelor’s degree and who desired to hone their communication skills. The 30 or so students who had been admitted to the “Certificate of Proficiency in Oral Communication” course were a mixed lot – some whose medium of instruction in school and college had been English, and others who had been taught through the medium of English only when they had joined the undergraduate programme.

Armed with the ideas that I had gathered from the various articles I had read, I selected a song, which I thought the students would like (Air Supply’s “Every Woman in the World”) and stepped into the classroom. The articles that I had read were unanimous in their opinion that students generally welcomed songs with unbridled enthusiasm. What I had failed to take into account was the fact that the authors of these articles were all teaching English in Europe. I hadn’t come across any article written by someone who was teaching in a Third World country. Perhaps if I had, I would have been prepared for the ‘shock and awe’ that the students had in store for me.