I did not choose to write historical fiction, the children made me do it. It all began at a workshop for 12 year-old kids, where on an inexplicable whim, I asked them about the subjects they hated the most in school. 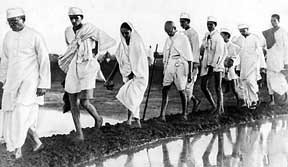 Hindi got the maximum votes, something I completely empathized with as I had spent my school years weeping over the poetry of Tulsidas and Mahadevi Verma. Then came maths at number two, and again I knew very well that sinking feeling I used to get staring at a maths equation that read pure Greek to me. However, the third choice surprised me, as more than half the hands shot and they voted in history.

I fell in love with history the moment my sixth grade teacher told us the stories of Mohenjodaro, of Alexander fighting Porus, and Ashoka finding religion. After all, history is about kings and queens, voyages of discovery, conspiracies, betrayals, and such surprising things as an old man who walked four hundred miles to make salt and started a revolution. It is about people and their lives and there is the word ‘story’ in history. How can that be boring?

Once I had taken a look at their textbooks I got the picture. Our textbooks take away every bit of colour and life from the subject and they are written in such a humourless, solemn and pedantic style, that even the most enthusiastic and imaginative teacher will struggle to make it interesting. Plus, the length of the syllabus is so huge that just to cover it all becomes a battle. I really don’t know why children between classes six and eight have to absorb so much history. At a time when they are still struggling to understand concepts like democracy or revolution, does a 12-year-old really need to know the details of the Minto-Morley Act or Akbar’s mansabdari system? The problem I discovered was that our textbooks are written by historians who have forgotten their childhood, do not know how to communicate with the young and are not in touch with children.

The author writes on history, travel and mythology. She enjoys making the past come alive through her historical fiction and also writing mysteries and comic books. She can be reached at subhadrasg@gmail.com.