Melania Trump recently made a gift of some treasured children’s books – a set of 10 classic Dr. Suess books – to various schools across America. The First Lady of the United States, making the gift on the occasion of US National Read-a-Book Day, has said she constantly reads the Dr Suess books with her son. One of the schools rejected the gift saying the books were “steeped in racist propaganda, caricatures, and harmful stereotypes”. This is one more example of the clash of the old and new world orders, a growing culture of re-examining what has traditionally been imparted to children in the name of culture, through the medium of children’s literature. As a corollary to this, I would like to add an anecdote from my personal life. Last year, I got into my first ‘intergenerational’ ‘intercultural’ debate with my eight year-old-daughter. It was Diwali. She wanted to celebrate Halloween. I couldn’t even begin to comprehend how such an alien festival and alien premise had any relevance to our lives and our way of living. Her response was simple: Halloween sounded like more fun than Diwali. Besides, the stores had more fun merchandise for Halloween – masks, devil-horn hairbands, witches’ capes. And what did Diwali have to offer? The same old colourful ‘ethnic’ clothes and ghee soaked sweets with the addition of small lamps. Same old, same old. As in five thousand years old, I wanted to hammer into her head. And realized I would only distance her further with the insistence on sticking to ‘our culture.’

Which one of us has not had our first taste of Indian culture through the medium of Amar Chitra Kathas? These books have single-handedly carried the responsibility of imparting a sense of their age-old culture into Indian children for several decades now. And yet, have they been able to withstand the test of time? Like the school that rejected the beloved Dr Suess books in America, if we were to test our Amar Chitra Kathas for their sensitivity to gender, caste and other traditional forms of oppression in society and their adaptability to a more globalized scenario, I think we would wonder whether they are in fact right for our children to be exposed to. This conflict begs two questions that I would like to explore here: (1) what is the definition of culture that we want to impart to our children and (2) how can children’s literature be utilized to bear this burden?

What is ‘culture’?
One simple and rounded definition of culture that I found is this: Culture is the characteristics and knowledge of a particular group of people, encompassing language, religion, cuisine, social habits, music and arts.1 To us in India, it is represented by a rich tapestry of epics, folklore and customs too. As much as there are differences in the rituals and observations as well as language, dressing, food and festivals in different parts of India, there is an underlying common strain that we identify as ‘Indian culture’ which we are innately proud of and wish to pass on to our future generations too. So where did my impressionable young child (and many others like her, I realized from talking to my peer group) get the idea that Halloween was ‘more fun’? The media she is exposed to – children’s movies and animation videos like Dora which have taken over childhood across the globe. How do we get children to realize that what is ‘fun’ is not always the best reason for it to be adopted and that at some level we need to have an understanding of our own roots wherever in the world our future might lie? The simple answer is: books. The only way to counter the dominant global culture is to expose children to the merits of their own through the time-tested device of reading. So is children’s literature in India up to the task of taking up this responsibility? That is what I would like to dwell on next.

The challenges of children’s literature in India
An article in The Hindu that appeared in 2013 has this to say about the state of children’s literature in India: “When Gandhiji was asked what he thought of Western civilization he replied that it would be a good idea. Children’s Literature in India would be a good idea too.”2 The article goes on to say that in a list of ‘Top 1000’ bestseller books in India, compiled in the year 2012, the first children’s book by an Indian author finds its place at 121 (Swamy and Friends by RK Narayan, first published in 1935). There are less than 20 children’s books in the list and none written by an Indian author in the last decade. The top entry for a children’s book is a Harry Potter volume that comes in at number 23. Popular choices for children include The Diary of a Wimpy Kid and the Geronimo Stilton series.

My first experience of reading was through Enid Blyton. Except for the Amar Chitra Katha series, my entire childhood imagination was consumed by Nancy Drew, the Hardy Boys, Asterix, Tin Tin, William and then on to Sidney Sheldon and Harold Robbins before I actually discovered ‘literature’ in college. These exposed me and my generation to the customs, mores and most interestingly, food – who did not want to try scones and ginger ale after reading Enid Blyton? – of different cultures around the world and taught us to understand and appreciate the differences and diversity of culture as a concept. But those were days when these were still ‘foreign’ enough for us to know that it was not ‘our culture’ and we still acknowledged Onam and Diwali as being ‘fun’ enough for us. So is children’s literature, whether Indian or otherwise, really capable of shouldering the responsibility of taking ‘culture’ through to the next generation? This is where school and teachers come into play. 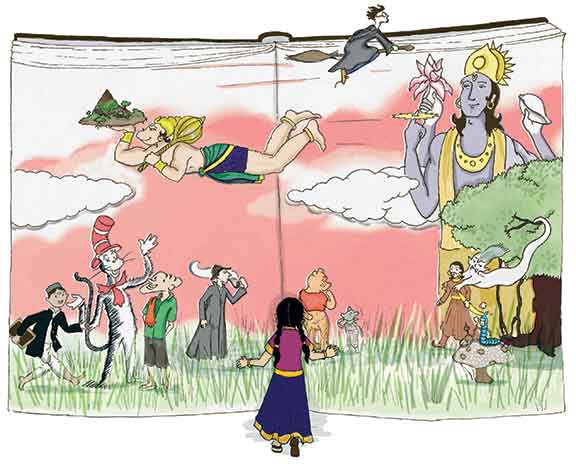 The role of teachers in moulding children’s attitudes through reading
All schools have compulsory library periods in the timetable, where children are issued standard ‘children’s books’ which they read as a matter of routine. I once returned a copy of ‘Little Red Riding Hood’ that was issued to my kindergartener because I found the illustrations too graphic and violent for her age. The teacher agreed, thanked me for pointing it out and assured me the book would be removed from the kindergarten section.

I think it is the need of the hour that teachers be more involved with what exactly their students are reading and take an active role in teaching them to ‘read and evaluate critically’ the books in their hands. The Washington Post pointed out that the US librarian, instead of refusing the First Lady’s gift, could have added those tomes to her collection so her wards have a wider variety of viewpoints to read and understand and then arrive at their own viewpoints on the world around them.3 The role of teachers would lie in providing students with context to what they read – show them how to look further; read in between and above the lines and to understand how to look for the good, the bad and the ugly in them. And on the question of culture, teach them to appreciate and respect cultural diversity without disowning one’s own.

Early one morning, as we were waiting for the school bus, an elderly gentleman in white robes and a prayer cap, holding prayer beads, walked past us. My daughter, having never seen such an attire before, asked me who he was (meaning of course, ‘why does he look so different from the people we usually encounter). I told her that he was a Muslim gentleman, on his way to morning prayer. “How can you say that, Amma?”, my daughter asked with eyes widened in shock. “You always say we should not differentiate between people based on religion.” “But would it have made sense if I just said he was an elderly gentleman? You can see that for yourself. Your curiosity is about the way he is dressed and that cannot be explained without explaining that he is Muslim,” I told her. There is a difference between being neutral to religion, accepting of it, and being ignorant of it. Same as there is between avoiding unpleasant connotations in a book by keeping them out of libraries and teaching children to confront them, understand and deal with them. Knowing the context, understanding differences, respecting what ought to be respected and rejecting what needs to go. Reading necessarily has to incorporate these steps at a young age and it falls upon teachers to make sure their wards get it right.

Conclusion
I don’t know when an Indian author is going to make ‘Diwali’ sound as fun as Halloween. But I am happy enough to have my children try out everything that sounds appealing to them so long as they have their feet on the ground and their identities in their hearts. Let them roam in the mountains with Heidi or board the Hogwarts Express for a magical ride. So long as I know they have Malgudi in their spirits and laddoos in their heart.

The author is an ex-lawyer, ex-media professional, and currently full-time mother and part time freelance writer. She has a blog, https://www.facebook.com/anjananayar.blog/, on which she comments about issues that she feels strongly about or thinks could be worthy of a conversation and children tend to figure hugely in her writing. She can be reached at [email protected].