Growing up, most of us probably shared a love-hate relationship with our school uniforms. While we loved the comfortable anonymity they provided, we perhaps also had moments when we resented them for not showing who we truly felt we were. Then again, there is that sense of ‘school pride’ that wearing the uniform carries, so that the act of wearing one’s school uniform gets charged with emotions of loyalty and pride. The battle of the uniforms between schools, though not an open one, is often an underlying discourse among students and teachers (and I believe more so now than before) where which school uniform is ‘smarter’ or ‘cooler’ becomes something that reflects the status or the nature of the school itself. So the skirt and top is ‘cooler’ than the salwar kameez or sari and so on. 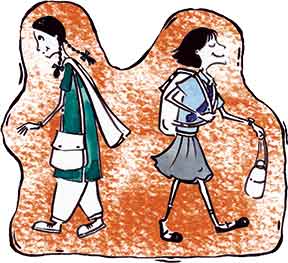 What often has gotten lost or rather ignored is attention to how gendered school uniforms have been and still are, and how despite there being so much discussion and awareness regarding gender issues nowadays, school uniforms somehow get past the gender scanner. Skirts for girls have become such an intrinsic part of the popular imagination of how we think about girls in school that the sexualized nature of the garment gets missed in the process.

But the problem is not necessarily with short skirts per se. Of course, there is the argument of why shouldn’t girls wear skirts? What is wrong with showing legs? There is nothing wrong with it, but the question is, why is there a lack of choice in the matter? Why do most schools, irrespective of whether they are located in rural India or urban, have shirts and skirts as the default uniform for girls? One reason is of course that it is aspirational; it indicates that the school is more ‘westernized’ and ‘modern’. Unfortunately, the salwar kameez schools have come to be associated with the opposite – regression and backwardness. This common stereotyping needs also some deeper investigation, but that is a separate discussion.

But what are the other reasons? Why are boys’ sports uniforms comfortable pants or shorts, while girls get the burden of ensuring their skirts don’t go flying in the air? Why are girls’ uniforms more revealing than those of boys? That too, in a country where exposure of the female body has traditionally been a matter of censure and shame? One sees the same phenomenon in sports as well. Donna Lopiano, director of the US-based Women’s Sports Foundation, asks: “Why aren’t male athletes stuffed into tight-fitting uniforms that display their genitalia as a way to get more women to watch?” since women in sports are mostly subjected to wearing shorts which are significantly shorter than men’s shorts and don’t really seem as comfortable. It’s a valid and important question to be asked. 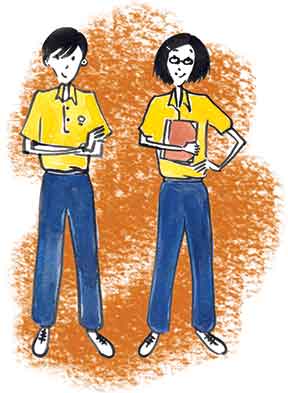 In the US, the Title IX – a federal law was passed to prevent any form of gender discrimination in various aspects of education so at least a space has been created and questions are being asked. We also need to stop and ask questions regarding the hidden curriculum behind making girls wear skirts and boys wear pants when otherwise schools and the popular societal discourse emphasize the equality of the sexes. One of the explicit aims of education is to instill a sense of equality between boys and girls. If the aim of education is to transform society and make it more fair, just, and equitable, a meaningful way of doing this would be to have the same uniforms for both boys and girls. A Mumbai-based alternative school in fact has tried doing so: there is a common uniform for both boys and girls – T-shirts and track-pants; a rare instance where comfort and equality are prioritized, and the school has chosen to not follow suit blindly. The result of this, the principal said, was that there seemed to be a lower rate of sexual incidents between students compared to what other schools reported, because she felt that students were able to relate to each other more as individuals and less on the basis of their sexual/gender identities.

The school uniform is very much part of the hidden curriculum in education. The ‘hidden curriculum’ “… is a side effect of an education, “(lessons) which are learned but not openly intended” such as the transmission of norms, values, and beliefs conveyed in the classroom and the social environment*”. What uniforms do is to reinforce traditional gender roles. In the case of skirts perhaps it is to ensure that free bodily movement of girls is limited and restricted. Another point is that girls and boys become more conscious of their sexual identities, which again is not a wrong thing at all – but the fact that there is no choice in the matter for them is certainly a problem. 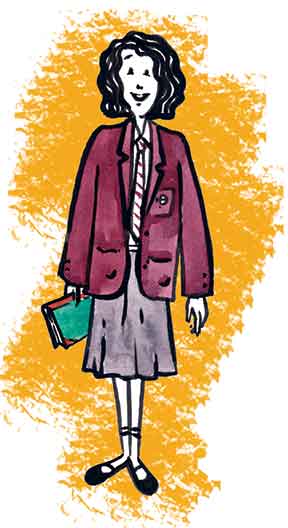 The freedom of choice and expression when it comes to gender, sexuality and sexual orientation are largely taboo in India. And one of the major control mechanisms is the school space, and here the uniform also plays an extremely important role. A lot of sexual repression takes place in Indian society, and the school has become one of the instruments for such control and regulation. So while on the one hand, schools that have uniforms do help mask class differences between students to a certain extent, the issue of students’ sexuality is not engaged with at all. In fact perhaps the mere thought that students are sexual beings can be highly uncomfortable for most teachers and school authorities.

On a more radical note: gender is performance, as the feminist scholar Judith Butler put it. When it comes to school uniforms, it is mostly larger society which writes the script for students and asks them to perform traditional gender roles which stem from a patriarchal conceptualization of society and the roles of the two genders. What is needed is more freedom for individuals to choose their own gender roles. So ideally, there needs to be more choice, more options for students to be able to express who they are, and not live in the fear of being judged or punished for their choices. This is desirable if we wish to create a world where people are not repressed and unhappy.

While there are no easy answers, people in education and teachers in particular need to start engaging with the questions that pertain to equality, fairness, and freedom. Henry Giroux, the American philosopher, wished for teachers to be “public intellectuals”. As actors in society who have the power to make a difference, teachers and educators need to question their own socialization and get out of their comfort zones. So even if school authorities are not amenable to progressive ideas, it is ultimately in the hands of the teachers to decide how they would like to use the curriculum – hidden or otherwise. Teachers have a choice – either to conform and maintain the status quo, or to be subversive and try to facilitate dialogue, inquiry, and questioning around things that seem to not matter on the surface, but actually perhaps matter the most.

The author has a masters in English Literature from Jadavpur University and a masters in education from TISS, Mumbai. She is the co-founder of T for Teacher, a non-profit aimed at improving the status of teachers in India. She is currently on a Fulbright fellowship teaching Hindi at Stanford University, USA and studying education. She can be reached at [email protected].