My mother and father have always said that I began to sing the day I began to speak! They feel that I have been responsive to music, something I can feel to this day, because nothing can move me as much as music can. As a baby, I would squeal to Brahms Hungarian Dance and dance at the sound of music, or cry when my mother sang or played a touching song…. My violin responds to me the most when I am playing to overcome unhappiness, or when I am happy beyond any other form of expression. As Aldous Huxley said – “After silence, that which comes nearest to expressing the inexpressible is music.”

Music runs in the family. My grandparents are natural musicians who would teach their children music as a daily ritual. My mother used to play the sitar and my uncle’s family is one of Hindustani Classical violinists. 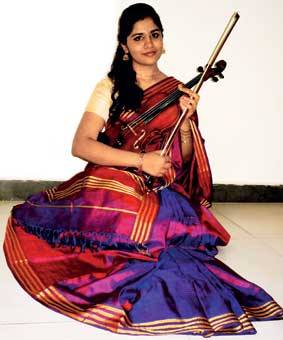 I began learning the violin when I was 7 years old, 2 years after my elder sister Preeti began to play the piano. I was recognized as a natural talent and there was no looking back. My first teacher was Sanjay Samuel. His uncle John Marthand began teaching me shortly after and every Sunday, we would meet at his music school for an enjoyable afternoon of orchestral music, accompanied by my father each time! I have now resumed playing with his orchestra and would like to help in his endeavours to improve and increase the musical knowledge of talented musicians in the city. I also learnt Hindustani Classical vocal music for 3 years and Carnatic violin and vocal music for a year. My focus has always been on Western Classical violin. I love the sound of the violin and the vibrations it produces. It spreads countless emotions with the touch of the bow.

I appeared for music examinations of the Trinity College of Music, London the year I began learning the instrument. My debut concert was at the age of 11. Since the age of 12, I have not had a formal teacher. I am very fortunate to have had extremely supportive parents who encouraged me against all odds, put in all efforts to see that I improved, took great interest in the smallest initiative and ensured that I took my musical talent forward. At the age of 12, with my mother supervising and guiding me through each rigorous practice session, and with my sister mentoring me with the technique and musicality involved, I gave the Grade 8 exam, accompanied by my sister Preeti Gopal on the piano. Since then, my parents kept my talent alive by encouraging me to participate in the annual World Music Day concerts, Christmas and Easter concerts in various churches, and home concerts. All my friends in the music fraternity have been kind and supportive, especially Commodore TMJ Champion, Dr. Cecil Naveen Elias, Mr. Henri Jagannathan. I recently studied with Jini Dinshaw, the founder of the Bombay Chamber Orchestra, in Mumbai and performed with the BCO for the 200th birth anniversary of Chopin in August 2010. This was a great orchestral experience that has, in a special way, launched my musical career through sheer experience. Learning music is something that will continue, because each day you interpret and understand music with more maturity, find a new colour emerging from the notations, discover something more about yourself and play with a newfound emotion.

The India Youth Orchestra was formed in January 2011 with musicians from Bangalore, Hyderabad, Kolkata, Delhi, Goa, Trivandrum, Sivakasi, Coimbatore, Ooty, and Nagaland. It is a string orchestra comprising of violin, viola, cello, and double bass. Mag. Vijay Upadhyaya, our conductor from Vienna, held auditions in major cities to look for the talent that he would train under the guidance of professors from Austria. Vijay Upadhyaya took this initiative to expose us to Western orchestral repertoire and to uplift our talents through individual training with emphasis on technical and musical improvement.

It was in September 2010 that I was informed of auditions for the India Youth Orchestra… a dream come true! I couldn’t think of anything but our first concert, which was still a distant dream considering that the auditions were four months away! India has musical orchestras and groups of musicians but something on a national scale being organized by Vijay Upadhyaya, a world-renowned conductor, was an opportunity I did not want to miss. I registered immediately and prepared the given music for the auditions to the best of my ability, eagerly looking forward to 29th January 2011 in Bangalore. 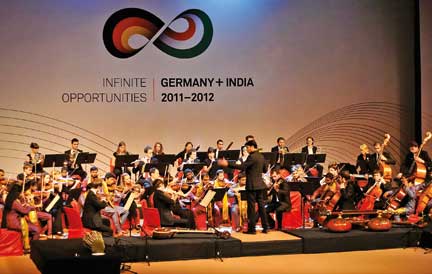 After I was selected, each step with the IYO has been packed learning – knowledge of orchestral repertoire, technique advice in playing the instrument, individual training, and understanding the musicality involved in the works we learn, apart from so many other details that I now feel I could have found only here in this intensive musical atmosphere, one of a kind in India. Interacting with people from across the country enhanced the experience. United by our love to learn, play, and enjoy music, we are the essence of India’s young talent in Western Classical music. We had our first workshop in Kolkata in April and on the last day – 26th April – we performed a concert where we played the works of Benjamin Britten, Tchaikovsky, Vivaldi, Pachelbel, Edward Elgar, and Dvorak at Kala Mandir Auditorium.

Life has been a beautiful musical journey ever since. Opportunities came running our way! We became a part of the Young Euro Classic Orchestra Germany-India that was invited to play for the German Chancellor at the inauguration of the Year of Germany in India to celebrate 60 years of diplomatic ties between the two countries. Among the works we played were Beethoven’s 8th Symphony and Mendelssohn’s Meeresstille und Gluckliche Fahrt- Calm Sea and Prosperous Voyage, a rare opportunity since we had woodwinds, brass, and percussion instruments and stringed instruments players from Germany! Playing alongside them was a thrilling experience and it was not only a chance to enhance and exchange our musical knowledge but also the responsibility of representing our country and strengthening our bonds with Germany and making new friends.

Making global connections is a major step towards exploring the international scenario, grasping the intense amount of hard work it takes to reach a certain level, and taking the necessary steps with the right attitude to achieve greater heights. Every lesson with the faculty of the IYO has made a difference in my playing and has improved me as a violinist. It is a blessing that I will always be thankful for and I look forward to our future projects with enthusiasm.

Music gives me a kind of joy that nothing else can. Since I have been pursuing music as a serious hobby from a very early age, it has become a part of me. Music is relaxing and improves concentration, memory power, motivates you, and helps you connect with yourself in a better way, which in turn makes you more focused. Balancing school and music was a lot of fun! I studied in Sherwood Public School, where each student was recognized for something beyond academics. I enjoyed playing the violin for the school choir. Each time I had to miss school for a violin exam or a concert rehearsal, my teachers encouraged me, attended my concerts and gave me all the support I needed and more! What more could I ask for?

I am pursuing my Bachelor of Arts in Literature, Political Science and Mass Communication in St. Francis College and am currently in my 3rd year. On some days, academics are given more importance, on some days, music. But there is nothing I would rather do than study music full time. When I hear someone say that music is no longer a part of them because of studies, I wonder why a choice like that has to be made. Sometimes, one thing complements the other so perfectly that if you let go of one, you might be taking one step back when you can take two steps forward…. Music coupled with academics is an ideal, and recommended, combination.

My desire is to constantly improve myself as a violinist…there is always something new to learn, something to improve, a new finding that can change your outlook overnight…there are so many musical works that I would like to learn. I would also like to pursue Music Composition for films and theatre. I recently composed and performed live background musical scores for Victor Hugo’s Les Miserables produced by city-based theatre group Ingenium Dramatics-August 2011. Nothing can compare to the wonder of listening to one’s compositions live, to the joy of creating music. I am going to study music full time once I complete my BA and am applying to music conservatoires in Europe the coming year. I would also like to continue working with the India Youth Orchestra.

The author is a student of St. Francis College and can be reached at [email protected].