At a very young age, school-going-children are taught that the capital of India is New Delhi. From the time they begin to wield the mighty pencil, the idea that every sentence is to begin with a capital letter is repeatedly dinned into their tiny heads by the teacher. We have a capital letter, and we also have a capital for a country or state. Children, who are generally very curious about things, seldom ask if there is a connection between the two ‘capitals’. Are they related? Do they come from the same source? If your common sense suggests they probably do, then you are right on the money.

The word ‘capital’ is derived from the Latin ‘caput’, meaning ‘head’. The ‘capital’ of a state or country is the ‘head’ of the state/country. In what way is New Delhi the ‘head’ of India? Well, it is the place where the head of the government is situated; in other words, it is where the seat of government is located. As to why the first letter of the first word of a sentence is invariably capitalised, the answer is fairly simple – the first letter is the ‘head’ of the sentence. As it comes right at the beginning of the sentence, it has to be capitalised.

We have seen so far that ‘capital’ can refer to the ‘head’ of a country or the ‘head’ of a sentence. But what about the ‘head’ or ‘caput’ on our shoulder? Are there words which can connect ‘capital’ to human heads as well? Yes, there are. Whenever someone commits a crime, our judicial system requires that he stand trial (this is assuming that the police manages to apprehend him!). The accused is not immediately thrown into jail for a lengthy period; he is presumed innocent till found guilty in a court of law. It is only after a lengthy trial, when he has heard both sides of the argument, that ‘his Honour’ decides the fate of the accused by giving his judgment. If the crime is heinous enough, the Judge might decide to give the felon the death penalty. Such punishments are usually called…. once again, you’re bang on… capital punishment. 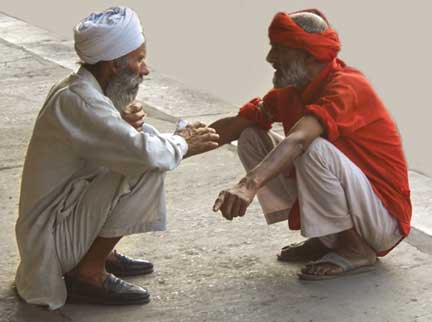 Why is the death penalty often referred to as ‘capital punishment’? What does this form of punishment have anything to do with the ‘head’? In countries like India and Pakistan when a judge condemns an individual to die, he is usually hanged by his neck, and not by his head; in so-called ‘developed’ countries like the United States, the prisoner is either given a lethal injection or ‘fried’: tied to a chair and electrocuted! So where does the head come in? You must remember that capital punishment has been in existence for hundreds of years. In the old days, how were convicted felons put to death? Do you remember the line the Queen of Hearts in Alice in Wonderland chants as a mantra whenever someone does something wrong? Yes, it’s ‘Off with his head’. And that’s exactly what the term capital punishment meant in the bygone days – chopping off one’s ‘capital’ or head. It is from this act that you get the word ‘decapitate’: the prefix ‘de’ means ‘off’ and ‘caput’ as you know means ‘head’. So when you cut off someone’s head, you ‘decapitate’ him.

Just as we have lost sight of the fact that the word ‘capital’ means ‘head’, there are many other common words which we use in everyday contexts which mean ‘head’. Take for example, the word ‘chef’. Nowadays we use it to mean ‘cook’. But this word of French origin is related to the word ‘chief’ and both mean ‘head’. Five-star hotels boast of a ‘Head chef’; this title is quite absurd because the term literally means ‘head head’.

Cabbage is a word that we have encountered several times in this column. Germans are contemptuously referred to as ‘sauerkrauts’ (meaning ‘sour cabbage’) by the British. Do you have any idea what the word cabbage means? The word comes from the Old French ‘caboche’ which in turn comes from the Latin ‘caput’ meaning ‘head’. Therefore, when people talk about the ‘head of cabbage’, they are talking about the ‘head of a head’! Rather strange don’t you think?

Perhaps all this talk about capital is making your head spin! Common sense suggests that I bring to an end this private conversation, this little tete-tete. Do you know that the word ‘tete’ comes from the Old French ‘teste’ meaning ‘head? A tete-tete therefore is a ‘head to head’. Before you clobber me on my ‘caput’, I think I better stop. Capital idea, did you say?