The role and importance of student clubs in school is well established. However, schools often fail to have a coherent plan of exposure and experiences for students because the syllabus is given priority and it needs to be completed before the term ends.

From time to time, government bodies circulate orders to schools asking them to initiate different programs (e.g., establishing reading clubs, science clubs, school greening) and seek students participation in them (e.g., the Inspire program, Children’s Science Congress, debate and essay competitions). Several times, the schools seem inadequately prepared to respond to such circulars. This lack of preparation partly stems from an absence of planning as well as the scope to creatively orchestrate school activities.

In this article, we will share our experiences of reviving the eco and science club in our school. This will highlight how our work is in sync with the overall goal of school improvement within the framework of external expectation.

After an initial discussion among colleagues at school, we had a meeting in December with students studying in classes 5 to 7. In the initial discussion we tabled a proposal to form an eco-club and a science club in school. The role, function, nature of club activities, and expectation were also discussed. After a short discussion, the students formed the two clubs and organized two separate meetings. A sample of the clubs’ work is presented here:

Proceedings of the eco-club
A total of 33 students became members on the day this club was formed. The present strength is 35. Ten office-bearers were also elected on the first day. The designations include president, vice-president, secretary, joint secretary, treasurer, co-treasurer, public relations in-charge, co-public relations in-charge, club coordinator, and co-club coordinator. Members named the club “Green and Clean Earth Club”, and wrote a pledge to be taken at the start of their meetings, and designed the logo of the club.

During the tenure of three months, the club organized five meetings. In the first meeting, the members discussed the role of eco clubs in the school campus as well as in the locality. They identified a few major environmental problems in the locality, such as pollution, garbage dumping, open defecation, and discharging effluents into the river, which could be solved by the club.

At the next meeting, the members chalked out six possible activities. These included plantation in the school and locality, particularly fruits and vegetables in the school garden to make the school self-sufficient; not harming and destroying plants; watering plants; not burning waste; finding ways to segregate and manage waste; and cleaning the school campus twice a month. Under the category of waste segregation and management, members decided to use the waste materials in art and craft activities, papier maché work, science experiments, and disposing biodegradable materials (dead plants, fallen leaves, weeds, banana peels, egg shells, food remains) in the compost pit.

At the third meeting, the members discussed the role of insects in the environment and their ecological importance. They decided to collect dead insects found in the campus and explore the biodiversity. They also felt that the collection of insects would help them academically as they could research the structure, habits, habitat, and other important information related to insects. In this meeting, they also decided to calculate the amount of waste in the school and keep a record.

The fourth and fifth were joint meetings held among the members of eco-club and science club. At the fourth meeting, members of both the clubs discussed their work and how they could help each other. Suggestions were given for different activities. At the fifth meeting, the members discussed and planned about celebrating science day in the school. 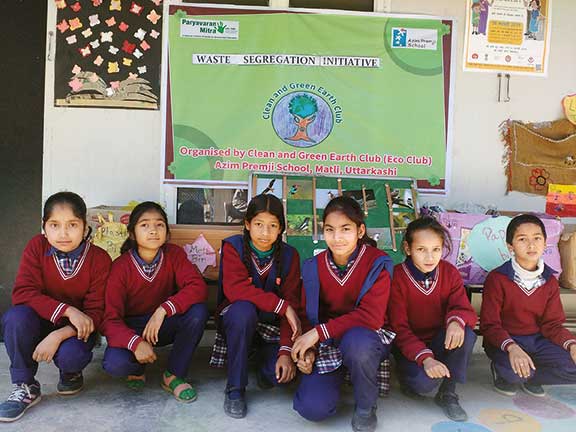 Activities carried out by the eco-club
The eco-club worked on two major areas. One was waste management in the school and the second was to reduce wastage of water in the school. The first one is an ongoing process, while the second is a pilot project.

Waste management
Some members of the eco-club regularly collected waste from classrooms and office after school hours. They took an average of 30 minutes to collect all the waste and segregate it under the category of paper, plastic and polythene, metals, bio-degradable materials, and other materials. Papers were further categorized under newspaper, one and both sides clean paper, both sides written papers, coloured papers, pages of books, and bits of paper. These were reused in the classroom for writing, art and craft work, and for TLMs. A large portion of paper was soaked in water to make papier maché. The bulk of the materials were stored for further use. Biodegradable materials were dumped in the compost pit.

Members weighed the segregated materials. The waste was then deposited in four bins each designated for paper, metal, plastic, and mixed waste. Students were requested to segregate the waste during their spare time. It was decided that the eco-club would continue the work and come up with a sustainable plan for waste management in school.

The details of the segregated materials are presented in the table below.

Reducing water wastage
In a separate project, students of grade 7 discovered that a lot of water was wasted while washing plates before and after a meal. They took the initiative to reduce this amount of water and announced during the assembly that students as well as staff members should not wash plates before a meal if the plates were clean. Some members of the club took up this responsibility and supervised on a regular basis.

Later, it was decided that the eco-club along with the science club members would conduct a water audit in school and propose a viable way to reduce wastage of water in school.

Proceedings of the science-club
A total of 21 students became members of the club on the day the club was formed. The strength now is 23. Seven office bearers were also elected on the first day. The designations include president, vice-president, secretary, joint secretary, treasurer, public relation in-charge, and club coordinator. The members named the club “Vigyan Prayogshala”.

During the tenure of three months, the club organized seven meetings and two of them were with eco-club members.

Activities carried out by the science club
The science club organized three major events till date from its inception. These were organizing a science quiz during school morning assembly, science day, and a reading session on a science theme, all in the school compound.

Science quiz
The science quiz was organized for the students of classes V to VIII during the morning assembly. Five of the science team members drafted the questions and put them to the entire group.

Celebration of science day
Azim Premji School Science Club Vigyan Prayogshala celebrated Science Day on 28th February 2019. The club members along with the coordinator planned the events over multiple meetings held after school hours. The team invited the nearby schools, parents, and the entire school community to participate. Students of classes I to IV, VI, and VII made several models and experiments to demonstrate before the visitors. Students of class V participated in managing the program. The events had the following components: science stalls, posters on the production and consumption of conventional sources of energy, a book stall, a documentary show, a question-answer session, a quiz, a debate on “Only development in science can eradicate poverty”, and the last, ‘Draw a scientist’.

Reading session
Despite March being a busy month with examinations and annual days, the club explored the possibility of organizing a reading session of books and magazines related to science.

The activities carried out by the clubs were based on regular academic work and consistent with the broader learning objectives. Students had to engage themselves academically even while drafting questions for the science quiz, doing science experiments and demonstrations, participating in the reading sessions and science exhibitions.

The activities carried out by the eco club helped students develop principles of classification, strategies of separation, like reduce, reuse, and recycle. At the same time, this kind of active engagement also helps develop environmental responsibility among the students. By carrying out waste segregation and waste management, even on a small scale, students will learn that environmental activism is an attainable reality and everyone can be a change agent through their individual and collective action.

The authors are from the Azim Premji School, Matli, Uttarkashi. Saurav Shome is interested in science education and Archana Dwivedi teaches science and has a keen interest in sustainability education. They can be reached at [email protected] and [email protected].