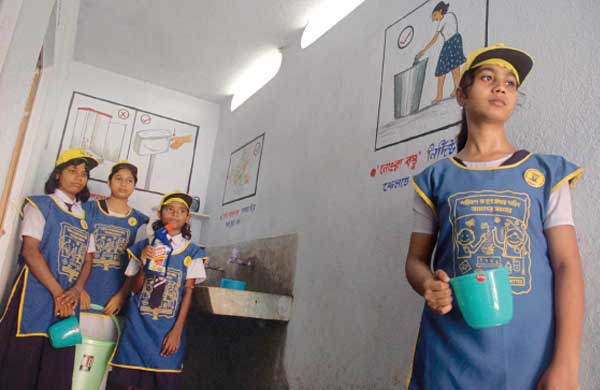 CLEAN toilets with running water are keeping girls in school and bridging the gender divide at six government-aided schools in Bishnupur I in West Bengal’s South 24-Parganas district. The schools here have spotless toilets thanks to the efforts of Nishtha, an NGO, and Water for People, an international funding group.

Ever since improved toilets with incinerators were installed, no child has dropped out of school. Earlier, around eight per cent of girls would leave school between Class 5 and Class 7.

“The improved toilets and running water are a major incentive for them to attend regularly and not be absent,” says Mrinal Kumar Das, proudly. He is an assistant teacher at the Kaastekumari High School. “In fact, in a Muslim minority area, where girls are generally married off at puberty, the improved toilets and hygiene awareness camps have brought in a revolution of sorts. Our students are now keen to study further after finishing school.”

Not only the girls, but female teachers and staff are grateful to Nishtha for providing the toilets. The NGO works in the area of water and sanitation.

Jaya Karmakar, a teacher at the Kaastekumari High School, joined the school 30 years ago. It takes her three hours of commuting each way to get here from Beleghata in north Kolkata. In the past, once she reached school, using the toilet would be a nightmare since there was no running water. There was no tube-well either. A peon would fetch water from a well across the road and store it in the school’s premises. This water was all that students and teachers had access to through the day.

Roma Mandal, an employee who travels all the way from Amtala, one and a half hours away, says, “It was terrible during my periods. Using the toilet after having traveled all that distance to school was a nightmare.”

“Boys and girls would just excuse themselves from class and go behind some bushes outside to relieve themselves”, explains Hasanuzzaman, also an assistant teacher.

The students at the Gabhena Chhatrabandhu Vidypith in the same block did have running water in the toilet. But the school had just one toilet for 1,864 students. For the girls, using the toilet during their periods was tough. There were no facilities for garbage disposal either.

Not surprisingly, girl students would be frequently absent. Once they reached puberty many would just give up and drop out of middle school.

At the Gabberia Chhatrabandhu Vidyapith ever since the improved toilets, drinking water taps and wash rooms were set up, water and sanitation (Watsan) committees, comprising boys and girls, have set new precedents in self-governance and teamwork. Each committee has 10 members and is annually appointed. It maintains the toilets by collecting a fee of Re 1 per student per month. This is used to buy phenyl, soap, sanitary napkins, toilet brushes and buckets to keep the toilet clean and hygienic. The committee also talks to students about hygiene and cleanliness once a week during their environment studies class.

Although the Vidyapith is in the rural outskirts of Barulpur town, its premises are immaculately clean. Every schoolgirl now flushes the toilet after use, washes her hands after using the toilet, and uses the single wash room connected with an improvised incinerator to dispose off her sanitary napkins. Depending on need, the used napkins are burnt in the incinerator once or twice a week to maintain hygiene and prevent any accumulation of unhealthy garbage. The toilet for the boys is also clean.

Although the Kaastekumari High School cannot compare with the Gabberia Chhatrabandhu Vidyapith in terms of overall cleanliness, the toilets are well-maintained and clean.

“Since this school is in the interior, awareness levels among students were very poor when we first started work,” explains Jharna Bari, a Nishtha instrusctor. “There would be bits of paper, pencil scrapings and peel strewn all over the classrooms. Once the children were trained at environment camps on our premises and came into contact with students from other schools, there was a sea-change in their attitude.” 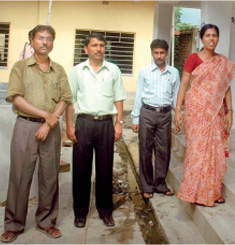 Today, students in this school never relieve themselves outside. Working shoulder to shoulder with the boys has given girls a fair measure of confidence. The boys too have started treating the girls with greater respect. “Boys realise that girls can be equally efficient and earnest about making a difference,” says Sunil Kumar Ghosh, assistant teacher at Gabberia Chhatrabandhu Vidyapith.

In West-Bengal 1.04 crore children enroll in primary school but just 14.05 lakhs make it to secondary level. More than half dropout at middle and secondary levels as per the statistics compiled by the Bureau of Applied Economics and Statistics, Government of West Bengal in July 2007. If the Sarva Shiksha Abhiyaan is to make any headway the need of schoolgirls on the verge of puberty must be kept in mind.

This article has been reprinted here with permission. The article was first published in Vol. 6, No. 12, November 2009 issue of Civil Society.