THE INCIDENT: I was teaching the students of class II when faced with the situation I am about to describe. I had given the class an English test. The students who finished their test in the given time, left for their computer class. There was one boy in class, Anil*, still writing the test.

Anil was a fairly bright and well-behaved child. So I gave him an extra 10 minutes to finish his test and hand in his answer script. After a while, I noticed that he had hidden his notebook in his desk and was copying the answers from it.

I had various options in my mind on how to deal with this situation.
Option 1: I could scold him, tear his answer script and drop it in the trash bin.
Option 2: I could take him to the Head Mistress’ office and have him punished.
Option 3: I could call his parents and speak to them about his bad behaviour.

But I didn’t feel it was wise to tackle the situation with any of the above options. Knowing the kind of child he was, I felt that the situation needed a totally novel or rather a different approach. I went up to him and took away the answer script from him. I explained, “This is not the right thing to do. I wouldn’t like you behaving in this manner in future.”

I asked him to go to the computer class and began the task of correcting his answer sheet. He hadn’t been able to complete the test but I gave him the marks for whatever he had been able to answer.

I didn’t discuss this matter with either the Head Mistress or his parents. I didn’t wish to make a big issue out of a wrongdoing that a child of class II had committed. 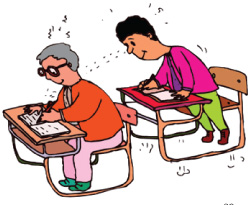 A few days later, I had a surprise visit from his mother. She was very apologetic and distressed about the entire matter. She couldn’t believe that her child could do something like that. After giving her a patient hearing, I asked her how she came to know of it. “Anil told me about it himself,” she replied. “Don’t you think then you should appreciate your child’s honesty?” I asked. “By realizing and confessing to his wrongdoing he is making a conscious effort to correct his mistake. I am sure he will never cheat again.”

Anil, in the later years, was selected to be one of the office- bearers of our school … a job which needed responsible and able students.

The author is a teacher at Gitanjali Primary School, Begumpet, Hyderabad. She can be reached at [email protected].