The person who came up with the rather curious saying, ‘Honesty is the best policy’ couldn’t possibly have been an Indian. As a race, we are not genetically programmed to be honest, and if by some quirk of fate, an Indian is born with this gene in him, and this unfortunate individual chooses the path of the straight and narrow, then he is condemning himself to play the role of Sisyphus. For those of you who are unaware of who Sisyphus is, well, he was a Greek who was asked by the sadistic gods to push a huge rock to the top of a hill and leave it there. The only problem was that every time Sisyphus managed to take the boulder to the top, it invariably rolled down, and the cursed man would begin the neverending task all over again. 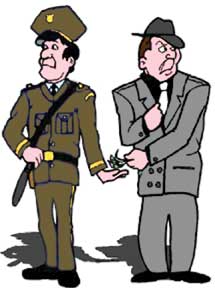 Just as it was impossible for poor Sisyphus to ensure that the rock remained on top of the hill, it is very difficult for the inhabitants (permanent or otherwise) of this country to remain honest. In order to get anything done in this glorious land of ours, we need to bribe people. It’s a practice that lesser mortals like you and me are often compelled to participate in: we pay a little extra to get a reluctant auto rickshaw driver to take us home, and we unhesitatingly hand out a ‘sweetener’ to the driver for bringing a tanker of water that had been promised a week earlier. If you go to any government organisation, nothing moves without money changing hands. In India, we sometimes call this ‘chai ke paise’, but in most other countries, it would be considered a ‘bribe’.

Whenever we hear the word ‘bribe’, the image that immediately comes to mind is that of a pot-bellied politician receiving an expensive looking briefcase containing a lot of money. But do you know that the original bribe had nothing to do with money? Money in informal contexts is sometimes referred to as ‘bread’ and ‘dough’. And believe it or not, the original bribe was exactly this – bread. The word comes from the French ‘bribe’ meaning a ‘lump’ or ‘piece’ of bread. In the old days, people who were fairly well-to-do used to carry pieces of bread in their coat and trouser pockets. These fragments were not meant for the pigeons in the park or the ducks in the lake: they were meant for the beggars who used to constantly harass people on the street. In the 13th and 14th centuries, the cities of Europe were infested with beggars, and they made life miserable for the pedestrians. In order to escape from a persistent beggar, people used to offer him a piece of bread; if several beggars harassed an individual, the standard practice was to grab several pieces from the pocket and hurl them into the air. While the beggars fought for the pieces, you made good your escape.

Maybe the next time a politician asks for a bribe, we should give him a piece of bread! Talking about bread, if you had walked into an English bakery in the early 9th century and asked the owner for a loaf of bread, he would have shaken his head and said, “Seriously, Sir, tell me what you need.” Why would the owner have said this? Because in Old English, the word ‘bread’ meant a ‘little piece’ or ‘fragment’; in other words, it meant the same as ‘bribe’. Therefore, when you asked for a loaf of bread, you were requesting for a loaf of fragments! If you wanted bread as we know it now, you would have simply asked for a ‘loaf’. The word ‘loaf’ has come to us from the Old English ‘hlaf’ meaning ‘bread’ or ‘loaf of bread’.

Since bread played a vital role in the life of early Europeans, it isn’t surprising that the English language contains many words related to or derived from the word ‘bread’. Take, for example, the word ‘pantry’. The modern meaning of this word is a room or cupboard where food is kept. When it was first used in English, a pantry was a place where people stored bread. The word ‘pan’ comes from the Latin ‘panis’ meaning…. you guessed it, ‘bread’. But then, man doesn’t live on bread alone, does he? Life would be rather boring if he limited himself to the starchy substance. He needs people with whom he can share his food, he requires companions with whom he can share his joys and sorrows. To enjoy life, he needs to be in the midst of good company. ‘Company’ and ‘companion’, both words like the word ‘pantry’ have bread (‘pan) in them. Is there a connection between these two words and ‘panis’? Yes, there most certainly is. ‘Com’ comes from the Latin prefix ‘cum’ meaning ‘with’ and ‘pan’ in French means ‘bread’. A ‘companion’ is someone with whom you shared your bread; the same is true of the word ‘company’ as well. But in order to share the bread (hlaf), someone has to first make it. And who is it that generally makes bread? The lady of the house, of course! Nowadays, when we use the word lady, the image that springs to mind is that of refined woman of some social standing. ‘Lady’ comes from the Old English ‘hlafdige’; ‘hlaf’ as we know means ‘loaf’ and ‘dige’ means ‘kneader’. A lady was someone who kneaded bread; she was someone who made bread. If the ‘lady’ of the household made bread, what did the master or lord of the household do? Merely eat it? Not exactly! ‘Lord’ is derived from ‘hlaford’ meaning ‘keeper of bread’. He kept it and provided it to the members of the family as and when required. Perhaps the House of Lords should be renamed ‘House of Bread’!