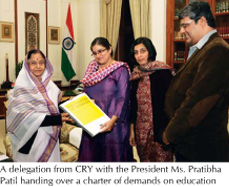 On 11 December 2009, a group of 1000 people walked to Bal Bhavan, New Delhi in support of three key demands on the Right of Children to Free and Compulsory Education Act 2009. December 11 was the 17th anniversary of India signing the United Nations Convention on the Rights of the Child (UNCRC) to demand the right to education for every Indian Child.

Organized by Child Rights and You (CRY), the Campaign for Children’s Right to Education demanded that

The 1.5 km symbolic walk had prominent activists like Jean Dreze from the Right to Food Campaign, Nikhil Dey from the Mazdoor Kisan Shakti Sangathan and Advocate Ashok Aggarwal from Social Jurist all who spoke out about the urgent need to amend the Act in letter and in spirit, in order for this fundamental right to be attained by all Indian children.

Later a delegation from CRY met the President Ms. Pratibha Patil in the Capital to hand over a Charter of Demands on education that was signed by 7.7 lakh people from across the country. They drew the President’s attention to the gaps that need to be filled to make sure that the Right of Children to Free and Compulsory Education Act 2009 reaches every child in India.