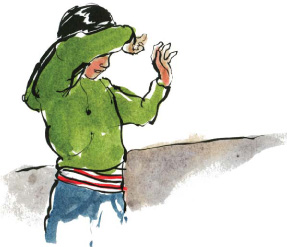 Shishuvan, a community school in Mumbai, has grown organically since its inception in 2001, adding a new class every year. This has given all of us, teachers and students, adequate time to look into the needs of each class. In June 2006, we began Std V, which is the transition class from primary to secondary. By the end of the first term, in November 2006, we felt we were ready to set up the Student’s Council. We decided that each of the four ‘houses’ (to which students are assigned through a lottery system) would elect a boy and a girl representative. The representatives would elicit interpersonal and school related issues from their housemates, which needed to be brought up in the Council (comprising the entire class). Also, the students would elect a speaker from the class. We requested the students that as the Speaker would be the regulatory authority for all proceedings, they should vote for the student most likely to be accepted as the leader. After the issues had been prioritised and discussed, students and teachers would have to vote on them. Teachers would have a veto vote, for use as a last resort to deal with unfair decisions.

The elections created a number of upsets, with sure winners losing to children who rarely stood out as leaders and opinion makers. As soon as the officebearers were in place the students began to negotiate a date and time for the council meeting.

The first meeting was interesting but unruly, with the Speaker and some representatives trying, through uncertainty, chaos and hullabaloo, to create a procedure for validating the issues put up for discussion. In the second meeting a remarkable feature was the eagerness with which children were tagged as ‘problems requiring punishment’. Recommendations on improving the behaviour of such students ranged from ‘create a warning word to remind him to be good’ to ‘suspend him for a week!’ Interestingly, the gentler punishments were completely out-voted.

The inherent violence in the students made me wonder at the ease with which the tit-for-tat attitude is accepted as justice. At first, the middle of the road students stood by and watched as others took on the roles of heroes (the charmers, the intelligent, the talented) and villains (the left outs, the aggressive ones, the attention seekers). Little did these students realise how their passivity was shaping both the heroism and villainy. They further camouflaged their part by spontaneous membership to mobs within the Council, and attempted to appropriate power by shouting encouragement to the hero and damning the villain.

In response to this attitude, I began discussing collusion and its consequences with the students. I realised that for pre-adolescent children, the creation of rules by teachers and principals, against which they can rebel, has been the traditional method of creating a sense of identity. The challenge for schools in the coming years lies in enabling the students, instead, to identify and live by their own ethical rules based on justice and mutual respect. We must be able to elicit from students, their felt need to receive and provide justice, seek appropriate methods of meeting it and use it in their lives within the classroom. We must be able to demonstrate how Gandhiji’s satyagraha, when practised as it was meant, can create an equal and just community. I believe we can only do this by modelling and encouraging those responses, wherein bullying, isolating, or thieving in school are met with firmness, compassion and persuasion rather than hatred, punishment and violence.

Kavita Anand can be reached at [email protected]