Fifteen years ago when I was teaching regular class in an English missionary city school for boys, it struck me that the uniform they were obliged to wear was very expensive. It comprised: white shirt, white pants, school tie, school badge, school belt, white socks, black shoes. In the monsoon it must have added hugely to the burden of the parents to turn their children out clean and tidy everyday. So I discussed with the Principal the acceptability of offering the children an option: white pajama-kurta, with only the school badge as identifying insignia. Foot-wear ‘ad lib’. The Principal accepted. In view of the important fact that we were originally intended for the poor, we recognised that at least the poor among the students would be happy with the little relief this might offer.

Of the 400 approximately who comprised the classes IX through XII, where the option was given, only about 30 youngsters accepted it – and they, not the poorest, not by a long shot. Some parents invaded my office in a body to demand explanation of this insult to them that such a uniform implied, and did I think their children were ‘village children!? My innocent inquiry as to what wascontemptible about village children went unanswered, and my explanation that this was not an imposition but an option met with hardly better grace. 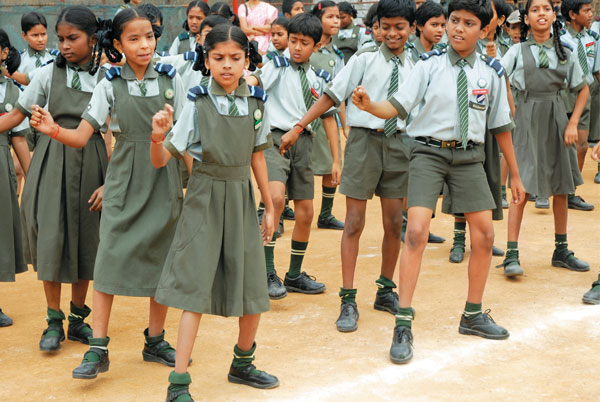 Anyway, the offer was maintained. After a few weeks, though, a few sentences appeared in white chalk on the deep red walls of the school within full view of all who cared to enter the premises. It was the sort of thing one is used to finding in boys’ toilets, but it was the first time we had encountered it here, in public. Enquiry revealed that it was a group of five children in one of the IXs, three of whom had chosen the less expensive apparel. The Principal dealt with the issue, and that was that.

Well, not completely. A month or so later, much the same thing appeared again, and once again the perpetrators were a small group of Xs, some of whom were of the pajama-kurta brigade. Sadly, the option had to be withdrawn, and with it the graffiti ceased to appear.

Troubled at the time, however, I went to the XIIs, and asked them to answer, first in writing and individually, then in teams of six, and finally through their team representatives in front of the whole class, what they thought was the connection between the proffered dress-code and the unsocial behaviour. It was startling for me to find the class unanimous that it was the uniform that kept them up to acceptable behaviour in public, and that, as they then acknowledged, without it their value system sank to insignificance. At that time we had a carefully calibrated and monitored Value Education (ValEd) system throughout the school. It was, therefore, not simply perplexing but deeply disconcerting to hear this comment on the flimsy influence of the school on their ‘inner’ lives.

We have kept up the ValEd work, but I have to admit with a lot less faith in its effectiveness than we used to – despite the encouragement of the famous educator Edmund Rice to the effect that ‘the good seed will grow up later on’.

On the same campus with this school we run another for very poor children, and within the past year or two we have taken girls into it as well as boys. They are ‘funneled’ in from a third project we have on this campus called Aashirvad, designed for the poor Hindi-speaking children of migrant parents in the locality. Seeing their poverty, the authorities in this school decided that the funneled-in youngsters need not wear a uniform, anything clean would be acceptable. However, almost all havescrambled together enough to get the associated skirt-and-blouse / shirt-and-trousers.

I was on a job recently in Uttarkhand on behalf of an NGO (called EGG) working for the education of poor girls on the outskirts of Dehradun. In a valley called Bindalpul, which one slithered into by a sort of path from the main road, the local team introduced me to the desperate plight of the people there. Our focus was, of course, on the school-age girls who were in fact not in school. The place was covered with plastics of every kind, and other detritus that didn’t help perfume the ‘blasted heath’. The children were largely unwashed, unhealthy-looking, bored. We spent some time there, but I shall pass it by, to get to the point of this particular experience.

At the far end of that valley we encountered a slightly more ‘respectable’ scene and a small government primary school, bricked, roofed, walled, painted. I was allowed into the classroom, on the left, Class III, on the right,Class IV, about 12 in each group. They looked bright and cheery, and responded willingly to questions I asked – despite my heavily-accented Hindi! Then one of the NGO team whispered to me that many of these girls were from Bindalpul. I was incredulous. Bindalpul! Dickens would have been hard put to sketch it as I had just seen it! But almost every girl in the class not just raised her hand, but did so with pride and appropriation. I was dumbstruck. What had happened to produce this amazing change?

Well, you know the answer. All these girls wore the uniform – red and blue. Yes, they were thin, and the uniform was not Burton’s Tailor of Taste, but it was the uniform and it was clean. Somehow, somewhere, they had scrambled together the resources to dress themselves for the job.

It is of course the drive to Belong, ranked third in Maslow’s famous pyramid of needs, that lies behind this compulsion. We casually use it to explain family, linguistic, state, team, and lots of other groupings in the sociology texts. But, its application in other contexts I had never seen demonstrated so convincingly, first negatively in that missionary school all those years ago, and now in Bindalpul. My previous misgivings about financial implications are a lot less powerful now, though the elaborateness of the outfit in the city is still cause for concern. But: uniform there must be.

The author is CEO of SERVE, an NGO and is also consultant to several teaching NGOs.