The Sixth Pay Commission’s recommendations that teachers be given substantially higher salaries is a welcome, if belated, recognition of the role of the academic community in building the foundations of our democracy. Teachers have gone unsung too long. 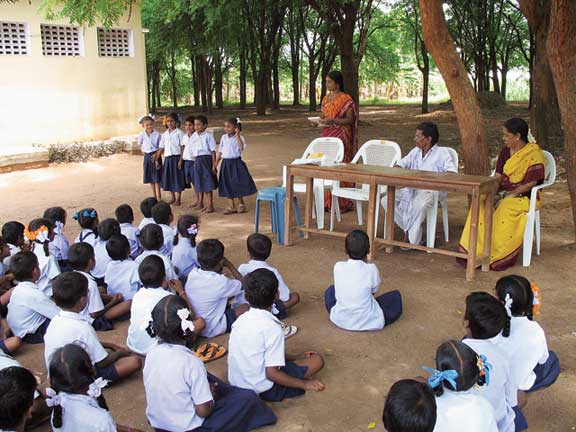 Yet moves to implement the new pay scales and pay back-wages to school teachers have led to an uproar. On the one hand, parents are reluctant to pay higher school fees. Private schools, on the other, say they cannot pay the new scales unless fees go up substantially. The issue is a highly contentious one.

At the start of the new school year parents received heavy demands for ad hoc amounts as extra fees from schools. These demands were hastily calculated and people suspected that schools had inflated their needs to profit from the situation.

In many cases parents found the fee hike simply unaffordable, especially if they had two or three children in school. The protests against the hike have been unprecedented. In several big city schools, non-functional PTAs were hastily resurrected and meetings called to discuss the issue.

At a PTA meeting of a prominent school run by civil servants, parents vociferously debated the fee hike for over two hours, asking for more transparency in the school’s accounts. They were in no mood to pay up. The irony was that about half the parents present were government servants who have themselves benefited from a big pay hike!

In places like Allahabad and Faridabad, parents’ groups held protest rallies outside schools and blocked roads to express their ire. In the IT hub Gurgaon, protesting parents pointed out that many of them have lost jobs in the current economic downturn and cannot afford to suddenly pay more fees. Some school managements privately acknowledge the problem and are advising parents to negotiate fees, staggering payments to prevent the withdrawal of children from schools. In Hyderabad too, there have been murmurs of protest to force managements to roll back the fee. In the recession-hit diamond processing hub of Surat, employers raised a token fund for unemployed diamond cutters’ children’s school fees but that is obviously not enough.

In December 2008 an ASSOCHAM study had anticipated the problem and opposed the fee hike which it expected would be in the 40 per cent range. ASSOCHAM said that given the economic recession, downsizing in the corporate world and inflation, a hike would put parents under severe pressure.

In Delhi, a parents’ group took the matter to the High Court. The Delhi government then told ‘unaided’ schools that they could increase monthly fees up to a maximum of Rs 500 (roughly a 20 per cent hike) but left a loophole by permitting undefined increase in development fees. In May 2009 the Delhi High Court permitted a 25 per cent hike in school fees, with retrospective effect. The case is still ongoing.

One consequence of the fee hike is a sudden rush for enrolments in government schools in the capital at the middle school level. Instead of the 1.40 lakh students joining the sixth standard, admissions in 2009 have reached a record 2.10 lakh. Ironically, Delhi’s Education Minister claims that this is an achievement resulting from its new, streamlined online admission system!

If schools are at the receiving end of parental ire today it is because too many schools have profiteered from benefits like state subsidised land, without passing on the subsidies to students. Schools have long been notorious for annual fee hikes and various other financial demands. Advocate Ashok Agarwal of the NGO Social Jurist says some schools made false representations to the government, inflating figures for the number of teachers enrolled, to argue that they be permitted to ask for more fees.

While parents in the metros and big cities may be able to pay up the increased fees, the situation is different in smaller towns. The principal of a small town private school in the interior of Madhya Pradesh fears that she will lose more teachers to government schools as she cannot pay higher salaries. Raising the fee, she believes, is not an option given the low incomes of most parents.

Meanwhile teachers in many private schools apprehend that they will not get the hike – and arrears are out of question. It is one of the ironies of our education system that government school teachers, among whom absenteeism has been found to be among the highest in the world, are being rewarded with monetary benefits while private school teachers, who lack the same bargaining power, are far less likely to benefit.

It is clearly time for more transparency in the financial management of schools and greater democracy in the school hierarchy. Schools cannot be treated like just any other private business.

The author is a veteran journalist and activist based in New Delhi who writes on gender and development issues. She can be reached at [email protected].