Natural and cultural sites of importance are identified by UNESCO. India boasts of 8 natural (eg: Great Himalayan National Park Conservation Area) and 29 cultural (eg: Champaner – Pavagarh Archeological Park) sites of importance. This series – 5 books – talks of 5 of these 37 sites. It is pertinent that the younger generation takes pride in this ‘national heritage’ and protects it. For this it needs to be aware of them, to know more about them. This series does that.

In each book, a personality well-versed with that particular site facilitates the visit of a group of children to the site. They move around the site and interact with the person who is sharing her/his knowledge of the place. The production values are high. The publishers and supporters appear to have taken the trouble to arrange for the trips. And, it helps that these books are diverse like the sites they talk of. The tone of the text and illustrations vary from book to book.

The series, though, made me wonder. Could they have also gone with local children, used public transport and had local food in lieu of muffins and cream-filled biscuits? Why are – other than for the book on Chatrapati Shivaji Terminus (CST) – people from around the site conspicuous by their absence? Is there a plan for these books to be brought out in Hindi and/or local languages? One hopes that visits to these sites do not go the tiger-tourism way; restricted to the rich and cut-off from most of the locals.

Each of the books, towards the end, has one page devoted for colouring. Given the age group the series appears to cater to, would a list of books and web links sharing more on the place be more apt than pages to colour? Or something for parents or teachers who would read the books to children? 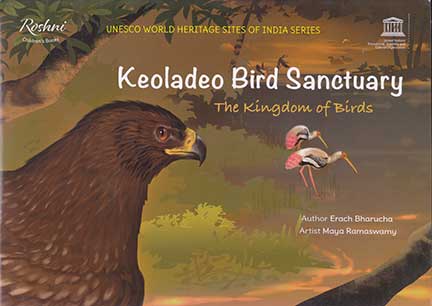 The book begins with common birds and the focus throughout is on these species; species the readers can come across in non-wooded areas as well. It stays away from the lure of glorifying rare species. While each of the species is identified, information about the birds has been conveyed in a light and simple manner. It teaches without preaching. Select terms have been clarified and here too confusion has been kept at bay by not bringing in either Latin names or legal connotations. The tone is where the books scores high. During my initial days of learning environment education I was introduced to Dr Bharucha as the grand-father of environment education in India. How would it be, I wondered as I read, to walk the forests with him?

The illustrations by Maya Ramaswamy, a well-known name in wildlife circles induce the reader to put in more time with the pages. They bring out the time of the day, the species’ preferred micro-habitat and more.

Two lines stuck. One of them left me baffled; “There was also a large herd of cattle that made dung piles to mark their separate territories”. I talked with a couple of friends who know more about cows than I but they too were not able to throw much light. The second line states, “They enjoyed the experience so much that one of them said, “I want to become an ornithologist too”’. It reminded me of a conversation with a senior educationist who had asked why, if a child loves painting, should s/he become a painter? Can s/he just not do it or enjoy it in a manner that s/he wants? 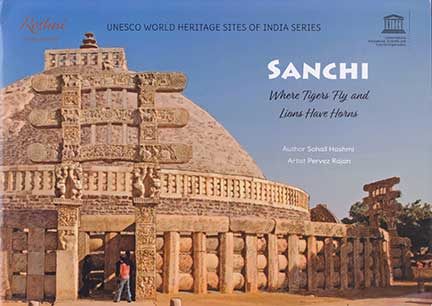 This is a book where the illustrations and text gel with each another and take the reader to the location. The nuances have been captured and efforts made to make the book ‘for children’. The book, for example, describes height and circumference of the structures using height of children as the unit.

The book clarifies terms like ‘monastery’ and mentions facts like presence of people from across Asia in Sanchi then. However, when the author is unsure, he leaves it open; every question does not warrant a definite answer. Like on the holes: “These look new, maybe they were drilled in the wall to allow rainwater to escape. When it rains, water can enter the Stupa through cracks at the top. If it doesn’t flow out, it will keep collecting inside and the Stupa might break because of seepage.” Or the buffaloes: “Every time I come here I wonder, there is not a single cow shown anywhere in the Sanchi engravings, but there are buffaloes everywhere! Was Sanchi and the land in this area far wetter 2,000 years ago when the Stupa was built?”

The author has a connect with children and he brings out his observations gently, “They saw things at their eye level and adults at theirs and so sometimes Sohail would be talking about a carved lion or a buffalo while the children were peering at a lizard crawling below the fence!” Also, “The children were not only different ages and heights but they also had different personalities, and this came out in the things that they noticed.” That he is good with words and enjoys what he is doing is apparent in lines like these: “Railings, walls and fences keep you out. Doors, gates and arches allow you in.”

I was reminded of the eloquence with which he had discussed the differences and similarities in cooking processes and tastes of biryani and pulao, and of course the dishes’ history. This was in the course of a television interview as he walked the lanes of Old Delhi; lanes he regularly walks in. 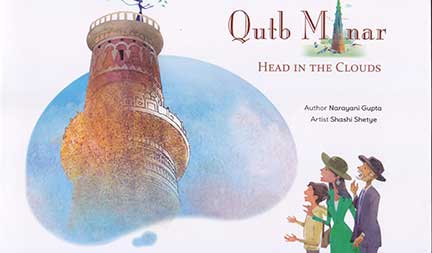 One of the more endearing evenings I have experienced in Delhi has been the one where I walked from the gate of the Qutb complex to Bakhtiar Kaki’s Dargah. During the unguided walk, I touched and smelt monuments spanning more centuries than the number of hours I walked. This book made me aware that that Qutb Minar gets its name from that dargah.

The first aspect which one notices about the book is the apt manner to spell the monument; ‘Qutb’ in lieu of the much more used ‘Qutub’.

The initial lines give simple explanations of the monuments en route Qutb Minar and also point out how we have cut the younger ones off from history. One possible explanation comes in the form of an accompanying child’s comment, “How will we learn anything if they put railings and ropes around every building?”

The book points out that so many of our historical monuments today exist in layers. Different parts built during different times in a manner deemed best suitable then and of course the damages and repairs. So what we see today may be very different from how the monument stood in its initial form. I was reminded of William Dalrymple’s classic on Delhi; City of Djinns.

The book presents nuggets from history. One of these informs the reader of a similar structure in Afghanistan and another of a castle in Spain boasting of similar architectural design. All these add to the fun. They can intrigue the young readers and have them looking for more.

Illustrations are dotted with flowers and butterflies. I have never figured out why books meant for younger ones have these. 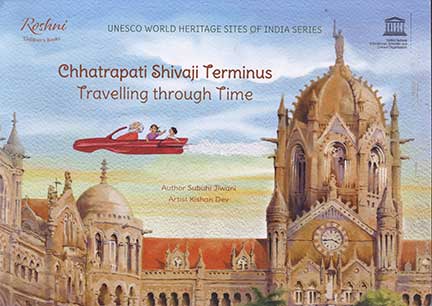 The book appears to be based on B K Jadhav, referred to as the time-keeper of Mumbai, who took care of the clocks at CST for multiple decades and has since retired. For all my love for trains and museums, I was not aware of the rail museum at CST which the book depicts. I will need to make amends during my next trip to Mumbai.

The first look itself had me wonder why anyone would put a plane (or a contraption on similar lines) on the cover of a book talking of CST; a name associated with trains and a magnificent building.

Mr.Frederick William Stevens is mentioned as the chief architect; it would have been good to also mention the style, the planning that went into designing the monument and the time it took to build! Besides being in awe of the scale and quality of the structures I have always been intrigued by the Britishers’ foresight, more so as some of these structures, including CST, we continue to use today, and how.

The editing is weak. The introduction, for example, has this line, “It was earlier called Victoria Terminus because India at that time was governed by the British.” The sheer number of trains and people who use it each day, the ethereal beauty of the structure, people’s reactions to the lights put up some years ago and much else. Also, CST has been witness to our freedom struggle (and a lot more) – but why does it find space here? Similarly, I was left wondering why space has been devoted to Griffin’s conversation with craftspersons about life, or Griffin’s spirit attending a party.

I know little of CST after reading this. 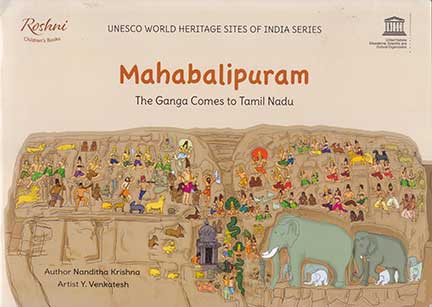 In the initial page, places en route – from Chennai to Mahabalipuram – are discussed.

The story and the narrative are weak. There are explanations which are not exactly interesting and the illustrations leave much to be desired.

The image where the student stiffly takes notes while the teacher observes, hands crossed, from a distance and the questions ‘typical’ of a teacher trying to test the knowledge of the students, both reminded me of textbooks during my time in school. That was years ago when the then generation’s notion of ideal students and teachers, as opposed to real world students and teachers, were depicted. The world has moved on since and so have the schools and books!

Then there are lines which make one wish that more time had been devoted to the text. This line, for example, warrants clarification of the local context, if there is one, given that coconut is part of the palm family: “Those aren’t coconut trees. They are palm trees.”

Conclusion
On the whole the series is a mixed bag!